Why Social Security Privatization Will Hurt the GOP 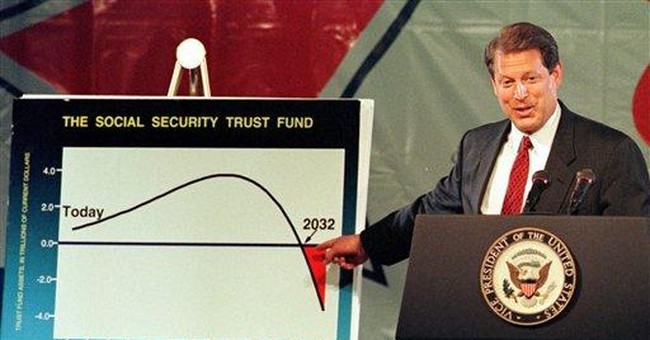 Vice President Biden was absurdly optimistic about the 2010 congressional elections in an interview with ABC: "I don't think the (Democratic) losses are going to be bad at all. I think we're going to shock the heck out of everybody."

I think Joe Biden is wrong. But if there is a dark cloud gathering on the GOP's cheery electoral prospects it is this: the GOP's support of privatizing Social Security.

Item: Sharron Angle is in some trouble. The latest poll has Harry Reid ahead 44 to 37 percent.

Of course, Reid is in even bigger trouble. Only 44 percent of voters say they will hold their noses and vote for him. The upside for Reid is hard to find. But he is already banking, among other things, on Angle's statements that she wants to get rid of Social Security by totally privatizing it. Reid's "What's Next?" TV ads highlight for seniors the emotional uncertainty of dramatic reform.

Traditionally, when conservative candidates fail because voters found them "out of the mainstream," pundits blame social issues. In a country where the two marquee conservativesocial issues -- abortion and gay marriage -- each now garner majority opposition, this is difficult to credit.

It is hard for me to understand why some GOP pundits push Social Security privatization as a pathway to victory.

Lest we forget, President Bush, fresh from beating John Kerry, decided to spend his political capital pushing partial privatization. He stressed that current beneficiaries would keep all their benefits, and that only younger Americans would get the privatization option. Yet polls showed the more he talked, the less Americans liked it.

"Three months after President Bush launched his drive to restructure Social Security by creating private investment accounts, public support for his program remains weak, with only 35 percent of Americans now saying they approve of his handling of the issue, according to a new Washington Post-ABC News poll," The Washington Post reported on March 15, 2005. "Moreover, 58 percent of those polled this time said the more they hear about Bush's plan, the less they like it."

And this was before the stock market crashed, and ordinary people at or nearing the age of retirement lost huge chunks of their investment portfolios. Yet in 2010, one of the GOP's bright young stars, Paul Ryan of Wisconsin, pulled together a deficit reduction plan that called once again for the partial privatization of Social Security, and leading conservatives piled on the praise.

In the July 12 Weekly Standard, Fred Barnes wrote: "For Republicans, the road map authored by Rep. Paul Ryan of Wisconsin is the most important proposal in domestic policy since Ronald Reagan embraced supply-side economics in the 1980 presidential campaign." He predicts it will be the pathway to power, a landslide election in 2010 and victory in 2012, and he praises in particular the Social Security "choice" proposal.

I hope he's right, but I don't think so. The influential Talking Points Memo website, smelling blood, is now circulating a television interview from the 1990s in which Rand Paul endorsed privatizing Social Security.

I hope both Sharron Angle and Rand Paul pull out their Senate races. But I also hope Republicans learn the true lessons from Obama. Americans do not like politicians who use genuine crises to push unrelated ideological agendas, right or left.

You can get a chunk of Americans to say they support privatization. But the people who vote on Social Security are going to be the people who depend on it, and they do not favor dramatic change.

Joe Biden is licking his chops.

I hope I'm wrong on this. But watch out.