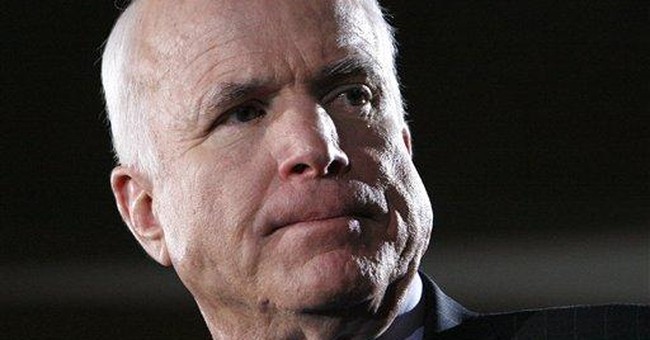 Did Mitt Romney just derail John McCain's Straight Talk Express? Not all the Democrats' and independents' votes in Michigan were enough to canonize John McCain, who barreled through Dearborn and Detroit congratulating himself for nobly ignoring voters' real concerns. In Michigan, Mitt "fight for every job" Romney trounced John "I cannot tell a lie" McCain.

Romney's victory in Michigan was surprisingly broad: He beat McCain among both men and women, older and younger voters, Catholics and Protestants, people with incomes above and below $50,000, college graduates and those with just a high school degree. Romney even bested both McCain and Huckabee among white evangelicals.

What kind of Michigan voters preferred McCain? Voters in the GOP primary who don't like President Bush, who oppose the war in Iraq and who report that they have no religion at all. Oh, and those who say they are not, in fact, Republicans.

Will the Straight Talk Express power back up and chug through South Carolina? If the Michigan contest was partly a test of the brand's power, the South Carolina campaign may derail its essential credibility.

The Annenberg Foundation's nonpartisan FactCheck.org just delivered a powerful rebuke to the basic honesty of a McCain mailer used in South Carolina (and defended by Sen. McCain after reporters called it to his attention).

McCain also had the chutzpah to charge Romney with failing to verbally support Bush tax cuts that McCain himself actually voted against .

FactCheck.org concluded that on the whole John McCain's portrayal of Romney's record as governor of Massachusetts was "so distorted as to discredit McCain's claim to be the candidate of 'straight talk.'"

St. McCain -- distorting the record and misleading the public? If you listen to former Pennsylvania Sen. Rick Santorum, that may not be as surprising as the branders want you to believe. In an unprecedentedly frank evaluation of a former GOP colleague. Sen. Santorum, who hasn't endorsed a candidate, said McCain is "very, very dangerous for Republicans" on domestic issues.

"The bottom line is that I served 12 years with him, six years in the United States Senate," he told WABC radio talk show host Mark Levin. "And almost at every turn on domestic policy, John McCain was not only against us, but leading the charge on the other side."

Sen. McCain apparently had a nasty habit of leaving one impression in public on social issues like abortion and marriage, and another behind closed Senate doors, according to Santorum:

"That discussion is held in private, where you're jostling and jockeying to get your legislation into the queue so that you can have your time on the floor to get something done. And I can tell you, when social-conservative issues were ever raised -- whether it was marriage or abortion or a whole host of other issues -- there were always the moderates who said: 'No, no, no, we can't. They're divisive, divisive, divisive.' And more often than not, John McCain was ... with them."

"That's wrong," Santorum added. "And that gives me an insight into what he would really be like if he were president of the United States."

The next night on the Mark Levin show, another even more respected and distinguished conservative voice, Judge Robert Bork, called McCain a "liberal."