What Washington Can Learn From Harry Potter 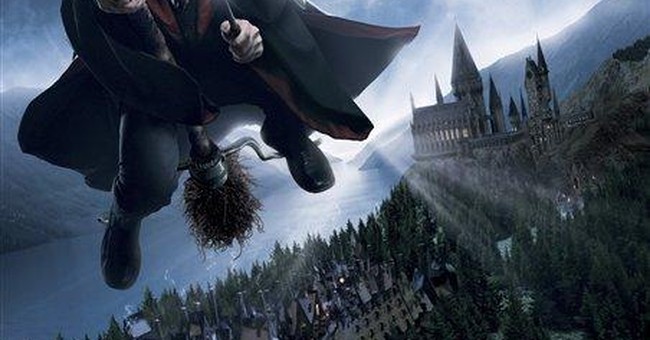 The new Harry Potter movie, in theatres across the country, represents more than just the culmination of a great, multi-billion dollar, adventure story.  Both Democrats and Republicans can learn from the story of a bold, courageous youth facing a powerful foe, for in Harry Potter’s tale there are some lessons that our leaders in Washington could use right now.

COURAGE: Albus Dumbledore advises Harry to have the courage to “make a choice between what is right, and what is easy”.  With a growing federal deficit and public debt at $13.8 trillion spiraling out of control, legislators must make some tough decisions on spending.  Like it or not, Congress needs to rein in federal spending and return the federal budget to FY2008 levels.  In order to do this, Congress will need to eliminate non-performing and non-essential programs, and eliminate the budget scope-creep that occurred when the Administration allowed $787 billion from the ill-conceived Stimulus spending was absorbed into the baseline of the federal budget.

Reducing the federal budget, eliminating earmarks and perhaps, even, freezing all federal civilian salaries will be unpopular and will be difficult because every federal dollar represents someone’s rice bowl.  The GOP, especially, has to be tough about the nimble NIMBYs (Not In My Back Yard) in congress, who masquerade as fiscal hawks and talk a good story about “sunlight” and “transparency” until the cuts come to their states’ or districts’ projects.

PREPARATION: Alastor Moody’s mantras--”you’ve got to be prepared” and “constant vigilance”, offer valuable lessons.  Congress, during this lame duck session, is much like the eye of a hurricane, seemingly quiet, but much damage still may come.  Many Democrats in congress still don’t seem to get it.  They do not seem to understand that American voters sent them a message when they voted earlier in November, that many Americans are deeply unhappy with the direction of the country under the leadership of 111th congress, Nancy Pelosi, Harry Reid and President Obama.

PERSEVERANCE: Rubeus Hagrid’s warning to Harry to “stick to your ticket” might be good advice for GOP legislators.  If they remember conservative principles and allow the principles of smaller, less intrusive government, strong military defense, lower taxes and a belief in American exceptionalism to guide their decisions, the country will be better off and they’ll do well at the polls come 2012.

SKEPTICISM: Harry Potter quickly learns that you can’t believe everything you read in The Daily Prophet.   Whether the wizarding paper, or one of our muggle-produced newspapers, over the past few years, Americans have seen multiple examples of mainstream media bias and controversial, media pay-for-play schemes.  Harry learns that Rita Skeeter is often more interested in starring in her story rather than objectively reporting the story and that government leaders often are unwilling to acknowledge mistakes or the full scope of a crisis.  It’s a tough lesson for our kids to learn that what they read in the daily newspaper isn’t always true and isn’t always thoroughly researched.  Congress would do well to look past the salacious headlines and go to primary sources for their information on federal programs and issues.

CAUTION: Congress might do well to remember the words of Gilderoy Lockhart: “celebrity is as celebrity does”.  There was a time when out-of-work, “resting”, actors played summer stock or regional theatre.  Now, they head for Washington.  It is embarrassing to watch members of congress falling all over themselves to meet with the multitudinous, Hollywood arm candy who breeze into town, advocating for their special cause.

Americans need congress to become frugal-minded because these celebrity appearances almost always involve requests for additional taxpayer dollars to support their “special” cause.   As Severus Snape says:“clearly, fame isn’t everything”.  Few of these glitterati have substantive expertise and many have only a superficial understanding of the complexities of the cause for which they so glamorously advocate.  At a time when our country is sinking under the weight of uncontrollable spending, the last thing Americans need is yet another pet cause to burden the federal budget.

Our nation faces many serious challenges.  Unwise leaders have placed our finances on a dangerous course, spending too freely and too foolishly.  Our government has grown too fast, and many Americans have lost confidence in many of the institutions that we once viewed proudly. Our country is engaged in a bitter struggle against terrorists and foes that wish to kill us.  Perhaps worst of all, during the past two years, our leaders in Washington, shamefully, have decided to avoid many of our worst problems, while making many others, such as our runaway spending, much worse.  Let’s hope that our leaders can learn from Harry Potter, apply some of these leadership lessons and get this “Mischief Managed”.