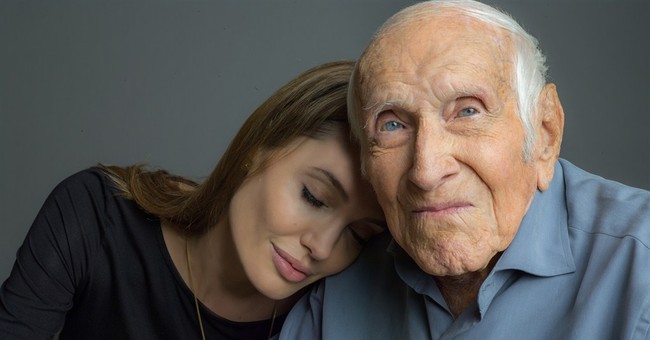 It’s not uncommon to hear someone say, “I’ve been waiting my whole life for this or that story to be made into a movie.”I can’t say that about UNBROKEN, though. I’ve only been waiting 57 years.

I was 4 when the movie rights to my father’s life story were acquired by Hollywood –and finally, on Christmas Day, it will reach the big screen in the new movie directed by Angelina Jolie and starring Jack O’Connell as my Dad, Louis Zamperini.

He got to see the film before he died –Angelina showed it to him on her laptop in his hospital bed –and he was ecstatic at how it portrays his triumphs and tragedies, up till now most famously told in Laura Hillenbrand’s New York Times best-seller also titled UNBROKEN. The remarkable beats of his life are all there: the troubled and troublesome kid who turned to running for a sense of purpose and wound up representing the U.S. in the 1936 Olympics. The World War II bombardier whose plane crashed in the Pacific Ocean in 1943 and who survived for an excruciating 47 days adrift in a life raft with two fellow servicemen; and the prisoner of war who endured unspeakable psychological and physical abuse at the hands of his unusually cruel Japanese captors.

What my father was most pleased about, though, is how Angelina handled the subject of his Christian faith. Dad, you see, survived the horrors of war physically unbroken, but returned to the states emotionally shattered. Suffering from PTSD, he tried to kill the pain with alcohol and was consumed by visions of murdering his chief Japanese tormentor, a sadistic man nicknamed “The Bird”by inmates. It was only when, at the urging of my mother, he attended a Billy Graham crusade in 1949 and surrendered his life to Jesus Christ that my father truly became unbroken. The nightmares stopped. So did the drinking. And he dedicated the rest of his life to serving others –especially wayward kids, through the establishment of his nonprofit organization, Victory Boys Camp Inc. (victoryboyscamp.org).

The film version of UNBROKEN does not spend a lot of screen time on his Christian conversion –detailing it in a series of text cards before the closing credits. And that is exactly the way my Dad and our entire family wanted it. As he said in his autobiography, DEVIL AT MY HEELS, “The great commandment is that we preach the gospel to every creature, but neither God nor the Bible says anything about forcing it down people’s throats.”

UNBROKEN tells my Dad’s story the way he told it: chronicling all he lived through so that what he did after becoming a Christian –forgiving his captors –would have the most resonance with audiences of all faiths, and no faith at all. I’ve talked to many people all across the country who have screened the film in advance, most of whom haven’t read Hillenbrand’s book and many of whom are not Christians, and their most common question to me is, “After all he went through, how was Louie able to forgive those guards who beat him so mercilessly?”Dad got those same questions, thousands of times over five decades plus, and he used them as an opportunity to explain how Jesus had removed the hate from his heart. Who knows how many people –hardened to the things of God –pondered his answer and now find themselves sharing heaven with my father because of it?

That was his greatest hope for the film version of UNBROKEN: not that it would be applauded by fellow Christians, although he certainly would have been honored and humbled by their appreciation; but that it would be seen by non-Christians drawn to a rousing epic about the indomitable human spirit who, when the credits have finished rolling, might just discover there’s a whole lot more to his story than that.

That’s worth waiting 57 years for.