If Government Is the Answer, What Could Possibly Be the Question?

Loyd Pettegrew
|
Posted: Jan 08, 2021 12:01 AM
Share   Tweet
The opinions expressed by columnists are their own and do not necessarily represent the views of Townhall.com. 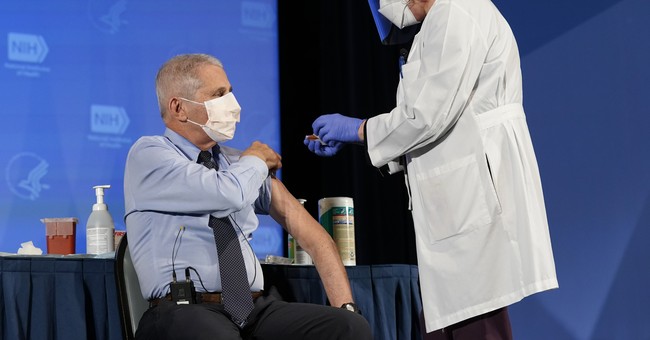 Editor's note: This column was co-authored by Dr. Pierce Roberts.

Our federal government finally rolled out both the Pfizer and Moderna Covid vaccines within a week of each other. This despite the fact that the Pfizer vaccine was actually approved in early November. Great end to a sad story, correct? Unfortunately, not by a long shot!

As Alexander William Skates points out in Why the Real Villain of 2020 Was Big Government, private enterprise outshined federal and state bureaucracies at nearly every turn regarding the pandemic, “Pfizer, Moderna, AstraZeneca, and many other companies did amazing work getting the vaccines developed as quickly as they did. Public health 'experts' repeatedly claimed a vaccine would not be available for 18 months, at the earliest.” Fauci also waved in the political wind delivering contradictory opinions rather than medical truth.

For U.S. citizens, the incompetently long arm of our government is at it again. This time they are mangling the distribution of the Pfizer and Moderna Covid vaccines to the very people it was developed for most—the elderly and infirm. For example, in Florida where we both live, actually delivering the vaccine to citizens is hopelessly mired in governmental incompetence and thoughtlessness. But sadly, Florida is not alone.

The websites and telephone lines of nearly every County Public Health Department have been crashed since early Tuesday morning—the public release date. We have a neighbor who drove by the Public Health Department office and was able to get in for a first Moderna vaccine…in 10 days. He drove by since he couldn’t reach anyone. He suggested one of us go down the next morning at 7 a.m. and try the same thing. I was there at 6:50 a.m. and was the seventh person in line. At 7:45 a representative came out and said, “If there anyone here who has an established appointment for the vaccine?” One person stepped out and she welcomed him inside. She told everyone else to go home and to keep checking either the website or keep calling.

When I explained that I had done that both on Monday and Tuesday and that their website had been down and the phone number rang busy, she just shrugged and said, “Not my department!” As the French, who are mired in the daily knee-deep muck of a top-heavy bureaucracy, say shrugging their weary shoulders,” Les Incompetent.” Other, less polite words may come to mind so, pardon our French.

Everyone in public health departments, of course, are “essential” workers and have received their Covid vaccines more than a week ago. People who are longer in the tooth with sundry core morbidities, not so much. The reality in the vast majority of cases is that government bureaucrats have adopted the Alfred E. Neumann attitude of “What me worry?” Meanwhile, the virus morphs into new manifestations which spread with renewed vigor as government drags their collective feet while cases pile up and body bags shroud the unfortunate dead. As Ronald Regan was quoted, “Government is not the solution to our problem; government is the problem.”   Rest assured their most important constituent is themselves.

There is a timeless fable that reflects the folly of trusting bureaucracy to deliver propitious services in a crisis. It is The Grasshopper and the Ants. The tiny foragers (our private sector) energetically work storing food for winter while the lazy Grasshopper (bureaucrats) goofs off until it is too late and a predicted “dark winter” descends. There was time to prepare distribution of life-saving vaccines with plenty of lead time but our Grasshopper fools that govern and control life-saving vaccine distribution consider themselves infallible and worse, unaccountable.

According to our greatest president in modern times, Ronald Regan, the nine most terrifying words in the English language are, “I’m from the government and I’m here to help.” He was so right back in the mid 1980s and he is even more so today. How many will need to die at the hands of Les Incompetent?

A worse problem is that our very same government doesn’t seem to even care to ask this very question about itself! As the great economist Milton Freidman once cautioned us, “One of the great mistakes is to judge policies and programs by their intentions rather than by their results.”