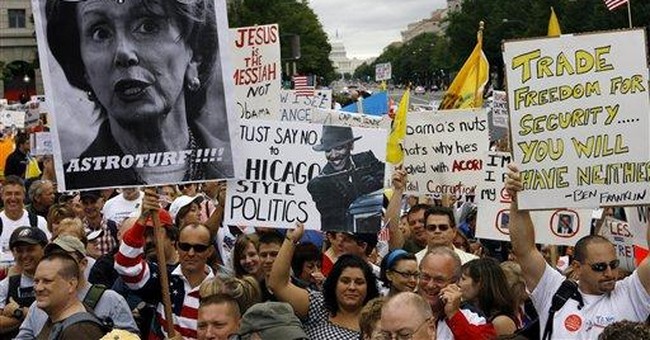 “La la la.  I can’t hear you.”  That’s what la-la liberals spent the entire weekend saying when confronted with the reality of the September 12 march on Washington.  Confronted with an oncoming tsunami, many on the left spent the weekend quibbling over how many drops of water it contained.   Others ignored it completely.

: normal">While liberal bloggers were claiming there were mere thousands of conservative marchers in DC, rather than a million, they refused to address the political ramifications of the protests.  They used the equivalent of my child’s favorite method of tuning me out when I am telling her grandmother a story of the latest embarrassing, adorable thing she’s done – putting her fingers in her ears and repeating “la, la, la, I can’t hear you.”

The phrase “conservatives taking to the streets” is one that I have not yet gotten used to hearing quite yet.  But as foreign as it still sometimes seems to me, it must be 100 times more difficult for liberals to grasp the concept.  I get it.  I understand that they must be in shock.

I understand that they are desperate for any way to change the subject.  But to look at pictures of throngs of people stretching on for blocks and blocks and blocks and block and to try to pretend there were only a few thousand there is delusional.   Many of those on the left may have convinced themselves that their eyes really didn’t see what was there, but I suspect they know exactly what is happening.  They are just not yet at a place where they can face the reality of it.

It is not just hundreds of thousands of protesters marching with anti-Obama, anti-big government signs that Democrats are seeing.  They are also seeing very real poll numbers that match the mood of the tea party protesters.  Over the weekend the Associated Press reported, “Despite sweeping Democratic successes in the past two national elections, continuing job losses and President Barack Obama's slipping support could lead to double-digit losses for the party in next year's congressional races and may even threaten their House control.”

The AP report continued, “…it could be the most toxic environment for Democrats since 1994, when the party lost 34 House incumbents and 54 seats altogether. Democrats currently have a 256-178 edge in the House, with one vacancy. Republicans would have to pick up 40 seats to regain control.”

I don’t blame liberals for wanting to ignore and deny the truth in front of their faces.  It must be a horrible shock for them, after such incredible successes in 2006 and 2008, but they do so at their own peril.

More threatening than the raw number of those who have showed up at tea party protests and town hall meetings over the past eight months, is the makeup of the protesters.  As Mark Hemingway at National Review Online noted, “…overall it was an undeniably sober and informed crowd, especially in comparison to your standard left-liberal protest march. These people have jobs, are influential in their communities and you can be darn sure they plan on voting next November.”

Those on the left who have not completely buried their heads in the sand have to know that for every one of these people who took time out of their lives and spent considerable money to travel to Washington, DC to protest, there are many, many more at home standing along with them.   There are others, like me, who could not make the trip due to other obligations.  (I was home with a child sick with pneumonia.)  But those of us who didn’t have the financial means or the available time to make a trip to the nation’s capital, will have no trouble finding time to vote next year.

My friend, blogger Terresa Monroe Hamilton, wrote of those politicians not yet hearing the message of those protesting over the past eight months, “You are so out of touch with the American people, it is staggering. You see millions march on DC, millions more gather across the nation, and yet millions more converge in their homes screaming at you to stop it and yet you march on trying with all your evil might to bring down our nation and our patriots. Not to be indelicate, but screw you… Americans are not backing down and you should fear for your jobs…”

Conservatives are asking, “Can you hear us now?”   Many of those on the left, as well as politicians of both parties, are not yet ready to answer “yes” out loud and in public, but rest assured they are hearing us.  Those who haven’t heard yet are not worth worrying about anyway.  They are living in a la la land, an alternate reality, but it won’t be long before they will face the reality of the real world.  The only question is whether or not it will be before or after Election Day 2010.

Joe Biden Reportedly Having Trouble Keeping Up with Everyone Else at G-7 Summit
Townhall
Austin newspaper not publishing 'vague description' of shooting suspect because it 'could be harmful in perpetuating stereotypes'
Twitchy
EXCLUSIVE: Defector Provides Evidence That the Chinese Military Orchestrated the Creation of COVID-19 and Lab Leak
Redstate
Dementia Joe Forgets Where He Is Again
PJ Media