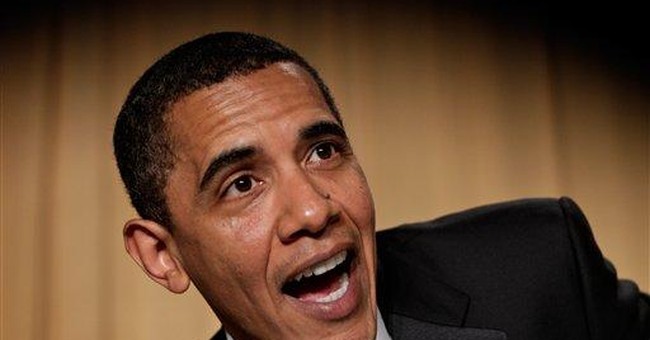 On more than one occasion news has been made by comedians at the annual White House Correspondents’ Dinner.  In past years, Don Imus and Stephen Colbert drew attention for the mean-spirited nature of some of their jokes.  This year’s most controversial moment came from Wanda Sykes’ comment that Rush Limbaugh was the 20th September 11 hijacker and her hope that his kidneys would fail.

I watched some of the White House Correspondents'  Dinner on C-Span this weekend, but what I found most interesting was something that was broadcast by C-Span to fill the time when the guests were eating.     The event was a panel discussion, sponsored by the Writers’ Guild of America, East, which had taken place at the Newseum.  The panel consisted of late night comedy writers and the subject they addressed was the relationship between news and comedy.

“So what does comedy tell us about the truth that the news can't? That's the question we're taking a stab at answering," said WGAE President Michael Winship.

During the panel discussion Bill Scheft, a writer for the David Letterman show for 18 years, talked about a segment on the show that I remembered well.   Newsbusters blog posted a transcript of Scheft’s comments:

“The moment that I am most proud of having been on the show is when we had John McCain on after, you know, he, you know, bolted on us to go save the economy. When he came back to the show, and he was, at the time he was out on the campaign trail beating the Bill Ayers drone. And I gave Dave a note before we went on about McCain's relationship to Gordon Liddy. And, in the middle of the interview, McCain starts talking about Obama palling around with terrorists and Bill Ayers.”

Scheft continued, “And I stand under the spiral staircase on stage and I was just standing there going: ‘Liddy, Liddy, say Liddy, please say Liddy, please say Liddy.’ And Dave said, ‘Well don't you have a relationship with G. Gordon Liddy?’ And you just saw, you know, whatever chip was left in McCain's head just kind of, phhh, and ‘well I, you know, I know him.’ ‘Well, didn't you go to a fundraiser, didn't you attend a fundraiser at his house?’ ‘Well I.’ ‘We'll be right back.’ Which is the great thing that a host can do, you know, ‘we'll be right back.’...I'm more proud of that than any single joke that I've written.”

That episode of the Letterman show was highly anticipated because McCain’s last minute cancellation of his earlier appearance on the show had resulted in an angry tirade from Letterman.  Viewers wanted to see if McCain and his good buddy David Letterman would kiss and make up.

When I heard Scheft’s statement I was surprised because I remembered the “Ayers-Libby” exchange well and  thought it was the dumbest  comparison I had ever heard.  Watching that segment of the Letterman show I wondered why McCain didn't come straight back at him and explain to Letterman that Ayers was a domestic terrorist.  Ayers advocated bombing public buildings.   Liddy organized a failed break in of the Democratic National Committee and spent over four years in prison paying for it.   I was surprised to learn that what I thought was a ridiculous and uninformed comparison was something David Letterman’s writer of 18 years was more proud of than any single joke he had ever written.

He didn’t say why that made him more proud than any joke he had written, but he believed the Liddy line destroyed McCain.  Based on other comments made during the panel, his political leanings were no secret.

Questions were taken from the audience of over 300 “political leaders and opinion makers.” One audience member quoted a comment from Jon Stewart about not making jokes about Barack Obama because he’s just not funny.  She said “Well, he is pretty funny,”   then asked if the panelists didn’t make more jokes about him because he's black or “is it because he is a Democrat and we're all so in love with the fact there's a Democrat in the office?”

Scheft responded to her question, “Well, I think the reason why it's not cause  he's black, and it's not because we're afraid, it's because so far he's just a little too damn competent and we ain't used to that.”

Fellow Letterman writer Tom Ruprecht, who talked earlier about Bush’s “babbling” and about how Republicans lie,  jumped in and assured the audience that "We're lookin.”   Scheft continued, "Yeah, we'd love to see him slip on an oriental rug, believe me, we'd like to see him do something like that. Or just, would it kill him to mispronounce a world leader?  Would it kill him?"

Would it kill Scheft to recognize the “damn competent” Obama’s many gaffes including his reference to “Cinco de Cuatro” or to the Austrian language or his misreading of the words on his teleprompter ?   I think maybe it would.

At one point in the panel discussion, J.R. Havlan, a writer for The Daily  Show, talked about how important comedy writers are to the political process.  He said they help people “learn how to watch and decipher the news.”

Opus Moreschi, a writer for The Colbert Report, said they are meticulous about research because they want the basis of their jokes to be factually true.  He said they sometimes talk to experts in certain fields in an effort to be as well informed as possible because the truer it is, the funnier it is going to be.  He said, “You know I don't want people to get their information from us, but there is an understanding that there is some truth in it. “

When coverage of the White House Correspondents’ Dinner resumed, viewers could see Wanda Sykes aiming her most vicious comments at conservatives like Rush Limbaugh, Sean Hannity and Dick Cheney.   Ben Shapiro noted that instead of being tough on President Obama she chose to “gently stroke his ego with jokes about his pecs, his dog, and his basketball skills.”

From the late night comedy writers’ panel, I learned that not only are late night joke writers as anti-Republican as I always suspected, but they are completely aware of how much influence their work has on public opinion and they consider the political implications.  If they pay as much attention to research as they claim, they are aware of all the ways they could destroy Democrats and President Obama.   They just don’t choose to do it.  There is no huge shock there, but it was a little surprising finding it on open display for all to see.