McCain Goes on Offensive on the Issue of Economy 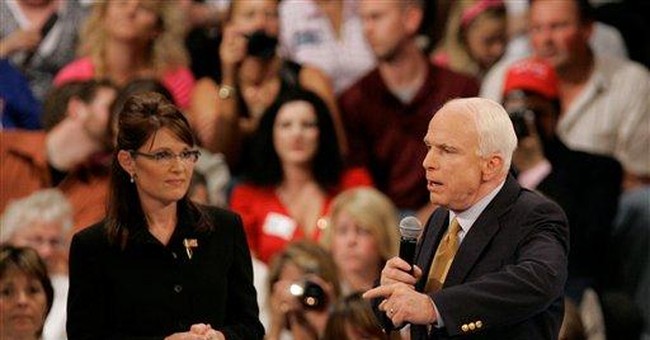 When it comes to grappling with the details of complex financial matters, I suspect I am like more than a few other voters. My eyes glaze over and my brain disengages. So when considering the current financial crisis, my first instinct was to assume it might be too complicated for me to understand. Or at least too complicated for me to care to understand. After all, Senate Majority Leader Harry Reid said "no one knows what to do" about it.

Reid was not the only one unsure of what to do. Barack Obama "would not say if he supported or opposed" the AIG bailout, and in fact didn't seem too sure of who AIG even was. Neil Cavuto interviewed NewYork congressman Gregory Meeks, who is a member of the House Financial Services Committee. It was evident Meeks didn't know how things had failed so miserably (scary considering his position), and when Meeks was asked why Bush deserved sole blame and not the Democrats who have controlled Congress the past two years, he just said we should have found ways to work together and that we need a new president who would work with the Congress. He never did say what the President needed to do about it. Vice Presidential candidate Joe Biden threw his two cents into the discussion by declaring it is "patriotic" to pay taxes. I don't know what that says about Rep. Charlie Rangel, but I do prefer that definition to the one that says it is patriotic to bash America.

In a more perfect world those in the media would educate their audience by providing accurate information, but since they are still, after about three decades, confused about something as simple as what is and is not a government budget cut, I decided not to look there for answers. Here's a quick lesson to those in the media -- if a politician approves something less than the full amount of a requested increase, but the final amount of money going to that budget item ends up being more than it was the year before, that is an increase, not a cut. Here is a nice little scenario most people can understand. If you make $50,000 a year and you ask for a $10,000 a year raise, but you only get a $5,000 raise, you ended up with a 10% increase, not a cut in pay. What many of the newspapers across the country have been doing to reporters' salaries over the past few years -- now those are cuts.

The Democrats appear to be following a similar path to the one Bill Clinton took in 1992 when the election was about "the economy, stupid." Remember what Bill Clinton did that year? He looked at an economy that was in recovery, steadily improving the last six months of the campaign, and declared it the "worst economy in fifty years." I was twenty-six years old at the time, and even at that young age remembered the Jimmy Carter years. I kept waiting for someone in the media to ask Clinton if he was seriously saying George H.W. Bush's economy was worse than that of Jimmy Carter who had to have a misery index created just to measure how horrible it was. I don't remember anyone ever asking him that and I am not expecting any better this time around.

Since Democrats are just telling voters that Republicans are to blame, but won't say exactly how, and those in the media are just repeating what the Democrats tell them, this is a perfect opportunity for the McCain campaign to do some voter education on the economy. Unless John McCain mounts a strong offense and gives voters the full story about how we got here, the public will be convinced the "mess" is the fault of George Bush and the Republicans and the only way to "fix" it is to elect Barack Obama and more Democrats.

On Thursday it appears John McCain decided to come out swinging. In spite of the insistence by Democrats that Republicans are all to blame, McCain has some powerful ammunition and he used it. Bush has been pushing for stricter regulation of Fannie Mae and Freddie Mac since as far back as 2003, but Congressional Democrats blocked those efforts. In 2005, McCain joined three other Senate Republicans as a sponsor of regulatory reform legislation. He reminded voters of that, and of what Obama was doing at that same time.

"Senator Obama talks a tough game on the financial markets but the facts tell a different story. He took more money from Fannie and Freddie than any Senator, but the Democratic chairman of the committee that regulates them. He put Fannie Mae's CEO who helped create this disaster in charge of finding his Vice President. Fannie's former General Counsel is a senior advisor to his campaign. Whose side do you think he is on? When I pushed legislation to reform Fannie Mae and Freddie Mac, Senator Obama was silent. He didn't lift a hand to avert this crisis. While the leaders of Fannie and Freddie were lining the pockets of his campaign, they were sowing the seeds of the financial crisis we see today and enriching themselves with millions of dollars in payments. That's not change, that's what's broken in Washington."

McCain did not let Joe Biden's tax comment go by unanswered either, "While Senator Obama and Congressional leaders don't know what to think about the current crisis, we know what their plans are for the economy. Today Senator Obama's running mate said that raising taxes is patriotic. Raising taxes in a tough economy isn't patriotic. It's not a badge of honor. It's just dumb policy. The billions in tax increases that Senator Obama is proposing would kill even more jobs during tough economic times. I'm not going to let that happen."

When I read those comments from John McCain I wanted to stand up and cheer. Republicans lose when they allow Democrats and the media to mischaracterize their words and actions. Earlier in the week I was convinced Democrats would get away with just that regarding the current financial crisis. Over the course of this campaign, Democrats have gained ground when the economy is the focus. After hearing John McCain's speech on Thursday, I don't believe that is going to happen. It is not always the case, but this time the facts are definitely on McCain's side. It will be far from easy, but if he repeats this message over and over again, Republicans might be able to do with the issue of the economy the same thing they were able to do with "change" during their convention. If Republicans can make significant progress on that issue with the voters, this election will be all but over.