Lindsey Stroud
|
Posted: Jul 09, 2021 12:01 AM
Share   Tweet
The opinions expressed by columnists are their own and do not necessarily represent the views of Townhall.com. 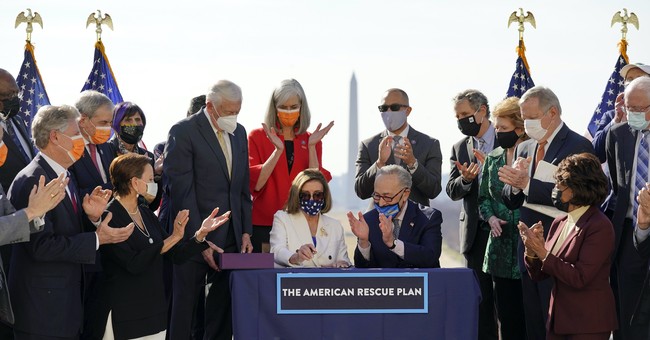 The summer provides for many reruns on television. The same can be said as the country lurches toward an epic showdown as Republicans and Democrats argue about the debt ceiling and how the federal government spends more money than it brings in. Like debt ceiling discussions in the past, left-leaning politicians and bureaucrats are urging lawmakers to raise the amount of money the U.S. government can borrow, while some on the right are demanding reductions in federal expenditures.

It is clear that something will have to be done. As of July 8, 2021, the total U.S. national debt is more than$28.4 trillion. In May, President Joe Biden unveiled a $6 trillion budget proposal which wouldincrease public debt“to a higher level than during World War II.”

Now, federal lawmakers must tackle a bigger issue of raising the debt ceiling or face lower credit rankings or even defaulting loans. The debt ceiling is a figure that is set by Congress and determines the amount of money the U.S. Treasury can borrow on behalf of the federal government. July 31, 2021 is the deadline for federal government to pay off some of its debts which will have to mean an increase in the debt ceiling. In June, U.S.Treasury Secretary Janet Yellen“urged Congress” to extend the deadline, warning against defaulting on federal debt obligations.

The country has been here before. In 2011, after taking back Congress, Tea Party Republicans waged an epic showdown with then-President Obama by refusing to increase the debt ceiling without reforms and spending cuts. The showdown would lead to a temporary fix, with Republicans agreeing to raising the ceiling in exchange for future spending cuts. This would be followed by the 2013 debt ceiling crisis. The 2013 debacle lasted from January to October. On October 1, 2013, the federal government actually shut down.

This summer’s looming deadline may be even more dramatic than the 2013 fiasco if conservatives go back to their roots and try to start to rein in federal spending. In April 2021, Sen. Rick Scott (R-Florida)addressed the spending habitsof the federal government. by noting that Republicans “agree that we have too much debt and that we have to figure out how to live within our means.” Scott is pushing for “dollar-for-dollar spending cuts as part of a debt ceiling increase.”

Either way, younger Americans will bear the brunt of Washington’s out of control spending. One journalist noted that thefederal debtis “essentially a tax hike for Millennials and Gen Z.” Worse, many young Americansare unfazedby the federal deficit, and even more problematic, many support more government spending. For example, according tosurveys done by the Pew Research Center, 70 percent of Gen Z and 64 percent of Millennials think “government should do more to solve problems,” compared to just 49 percent of Boomers.

Ultimately, the debt ceiling debate is a prime example of the failures of the federal government and how politicians and bureaucrats think that misguided and expensive government policies can always be fixed by the taxpayers. It doesn’t seem to matter to policy makers if $5 trillion is wasted on a program that fails three years after it was implemented. Afterall, the federal government can always just raise the limit on how much it can spend and bill taxpayers later.