Lindsey Stroud
|
Posted: Sep 07, 2019 12:01 AM
Share   Tweet
The opinions expressed by columnists are their own and do not necessarily represent the views of Townhall.com. 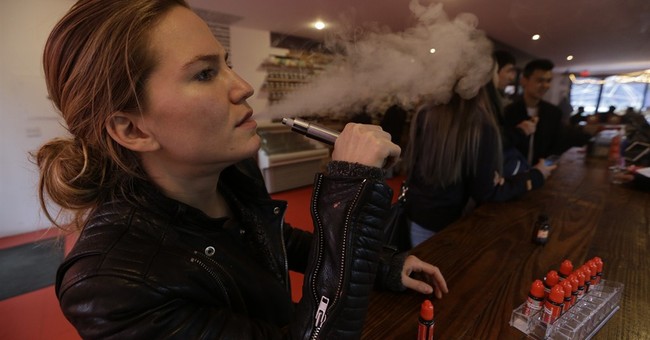 More and more young Americans are being hospitalized for side effects from so-called “vaping.” Or so the federal government wants you to think.

Despite Wisconsin’s Department of Health Services (WDHS) and the Centers for Disease Control and Prevention (CDC) linking most of these hospitalizations to tetrahydrocannabinol (THC – a chemical found in marijuana) products, the news media is, nevertheless, erroneously linking these recent hospitalizations to regulated e-cigarette and vaping devices.

The first reports of such hospitalizations linked them to black market THC products. But public health agencies in California conveniently buried that story, and in late August, the CDC coincidentally announced a new grant for tobacco control programs.

The California Department of Public Health (CDPH) issued a “Health Alert” at the end of the summer on “Severe Acute Pulmonary Disease Associated with Cannabis or Cannabidiol Oil Vaping” in Kings County, California. In its notice, CDPH noted that all the diseased patients had “been vaping cannabis or cannabidiol (CBD) oils.”

Furthermore, a “Joint Health Advisory” issued in August by Alameda County and the City of Berkeley reiterated similar findings, noting pulmonary illnesses were “associated with cannabis or cannabidiol oil vaping.”

CDPH issued another “Health Alert” in late August stating that a majority of the “patients report vaping the cannabis compounds THC and/or CBD, and some patients also report vaping nicotine products, although the exact cause of illness is not yet known.”

Basically, public health is now suggesting that e-cigarette products that have been on the market since 2016 are suddenly causing hospitalizations—even though those same hospitalizations were first linked to THC vaping products.

In the midst of these state-issued health alerts, the CDC announced a new grant to help states and localities combat tobacco. CDC-RFA-DP20-2001 hopes to award $540 million to recipients with the “capacity to implement statewide evidence-based policy, systems, and environmental strategies and activities to reduce tobacco use and dependence, secondhand smoke (SHS) exposure, tobacco-related disparities and associated disease, disability, and death.” One goal is that award recipients will be able to “prevent initiation of tobacco use (including emerging products including e-cigarettes) among youth and young adults.”

In other words, despite the fact recent so-called “vaping-related hospitalizations” have actually been linked to black market THC products, the CDC is giving state health departments an incentive to further scrutinize e-cigarettes and vaping products.

Regulated e-cigarette products are not causing hospitalizations. In fact, they have helped an estimated three million Americans quit smoking, have emerged as a tobacco cessation product that is twice as effective as traditional nicotine replacement therapy, and could, in fact, save states money by reducing health care costs.

Recent headlines purporting that vaping devices available at retail outlets are causing hospitalizations are false and misleading. Moreover, there is far too much money involved in tobacco control, and states are all too eager to get their hands on it.