Lindsey Stroud
|
Posted: Oct 31, 2018 12:01 AM
Share   Tweet
The opinions expressed by columnists are their own and do not necessarily represent the views of Townhall.com. 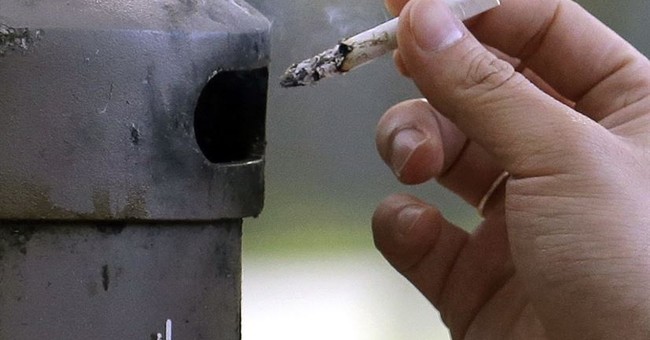 This year, voters in two states—Montana and South Dakota—will determine whether additional revenue should be collected from cigarette sales to fund programs other than cessation.

This revenue would be generated from tobacco taxes, which are often marketed as “feel-good” measures, but are actually highly regressive and disproportionately impact lower-income people. In 2018, the Pew Charitable Trust revealed that approximately one in four adults living below the poverty line smokes. Furthermore, uninsured Americans and Medicaid recipients “smoke at rates more than double those for adults with private health insurance or Medicare,” according to the Centers for Disease Control and Prevention (CDC).

However, it is not likely that the two upcoming tobacco tax ballot initiatives will be approved. Only one 2016 tobacco tax ballot initiative was successful: California’s Proposition 56, which guarantees only 13 percent of tobacco tax revenues are “used for the purpose of funding comprehensive tobacco prevention and control programs.” The other 87 percent will go toward a plethora of non-tobacco-related programs and institutions, such as the University of California, which will receive five percent of revenues generated by Prop. 56

This year, Montana is considering a cigarette tax hike that would eliminate the state’s 2019 sunset date for its Medicaid expansion. The tax bill would impose a “$2.00 increase per pack of cigarettes,” increase the tax rate on snuff and other tobacco products, and implement a new tax on e-cigarette and vaping devices. This tax hike could exacerbate one of Montana’s pressing problems: cigarette smuggling. In 2015, the Treasure State ranked 11th in the nation for cigarette smuggling, much higher than neighboring states, including Idaho, North Dakota, and Wyoming, which ranked 46th, 38th, and 42nd, respectively, according to the Tax Foundation.

Most problematic is the backward nature of the proposal funding Medicaid while taxing e-cigarettes, which can alleviate Medicaid spending. The R Street Institute found that Medicaid savings “will be approximately $2.8 billion per 1 percent of enrollees” over the next 25 years if one percent of Medicaid recipients switched from smoking to e-cigarettes. A larger analysis by State Budget Solutions determined that if all Medicaid recipients would have switched to e-cigarettes from traditional cigarettes, Medicaid savings could have amounted to $48 billion by 2012.

Although Montana’s proposed tobacco tax hike devotes little revenue to prevention and cessation efforts, South Dakota’s proposed tobacco tax does nothing of the sort. In fact, South Dakota’s ballot initiative deposits the additional tax revenues into “the postsecondary technical institute tuition reduction workforce training fund.” Even worse, any surplus revenue will be placed into the state’s general fund. Under Mount Rushmore State law, the first $30 million collected by tobacco taxes must be deposited into the state’s general fund. The next $5 million is deposited into the Tobacco Prevention and Reduction Trust Fund.

If South Dakota wants to reduce college costs gone wild, as addressed by the ballot measure’s author, it should reform higher education policies—not punish cigarette smokers. One such reform would be amending a 2015 law that allows the Mount Rushmore State to revoke driver’s licenses due to unpaid tuition bills. The New York Times found that by October 2017, South Dakota had blocked licenses from “1,550 people with educational debt.” Because the Mount Rushmore State has little public transportation, this is especially burdensome to South Dakotans struggling with student loans.

This disregard for tobacco prevention in South Dakota is even more blatant with respect to the Master Settlement Agreement. In 2017, the state received $24.2 million in tobacco settlement payments, but only spent $4.5 million on “state tobacco prevention.”

In November, voters should remember that cigarette taxes are unreliable fiscal policies, especially when used to fund new programs. Inflicting taxes on products with diminishing demand create short-term fiscal increases, but eventually cause long-term revenue shortfalls. For instance, The Pew Charitable Trusts revealed a decline in cigarette consumption has caused cigarette tax revenue “to drop by an average of about 1 percent across all states from 2008 to 2016.”

In short, states should refrain from relying on unreliable cigarette revenue for non-tobacco-related funding. Additionally, no state should impose taxes on e-cigarettes and vaping devices. The decision to use cigarette taxes to support unsustainable state budgets is a short-sighted solution that will create even greater problems down the road. Hopefully Montana and South Dakota voters will see through this shady political ploy and vote against the proposed tobacco taxes.