Linda Chavez
|
Posted: Mar 01, 2019 12:01 AM
Share   Tweet
The opinions expressed by columnists are their own and do not necessarily represent the views of Townhall.com. 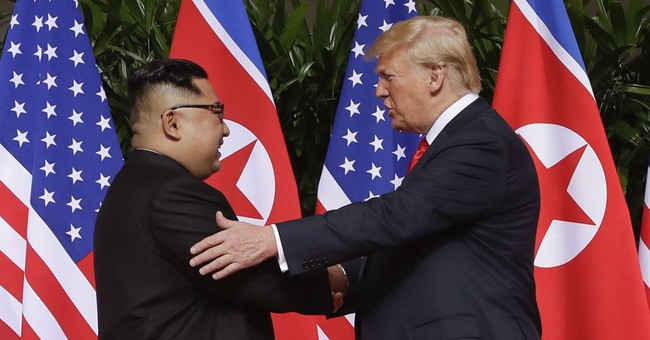 This week was the most important in the Trump presidency -- and not simply because the president's former lawyer presented documentary evidence to Congress that the president knowingly conspired after becoming president to conceal his payments of hush money to a porn actress with whom he'd had an affair. Most eyes were focused on Capitol Hill this week as Michael Cohen testified before the House Committee on Oversight and Reform, and the show was a good one. Cohen laid out evidence that Donald Trump may have defrauded banks, insurance companies and tax authorities by inflating or deflating (for tax purposes) the value of his properties over a course of years with phony financial statements, which, if true, would be felonies under federal and state laws. He also produced checks signed by the president, the president's eldest son and the chief financial officer of his business to reimburse Cohen for a $131,000 payment to Stormy Daniels to buy her silence on the eve of the election. Cohen is going to prison in a couple of months, in part for having violated campaign finance law when he made that payment to Daniels. But while the hearing was going on, a dangerous scenario was unfolding in Vietnam as the president met with Kim Jong Un in Hanoi to negotiate North Korea's nuclear disarmament. And the wrong outcome of those talks would have had far greater impact for the world than what went on in the Rayburn Building.

Trump did something many people, including me, feared he was incapable of doing. He walked away from making a bad deal that would have diverted attention from his troubles. Kim wanted relief from the crippling sanctions that have been in place for decades, but he was not willing to take the necessary steps toward dismantling his nuclear program in an orderly process; sanctions would have been lifted and aid given only as progress could be verified step by step. The director of national intelligence, Dan Coats, recently told Congress that our intelligence shows that North Korea is continuing to add to its nuclear arsenal and delivery systems, even as the president has claimed North Korea is no longer a nuclear threat. Trump was so angry at the public disagreement that he reportedly wanted to remove Coats from his job. But something happened in Hanoi. Trump listened to Secretary of State Mike Pompeo and other advisers and did not give in to his ego. "Sometimes you have to walk," Trump said at his news conference after negotiations fell apart.

There is plenty of reason to criticize Trump for participating in two summits that elevated the murderous dictator of North Korea in the first place without working out agreements beforehand. But with this amateur president, you take what you can get. Perhaps the worst moment in Hanoi came when a reporter asked the president about Otto Warmbier, the American student who was imprisoned in North Korea and suffered brain hemorrhaging, which resulted in his death. The president claimed to have brought up Warmbier's treatment to Kim. "He tells me that he didn't know about it, and I will take him at his word," Trump said. "Those prisons are rough. They're rough places, and bad things happened. But I really don't believe that he was -- I don't believe he knew about it." But of course, "those prisons" are set up to torture, starve and work people to death. They are at the heart of the North Korean totalitarian system and keep the man Trump claims to have "fallen in love" with in power. Warmbier's death was tragic and an affront to the United States. But tens of thousands of North Koreans have perished in the camps, and Kim has directly ordered the executions and imprisonment of more than 400 officials and their families in political purges since he assumed power in 2011, according to a report by the North Korea Strategy Center in Seoul.

Whether or not Trump has learned any long-term lesson from his failure to secure a deal with Kim Jong Un, however, we can be thankful he did the right thing this week.

Linda Chavez is chair of the Center for Equal Opportunity and a senior fellow at the Niskanen Center.