Linda Chavez
|
Posted: May 13, 2016 12:01 AM
Share   Tweet
The opinions expressed by columnists are their own and do not necessarily represent the views of Townhall.com. 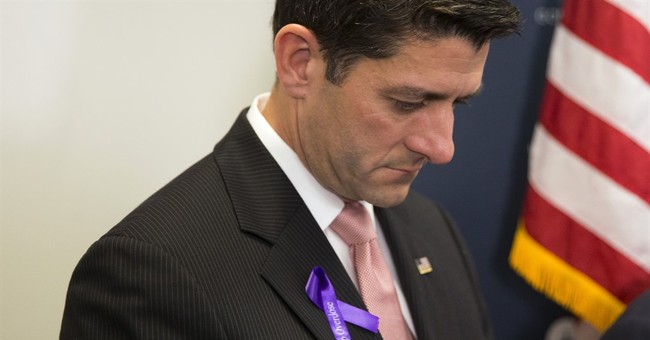 Trending
Paul Ryan's decision not to quickly endorse presumptive GOP presidential nominee Donald Trump will inevitably leave a substantial number of Republicans unhappy. He may yet do so, but the person to blame for Ryan's reluctance is Trump.

This week alone the Trump camp has made two disastrous decisions that imperil the GOP. First, Trump surrogate Sarah Palin threatened she'd work to unseat Ryan in his home district, where Ryan faces a primary challenge. Talk about loose cannons and collateral damage. Then Trump announced that he is not going to release his tax returns anytime soon, despite previous pledges to do so.

The latter decision should be a warning to everyone that Trump has something to hide. Mitt Romney mused, "There is only one logical explanation for Mr. Trump's refusal to release his returns: There is a bombshell in them. Given Mr. Trump's equanimity with other flaws in his history, we can only assume it's a bombshell of unusual size."

Trump's entire success in this campaign has been to claim he is a self-made billionaire whose business acumen will "Make America Great Again," a phrase he's gone to the trouble to trademark. But his tax returns are probably the nearest we will ever come to knowing how successful he has actually been. Many analysts who've looked into his finances claim he's far less rich than he lets on.

Trump claims he's worth over $10 billion (that's more than a billion higher than he claimed earlier in the campaign), but many experts who have looked at his financial disclosures assume it is far less, some even claiming he may only be worth a billion or two -- not exactly chump change but not the huge fortune Trump brags about.

If Trump is worth what he says, most Americans would assume he pays hefty taxes and his rates exceed those of the throngs who attend his rallies. But that may be the problem Trump is hiding. The folks waiting in line to see their hero might not appreciate it if they find out he pays little or no taxes while he flies around in a private 757-200 and lives in gilded Trump Towers and Mar-a-Lago.

No law requires Trump to release his taxes, but every candidate in recent memory has done so -- and the sooner the better. Frankly, it's amazing that he has not been forced by public opinion and media hounding to do so before virtually locking up the nomination. No doubt he thinks he can stonewall through the election. But that is a very dangerous path for the American public.

What happens if Trump actually gets elected? The vast wealth he claims could present enormous conflicts of interest. Will he put all his holdings in a truly blind trust and turn over complete control of his companies to disinterested parties? He's suggested that his children will run his businesses, as they are doing during the campaign, but that is hardly an ethical decision if he becomes president. How could we ever know that Ivanka or Donald Jr. or Eric weren't taking directions from Dad? Eric recently claimed on "The Kelly File" on Fox News that he and his siblings were his father's most trusted advisers. Would they be kept out of the Oval Office in order to ensure no conflicts arise?

Appointees to high-level offices are vetted far more thoroughly than the presidential candidates. Most turn over extensive financial filings, which are examined by forensic accountants for discrepancies and to insure that they have paid all taxes -- federal, state and local, as well as withholding taxes on employees. The FBI does a thorough search through the nominee's background, going back to childhood; even the nominee's family undergoes scrutiny. On penalty of perjury, nominees must swear that everything they tell investigators is true. Former Department of Housing and Urban Development Secretary Henry Cisneros pleaded guilty to lying to FBI officials about payments he'd made to a woman with whom he was having an affair and had to resign his post, as well as pay a fine.

Imagine what such an investigation would turn up on Trump, whose many scandals have been tabloid fodder for decades.

Speaker Ryan is right to say he has to get to know Trump better before jumping on his bandwagon. Would that the voters got to know more about him as well -- but nothing so far in this crazy campaign has suggested it matters to his most ardent supporters.