Linda Chavez
|
Posted: Mar 18, 2016 12:01 AM
Share   Tweet
The opinions expressed by columnists are their own and do not necessarily represent the views of Townhall.com. 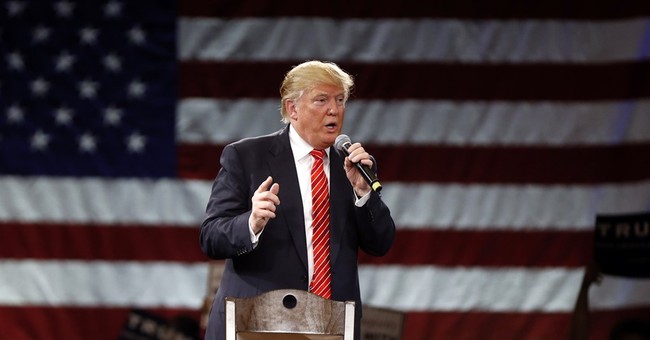 Trending
Donald Trump has predicted there will be riots in the streets if he is not crowned victor at the Republican National Convention in Cleveland this summer. Given his exhortations to his supporters to "knock the crap out of" anyone disrupting his rallies and his promise to "pay for the legal fees," I'll take him at his word. Trump's comments are what sociologist Robert K. Merton called a self-fulfilling prophecy: "a false definition of the situation evoking a new behavior which makes the originally false conception come true." Trump likes to play the tough guy, and his rallies have become a gathering place for those attracted to his strongman image, including some who think you silence dissent with a sucker punch.

I have had my share of dealing with protesters, including some who threatened or engaged in violence. In 1991, I was punched by a male protester as I was leaving Hostos Community College in the Bronx. I think he was aiming at my jaw, but it landed on my shoulder, leaving a visible bruise. I had been scheduled to give a speech on my new book, "Out of the Barrio: Toward a New Politics of Hispanic Assimilation." But when I arrived at the venue, the school's administrator told me that he couldn't guarantee my safety or that of the students because a group of radical Puerto Rican demonstrators were armed "with eggs and who knows what else" if I "insisted" on taking the stage.

I considered my options. I'd never backed out of giving a speech before, even when faced with threats on my life. I regret that I caved in to the administrator's wishes -- which denied the students the opportunity to judge for themselves whether I was the racist, anti-Hispanic Hispanic that radical professors and protesters claimed I was. But at least I was the only one who got hurt.

Every other time I've faced protests, even threatening ones, I've held my ground. I reckon I've done this some two dozen times over the many years I've been in public life. The same year as the Bronx fiasco, I was invited to give the commencement speech at the University of Northern Colorado and then disinvited when Hispanic students occupied the college president's office. I gave the speech I had intended at my alma mater, the University of Colorado in Boulder, instead; but there, too, I was met with hecklers, and the university turned over the campus quadrangle to protesters, who launched an anti-Linda Chavez "speak-in."

At the University of Illinois, protesters armed with coconuts (brown on the outside, white on the inside, get it?) stood at the back of the auditorium menacingly and then smashed them on the stage after I spoke. I've had to hire off-duty police to accompany me on some campuses and register in hotels under false names, as well. But never once have I called on my supporters to silence the protesters, much less to mete out their own violence in response to threats against me.

Donald Trump, on the other hand, seems to believe that the way you deal with dissent is to crush it -- not with more compelling ideas or more reasoned speech, not with dignity in the face of foul threats but with punches that will see the protesters "carried out on a stretcher" as they were in the "old days." His models are Bull Connor, Deng Xiaoping, even Kim Jong Un, the latter two of whom he praised as strong leaders adept at dealing with problems.

We are facing dangerous times ahead, certainly the worst presidential election since 1968. Radicals on the right and left could well turn this summer into a bloody one. In 1968, the riots basically handed the election to Richard Nixon. It is impossible to know what will happen this year. But one thing is sure: If Donald Trump keeps predicting violence, he's likely to get it -- and the results for our country will be ugly.