Linda Chavez
|
Posted: Feb 05, 2016 12:01 AM
Share   Tweet
The opinions expressed by columnists are their own and do not necessarily represent the views of Townhall.com. 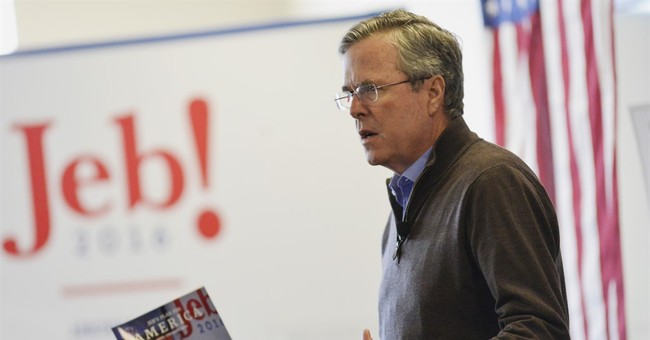 Trending
New Hampshire may well be the end of the campaign trail for more GOP hopefuls, as Iowa was for Rand Paul, Rick Santorum and Mike Huckabee. All three ran largely positive campaigns and comported themselves with dignity and grace when they bowed out. Unfortunately, the same can't be said for some of those hanging on by a thread in New Hampshire. Chris Christie and Jeb Bush, in particular, have decided their best chance to stay in the race is to attack other candidates.

Chris Christie seems to be reverting to form as a guy with a mean streak, something he has mostly avoided in the debates. He is at his best when he channels his anger toward terrorists and worst when he demeans his fellow Republicans. His comments this week about Marco Rubio make Christie, not Rubio, look bad. Calling Rubio the "boy in the bubble" made me think of the Bubble Boy episode of "Seinfeld." But the bully on the TV show, who shouted and name-called from inside his bubble, seemed a lot more like Chris Christie than Marco Rubio. Christie has been a decent Republican governor in a Democrat state, but his ego gets the best of him every time he doesn't get what he wants.

Jeb Bush, however, is the true disappointment to me in this election. First let me say I think Bush would make a very good president. He's a lot more conservative than either his father or older brother -- and he governed as such for eight years in Florida. He showed real courage in office: He eliminated race-based college admission in the state; he took on the education unions and created a real model for change by enacting the first voucher program for kids attending failing schools (though it was later shut down by the courts); and he cut taxes.

But despite his stellar record and his success in raising more money than any other Republican, Bush has failed to connect with the electorate, and his performance in the debates hasn't helped. Now Bush is following advice to go negative, which doesn't suit him well.

Bush won't win New Hampshire and he may not even place. He's running fifth in the last three state polls. He's still got the money to stay in the race for a while, but it's hard to envision a scenario in which he can become the nominee. So the question becomes for him, how does he want to end his political career? He's not a sitting governor, as Christie and Kasich are, nor a senator, like Ted Cruz or Marco Rubio (who is retiring), which means he has no chance to redeem his political reputation when he fails to win the nomination.

As someone who admires Jeb Bush -- and who has tremendous personal affection for his whole family, who are among the most decent people I've ever met in politics -- I hope that he will listen to his conscience and not those who counsel attacks on other Republicans. I understand Bush was hurt when Marco Rubio decided to throw his hat in the ring rather than rally to his side. But reports in The New York Times this week that Bush is teaming up with Christie to try to knock Rubio out in New Hampshire make Bush seem like a sore loser, not the honorable man he's always been.

And it's not only Rubio that Bush is going after through his super PACs. (Yes, yes. I know Bush and the super PACs can't coordinate. But it's a distinction without a difference.) Bush went after John Kasich, too, when the Ohio governor looked like he was gaining traction in New Hampshire. And he's even tried to take on Trump (though I'm not sure that qualifies as a violation of President Reagan's Eleventh Commandment: "Thou shalt not speak ill of another Republican").

If Bush, Christie or Kasich fare poorly in New Hampshire, I hope they will do the right thing. The same goes for Ben Carson and Carly Fiorina. Hanging on hoping you can take another candidate down a notch certainly does the party no good.