The Party's Over for Steele 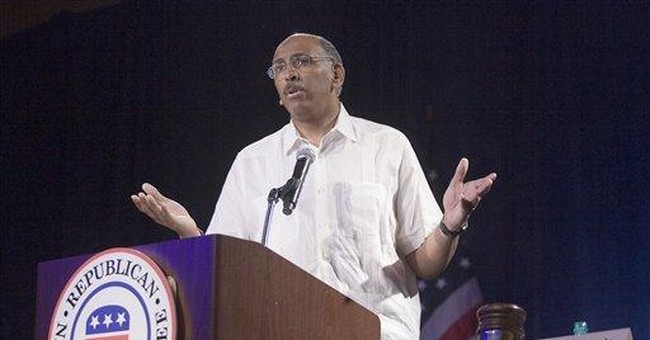 Steele has received a lot of bad press this week for gross (in every sense of the word) misspending of donors' money. First, the story broke that RNC money paid for a night out on the town for a group of young donors and staff at a bondage-theme nightclub in West Hollywood, Calif., aptly named Voyeur.

Steele didn't attend the party, and the RNC staffer who approved the reimbursement of the expenses has been fired. Nonetheless, other stories have leaked out suggesting Steele has his own problems, namely very expensive tastes. During his tenure, he's spent RNC money on private jets, limousines, and four-star hotels on his frequent travels -- nearly $9,000 at the Beverly Hills Hotel on one stop. The RNC has about $13 million less in the bank than when Steele became chairman, and he's raised less than he's spent during his tenure, putting the RNC in poor financial shape heading into elections in the fall.

But money isn't the biggest issue. And even if the Voyeur club incident hadn't made the RNC the laughing stock of late-night TV, not to mention alienating many in the GOP's base, Steele is still not the right person to lead the party in the 2010 election. The Republican Party needs real leadership from someone with a proven record. Without that leadership, it's hard for the party to have a public face, especially since the Democrats control the White House and Congress.

Without a real leader, it's easy for others to define the leadership of the party. The media -- and even some rank-and-file voters -- have dubbed Rush Limbaugh and Glenn Beck the party's leaders. But Limbaugh and Beck are entertainers and their goal is to drive ratings, not win elections -- and the two goals can sometimes be mutually exclusive. Besides, neither Limbaugh nor Beck has ever voiced aspirations to lead the party, and Beck often bends over backward to criticize Republicans. If the party wants a leader, it will have to look beyond talk radio.

The party could look to its own elected leaders. There are lots of good people to pick from: Sen. John Thune, Rep. Paul Ryan, Gov. Bobby Jindal, and Gov. Mitch Daniels -- to name just a few. But all these people are busy with legislative duties or running their states. So why not look to someone who's been elected -- and therefore understands best how elections are won and lost -- but is out of office now and isn't planning to run for office again anytime soon.

Jim Talent comes to mind. A four-term congressman from Missouri, he won a special election for U.S. Senate in 2002 but lost his re-election bid in the Democratic sweep of 2006. He recently announced he won't be running to fill retiring GOP Sen. Kit Bond's seat this year, which means he could devote full time to the job.

Talent's accomplishments are many. He was one of the principle authors of the 1994 welfare reform bill. He is vice chairman of the bipartisan Commission on the Prevention of WMD Proliferation and Terrorism. He's a terrific debater and as bright as they come. Talent could actually help the GOP regain the mantle as the party of ideas.

But before the RNC can pick new leadership, the current leader must step aside. There are already those who are calling for Steele's forced ouster. But that would be unfortunate, and tough under the party's rules. Far better for Steele to decide it's time to go on his own.