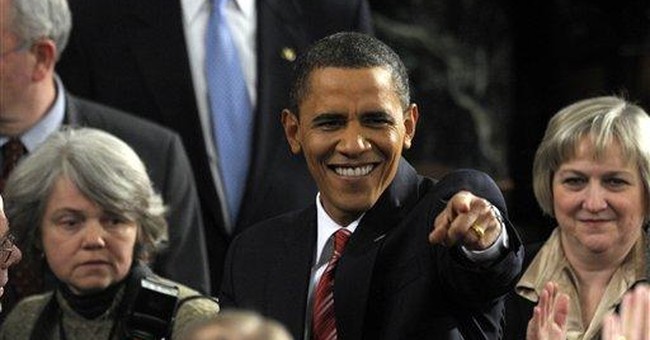 President Obama failed a major test of leadership in his State of the Union address this week. He offered only platitudes and failed policies on job creation and little more on controlling spending. Although the president talked about deficit reduction -- a major concern not just to the American people but to our debt-holders, especially China -- he offered no real plan to accomplish it. His much-touted government spending freeze turns out to be thawing before it begins. The freeze exempts not only defense and homeland security spending, it doesn't even attempt to tackle entitlements -- and it won't begin until next year. If the president were serious about controlling the deficit, he'd order cuts, not an illusionary freeze, and they would begin immediately.

President Obama just isn't much of a chief executive. Having spent some 15 years serving on corporate boards of directors, I've seen the way successful CEOs manage falling revenues and escalating costs: They make necessary cuts or else the company goes broke. They do it by asking their subordinates to come up with plans for reducing costs in their own departments or divisions, often by requiring all divisions to trim their budgets by some percentage. It's bitter medicine, but it's the only one that works.

But across-the-board spending cuts are rare in government. Every Cabinet head has reasons why there is not a penny to be saved in his or her department. That's nonsense. No one can tell me that there are not some programs in every department in the federal government that are wasteful, obsolete, or over-staffed.

If the president were a real leader, he'd be instructing every Cabinet secretary to come up with a list of cuts in his or her department. No one likes to do this, especially in Washington, where the size of your budget is a good indication of your power and influence. But in the real world, when your revenues (or incomes) are shrinking, you don't just say, "Well, I'll keep spending at my current rate for a while and see how that goes."

Of course, the president can't do this alone. Congress would have to go along by trimming appropriations, which they are loath to do, especially if the money the government intends to spend affects their own states or districts. But the president can also veto appropriations that bust his budget, something President Obama threatened he would do, but not very convincingly. He should take a page out of President Reagan's playbook, or President Ford, who vetoed numerous spending bills in his 2.5 years as president.

President Obama's only idea for putting a dent in the deficit is to tax his way out of it. Since he won't cut spending, he pledged to raise taxes -- but only on the rich and on Public Enemy No. 1: bankers, of course.

Again, if a corporate CEO tried to do the equivalent -- by big price hikes on his customers -- he'd soon be out of a job. That's because raising prices arbitrarily can end up reducing revenues if customers balk at buying. And when you lose too many customers, you're out of business.

Raising taxes may not solve the problem for governments either. Wealthy individuals can decide to work less if they're going to keep a smaller portion of what they earn, or they can sometimes find ways to shelter their money so they don't pay taxes on all of it. And with less money being spent by individuals as they choose and more money going into government coffers, the economy can actually lose jobs in the private sector even if it manages to retain them in the public sector. What's more, those public jobs tend to be less productive and more costly. And even politicians have to worry about their "customers," namely taxpayers who can vote them out of office.

President Obama showed himself at his testiest in the State of the Union when alluding to recent gains by Republicans at the polls. "(A)fter last week, it is clear that campaign fever has come even earlier than usual," he said. But instead of offering to change course from the leftward drift that has come to characterize his administration to the center, where the vast majority of the American people are, he chose to largely reiterate an agenda that fewer and fewer Americans support. Not only did his words lack the eloquence that helped propel him onto the national political stage, but he seemed more defensive and irritable than he has in the past. All in all, it was a disappointing performance and one likely to do nothing to reassure a nervous public.