Slouching Toward the Center 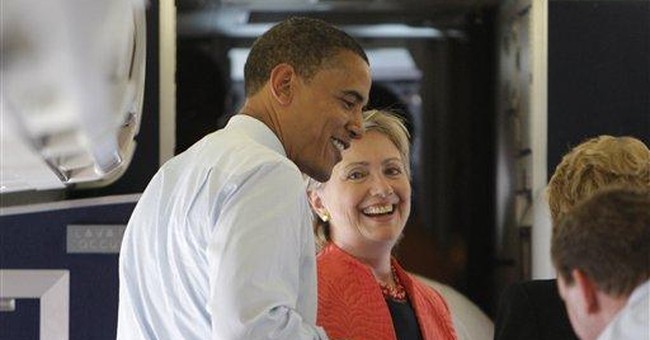 The Senate has finally passed the reauthorization of the Foreign Intelligence Surveillance Act (FISA), 69-28, after months of dithering, but one vote among the yeas comes as quite a surprise. Sen. Barack Obama, who just a few months ago threatened to filibuster the bill, had a change of heart -- or was it just a change in campaign strategy?

The legislation authorizes continued warrantless wiretaps of suspected terrorists' overseas communications, so long as they are not U.S citizens, and gives retroactive legal immunity against lawsuits to telecommunications companies that assisted the government in earlier warrantless searches. In December 2005, the New York Times exposed the National Security Agency's secret program to monitor overseas conversations and e-mails of suspected terrorists -- drawing howls of protest from Democrats and groups like the ACLU. Ever since, Democrats have been trying to rein in the government's ability to eavesdrop on our adversaries, and Sen. Obama has been among the most vociferous critics.

Back when he still had to worry about winning the Democratic nomination, Sen. Obama said he "unequivocally oppose(d) giving retroactive immunity to telecommunications companies" and would support a Senate filibuster to keep such immunity out of the bill. But that was then. Now that he is the party's presumptive nominee, well, it's time to do a little repositioning.

"Given the choice between voting for an improved yet imperfect bill, and losing important surveillance tools, I've chosen to support the current compromise," Sen. Obama wrote in a letter to his left-wing supporters posted on his website earlier this week. "Now, I understand why some of you feel differently about the current bill, and I'm happy to take my lumps on this side and elsewhere," he added.

Yeah, right. Translated into plain English, what he's saying is, "Deal with it. You guys have nowhere else to go, and I need the votes of centrist Democrats and Independents if I am to close the deal in November, so grin and bear it."

Now, there's nothing new about a presidential candidate moving to the center after the primaries; that's what politicians traditionally do. What is so galling about Sen. Obama's actions is that he self-righteously denies he's doing it. He told a group of supporters in Atlanta this week that they shouldn't believe "this whole notion that I am shifting to the center … The people who say this apparently haven't been listening to me," he claimed, referring to himself as "a progressive."

Yet his FISA vote is just the latest in a string of policy reversals aimed at moving him from the left fringe to the center of American politics. On the District of Columbia's all-out ban on handgun ownership, the New York Times reports that "(a)s recently as four months ago, he seemed to speak in favor of the law; two weeks ago, however, he seemed to applaud the Supreme Court ruling (striking down the law) without precisely saying so."

On the issue of late-term abortions, Time reports that Obama seems to have shifted positions. The magazine says Sen. Obama told a Christian publication that late-term abortions must contain "a strict, well-defined exception for the health of the mother," adding: "Now, I don't think that 'mental distress' qualifies as the health of the mother. I think it has to be a serious physical issue that arises in pregnancy, where there are real, significant problems to the mother carrying that child to term." But he not only voted against legislation prohibiting partial birth abortions because it did not have a liberal health-of-the-mother exception, he condemned the Supreme Court decision that upheld the federal law banning the procedure.

Even on his signature issue of withdrawing U.S. troops from Iraq immediately after he's sworn in as president, Sen. Obama has begun to waver. His website claims he "will immediately begin to remove our troops from Iraq. He will remove one to two combat brigades each month, and have all of our combat brigades out of Iraq within 16 months." But just last week, Sen. Obama said that he will use his forthcoming trip to Iraq to make a "further assessment" of whether "conditions still hold" to withdraw troops that quickly.

The one thing Sen. Obama remains consistent on is that he's the candidate of change. Now we know that this means he intends to change his positions as often as he feels necessary to win more votes.