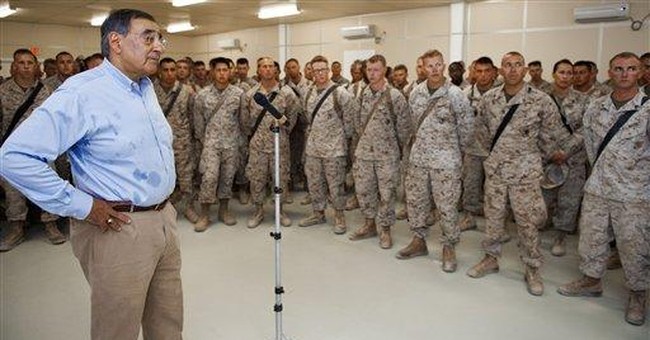 November 10, 1775, marks the glorious birth of the United States Marine Corps. Today, I would like to wish Marines everywhere a happy 240th.

In 1975, the Marine Corps was celebrating its 200th birthday, not long after I had celebrated my eighth.

It was around that time that a motivated Marine recruiter called me on the phone one evening. I still remember his amused confusion when he heard my squeaky voice and realized that I was just a little kid who had no idea why he was calling me.

As it turned out, my dad had submitted a recruiting card with my name requesting information. From what I remember, my dad did this so that the recruiters would send me some Marine Corps stickers and other stuff. My dad was a career Marine who often did funny things like that, as he was always proud to promote the Marine Corps.

I remember my dad standing in our kitchen that night grinning from ear to ear as the Marine recruiter kept right on talking to me about joining the Corps even after he learned that I was only a little boy. By the time the recruiter hung up, I was feeling mighty proud thinking that the Marines already wanted me to join when I became old enough.

I am thankful that my dad taught me by example to love my country and to respect the men and women who selflessly serve in the Marine Corps, as well as the other branches of the military.

Eventually, I did earn the title of United States Marine myself. It remains one of the best decisions of my life.

Once a Marine, always a Marine. It is something that sets the Marine Corps apart from the other services. The transformation is real. The brotherhood is forever. And the values are life changing.

Upon completing my commitment to the Marine Corps, I became a high school English teacher and wrestling coach. The core values I learned in the Marine Corps made me a more effective in both the classroom and on the mat.

Semper Fidelis has been the Marine Corps motto since 1883. It means “always faithful.” Faithful to the mission, faithful to each other, faithful to the Corps, and faithful to America. It is an incredibly high and noble standard to strive for in life, as it pushes Marines to constantly seek self-improvement.

Another Latin phrase is also ingrained in the minds of Marine officers: Ductus Exemplo, which means “to lead by example.” Although not always successful, I try hard to live my life this way, and I encourage my former students and athletes to do the same.

The Marine Corps taught me to emphasize team work that included each person striving to be their best. This created an excellent classroom culture at school, as well. Unfortunately, it is not a culture most schools foster. It goes without saying that most public schools’ standards and expectations are far inferior to the Marine Corps’.

How much does our overall culture value these traits today?

How many of our elected leaders currently embody these traits?

Marines are blessed to be immersed in a culture that expects these basic standards from them every day. It makes them better people and better citizens.

When each person on a team is trying to outwork their teammates, they make one another better. Striving to be the best is a mindset that I believe makes the Marine Corps so successful. The self-confidence that comes from commitment, sacrifice, and hard work was a trait I tried to instill among my students and athletes.

Knowledge and enthusiasm are two Marine Corps leadership traits that also helped me as a teacher. My students could see that I believed reading, writing, and wrestling were incredibly valuable, and these leadership traits helped me to inspire and to challenge the kids to take what I was teaching them more seriously.

I am incredibly proud of all of my former students who have volunteered to serve in the military. True to form, only a few have earned the title Marine. The commitment to sign that blank check with your life to defend the Constitution and America is a sobering, if not a scary, decision.

I wish more Americans would have the love of country and the intestinal fortitude to do it.

I believe our country would be better as a result. Our freedom is not free. The men and women in uniform pay the price to provide it.

If by some divine miracle the Marine recruiter who called me when I was only 8 years old reads this article, I would like to wish him a special happy birthday, as well. I’d also like to thank him for challenging me to earn the title, United States Marine. Semper Fi.