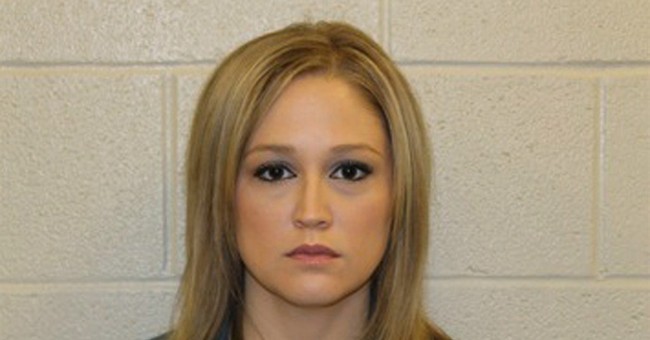 As the Democratic Party transforms America’s fundamental cultural values, mothers and fathers will soon be able to boast when their daughters grow up to be teachers who have sex with teenage students. I mean, who are we to judge, right?

In Philadelphia, 35-year-old Erica Ginnetti, a math teacher and married mother of three, received just one month in jail for her sexual relationship with a17-year-old male student. At her sentencing on April 3, Judge Garrett D. Page asked, “What young man would not jump on that eye candy?” He also told Mrs. Ginnetti, “I don’t believe you are a bad human being.” No, of course she’s not. Bad people support traditional marriage and America’s traditional moral values.

Other cultures in the world have legal ages of consent as low as 9 and 12 years old. Have we not learned that America is culturally narcissistic to expect anyone, let alone our female teachers, to hold our traditional moral values? No culture is morally superior to any other culture, remember? In fact, multiculturalists discourage immigrants and minorities from assimilating to America’s traditional values and customs. It is American’s who have traditional values who need to change.

Clearly, a surprising number of female teachers appear to have a natural sexual attraction to teenage students. Since the women are born with these natural feelings, why should society treat them like deviants? Many of the students are 18 years old. And what if the women prefer other cultures to America’s? How can we be so intolerant?

Plenty of men already welcome the cultural shift. “Saturday Night Live” recently performed a skit of the Ginnetti trial glorifying the male fantasy and mocking traditional moralistic values. SNL portrayed the teenager as a hero and his mother as a sobbing killjoy.

Granted, many of these teachers like Ginetti are married with children and their sexual affairs almost always destroy their own families. But again, who are we to judge? Open relationships are simply alternative values.

Take the LGBT community for instance. Non-monogamous relationships and marriages are an open secret and widely accepted. In fact, a homosexual teacher’s marriage would probably stand a better chance of surviving a teacher-student sexual relationship better than a traditional marriage because the homosexual community understands that monogamy is just old fashioned.

Let’s face it; prohibiting sexual relations between female teachers and students has just been one more way that social conservative Americans have discriminated against women who have unconventional sexual values. Thankfully, our culture is transforming quickly.

In Louisiana, 32-year-old Shelley Dufresne, a high school English teacher, avoided jail time and will not have to register as a sex offender after pleading guilty to having sex with a 16-year-old male student. The state’s legal age of consent is 17. Because of the South’s priggish statutory laws, poor Mrs. Dufresne will have to undergo mandatory mental health treatment. She also had to surrender her teaching license because of her natural sexual desires.

Furthermore, Dufresne, who is also a married mother of three, awaits yet another trial related to her relationship with the same unidentified student. Allegedly, she and another teacher, 24-year-old Rachel Respess, engaged in group sex with the student for nine hours on Respess’s birthday.

Dufresne’s father is a district court judge, and no parent should ever feel ashamed of their child’s natural sexual behavior. Dufresne and Respess surely learned this lesson during all the diversity and tolerance training teachers receive these days. Of course, these two teachers just took those lessons to another level.

Furthermore, Mrs. Dufresne and Ms. Respess’s shared lover was just shy of his 17th birthday. Mrs. Ginnett's 17-year-old lover was of legal age in Pennsylvania. Why is America imposing old-fashioned puritanical morals on society in general? But most concerning, why are female teachers being persecuted for their sexual identity?

As long as America’s traditional values are not branding stigmas on individuals who embrace exotic sexual values, who are we to judge?