Lawrence Meyers
|
Posted: Jul 14, 2018 12:01 AM
Share   Tweet
The opinions expressed by columnists are their own and do not necessarily represent the views of Townhall.com. 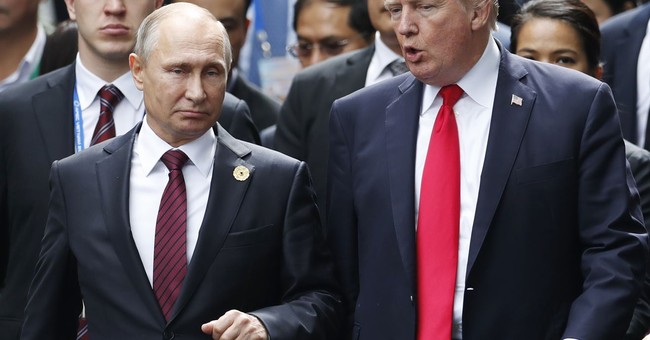 Robert Mueller’s indictment of 12 Russian intelligence officers has pushed Democrats into the third stage of the Kübler-Ross grief model: bargaining.

Neither the seemingly endless denial stage , marked by heroic faithless electors and “Not My President” proclamations, nor the ongoing anger phase, involving endless protests that lack any coherent message other than “Trump is _____ist”, made any difference to the electoral result.  If anything, they demonstrated the true colors of those suffering from Trump Derangement Syndrome.

Now, Democrats are literally praying/bargaining that Mueller’s indictment will return the world to the way it was, and that Trump will be expunged into the void without having to step into Mr. Peabody’s Wayback Machine.

Democrats see the indictments as definitive proof that Trump colluded with Russia.  Even if collusion never occurred, those Ruskies influenced millions of weak-minded Americans to vote for Trump.

There is no evidence to support any of this, but remember, Democrats are grieving so they are latching on to anything they can.  Acceptance won’t come until January 21, 2025 – and probably not even then.

Regarding the indictment, Deputy AG Rod Rosenstein stated, “There is no allegation that the conspiracy altered the vote count or changed any election result.”

Nor could any analysis regarding vote count ever be reliably conducted. It is impossible to determine exactly what content was available to the general voting public, how many people accessed it in the aggregate, how many voters read any specific piece of content, how it may or may not have influenced them, or how any such effect would have made any material difference in the Presidential election.

One would also have to consider the possibility that whatever information was consumed may have turned voters towards Clinton rather than Trump.

It’s foolish to assert that any single piece of content would be the sole reason to sway a voter in one direction or the other. Undecided voters take in countless pieces of data to make a determination, and drawing a direct causal effect to any given item is folly.

Of course, that doesn’t stop Democrats from inferring what the rest of us already know they believe:  that the American public is stupid, must be told what to do, and cannot think or make decisions for themselves.  This is consonant with their belief that Big Government should be in charge of everything.

Instead, both Democrats and Republicans are missing the bigger picture.   Showtime’s “Homeland” had a plotline last season in which Russia’s hacking goal was to de-stabilize America, not to get a particular individual elected.  The show was prescient, as Mueller’s investigation and Democrat uproar are huge mistakes.  They play right into Putin’s actual goal: destabilization of America.

Indeed, it makes no sense that Putin would want to throw in with Trump, who was known to be a pugilist and tough deal-maker.  If anything, Putin would be begging for the continued incompetence of Hillary Clinton’s foreign policy legacy as Secretary of State.

Let us suppose, however, that voters were indeed influenced by some non-specified content that resulted not merely in a single vote change, but enough changes in exactly the right distribution so as to cost Trump 18 electoral votes.

Here are the states with the 10 closest margins of victory:

It would take tens of thousand votes, in some combination involving exactly those states, or six-to-seven figure swings in other states, to sway the election.

[Mind you, some polling outfit paid by Trump opponents will attempt to conduct exactly such a survey, and conclude that, of course, it swayed the election.]

The fact that there was foreign meddling is of serious concern, must be addressed, and every possible step should be taken to eradicate it.

However, it strikes me as hypocritical to latch onto the 2016 election while dismissing the fact that all voters are inundated with endless streams of false or biased information from an infinite number of sources.

Are we to presume that decades of left-leaning news media, anti-Conservative popular culture content, and biased polling, do not qualify as election meddling?  What exactly qualifies as fair messaging and what qualifies as meddling?

Again, the Russia revelation is bad news for American democracy.  I’m not trying to justify it, however, by pointing out the dirty little secret nobody in this country wants to admit: our voting system is not secure and it is unreliable on multiple levels.

Electronic voting is the worst idea ever – an idea pushed by Democrats who couldn’t figure out butterfly ballots in Florida’s 2000 presidential election.  Electronic voting is neither secure nor secret.   Democrats are darn upset about Russian meddling, but when asked about voting security via Voter ID, doing so is suddenly racist.  At my local polling place, anybody can waltz in, identify himself by any name on the voter roll, and vote.  They could even return multiple times throughout the day, because the kind-hearted senior citizen volunteers aren’t going to recognize them.

And let’s recall the ongoing AG prosecution regarding vote harvesting in Texas, which has corrupted countless races over numerous election cycles.

By the way, there's one other thing that has always troubled me about Democrat allegations of Russian "meddling". If they are so upset about this, why are they utterly silent in regards to lax oversight of Obama-era state department grants made to an NGO opposed to Israel's Likud Party and PM Netanyahu?