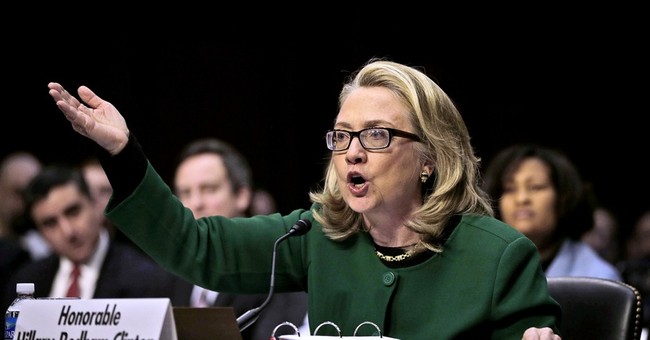 Gross incompetence at the State Department, likely stemming from decisions by Hillary Clinton, is a primary reason why Ambassador Chris Stevens and three other Americans were killed in the Benghazi terrorist attack.

A source who has asked to remain anonymous due to their proximity to the investigation, said that much of the blame for the murders rests squarely within the State Department, then under the command of Secretary of State Hillary Clinton.

The State Department had final decision-making authority over all of the following:

· The selection of the 17 February Martyrs Brigade, affiliates of terrorist organization Ansar al-Sharia, as security for the U.S. Special Mission Compound, which housed the Ambassador;

· The refusal to provide U.S. Special Forces as security for the Ambassador;

· The location of the compound, which was located next door to an outpost of terrorist organization Ansar Al-Sharia; The “stand down” order that delayed military contractors at a nearby CIA Annex from aiding the compound.

The 17 February Martyr’s Brigade, or 17 Feb, was the largest and most well-known militia group in Libya at the time of the attack. Its moniker refers to an incident on that date in 2006, when Libyan security forces killed a group of people outside the Italian consulate in Benghazi.

The militia was born during the war against Qaddafi, taking advantage of the security vacuum to collect weapons and recruit personnel. After the September 11 attack on the compound, members merged into Ansar al-Sharia, a coalition terror organization whose name means “Partisans of Sharia Law.”

However, there appears to be no explanation for why the State Department chose a known Jihadist group to protect Americans in a war-torn Islamic nation.

At a hearing of the House Oversight and Government Reform Committee in May of 2013, Rep. Blake Farenthold (R – TX) told Eric Nordstrom, the State Dept.’s Regional Security Officer in Tripoli at the time, “I’m stunned that the State Department was relying on a militia with extremist ties to protect American diplomats. That doesn’t make any sense. How does that happen?”

Nordstrom went on to list a host of cases in which local militias, in Islamic countries, had betrayed and murdered their American employers, implying that such poor tactical decision-making was not an unusual occurrence at State.

Despite all this, 17 Feb was chosen to handle security for the Ambassador. Who made the ultimate determination? A source close to the investigation says Hillary Clinton made that decision.

“She could have outsourced that work to anyone,” the source says. “17 Feb was never properly vetted. Even a casual look at Middle East newspapers would have revealed them to be Ansar al-Sharia affiliates. As early as that summer, the Libyan government was conducting air strikes on 17 Feb. Obviously, nobody at State read these reports.”

The source went on to say, “The 17 Feb guys that resided on the compound were paid by us, were fed by us, we gave them cars, they swam in our pool, and they repaid us by participating in the attack.”

Kris “Tanto” Paronto, one of several military contractors housed in a nearby CIA Annex who attempted to rescue Ambassador Stevens, says “We did not trust 17 Feb. They were a former terrorist organization and we believed the group had been infiltrated by Islamic Radicals. Even beyond this, though, there is a bigger issue.”

“We normally train directly with local militias in other countries, which is a tactically sound decision. It is critical that a rapport be established with 17 Feb for them to be used as a Quick Reaction Force. While our Chief of Base had spoken to them numerous times, the GRS staff itself – the people supporting the agency at the Annex -- never spoke to, worked with, or trained with any 17 Feb commanders or members.”

Tanto reports that the Blue Mountain Group, a group of unarmed Libyan security guards outside the compound gate, either abandoned their posts as the attack began, and may have even opened the gates for the terrorists to enter. There was no “break-in” as has been falsely reported.

Tanto further says thathe had been in charge of high-level ambassador protection in Iraq on previous occasions. Thus, when he saw the compound, he knew something was “extremely abnormal.” The eight-acre compound was too vast to be effectively fortified and defended.

“I chalked it up to the State Department being idiots, because they never did anything that made sense security-wise,” he said, reiterating his statements from the recently released best-seller, “13 Hours: The Inside Account of What Really Happened in Benghazi.”

The sheer indefensible size of the compound was but one mistake. A second fatal error was committed by State Department Undersecretary Patrick Kennedy, who refused to provide U.S. Special Forces security, according to a Wall Street Journal editorial by Gregory Hicks, the former Deputy Chief of Mission at the US Embassy in Tripoli.

Who Gave Bob the “Stand-Down” Order?

There is no question that a “stand down” order was delivered to Tanto and the operators directly, by their Chief of Base, the CIA official known only as “Bob.” The operators have corroborated that the order was given to them while Bob was on the phone.

Until now, however, exactly to whom Bob was speaking to has been a mystery.

Our source reports that Bob was seeking assistance from none other than the 17 February Martyr’s Brigade – the very group participating in the attack.

“Bob was literally on the phone, calling for help from the guys who were in the midst of attacking our people,” our source says. “Interdepartmental communication was so poor that he didn’t know that he was essentially calling al-Qaeda to save our people from al-Qaeda.”

Additionally unreported until now, was that Bob made a second call while Tanto and his team were in their SUVs, ready to roll to the Ambassador’s rescue.

According to the source close to the investigation, “If the chain of command was followed, and there is no reason to believe it wasn’t, Bob was on the phone with the Chief of Station in Tripoli, who in turn would have been in direct contact with the Seventh Floor at State.”

The “Seventh Floor” is where the highest-ranking State Department officials, including Hillary Clinton, are located.

Additional military support wasn’t just lacking during the battle, but well after it ended. After evacuating everyone from the compound and CIA Annex to the Benghazi airport, hours after repeated calls for help had been made, no U.S. plane ever came for them.

All that time passed, four men were dead in a terrorist attack, yet not a single US asset showed up.

It was if everyone involved literally did not exist.

I offered the only two logical explanations for this lack of support, both of which Tanto agreed with. Either there was gross incompetence at multiple levels, across multiple assets in multiple regions, including Washington, all occurring at that exact time when help was needed most…

…or that calls for assistance were received, but deliberately ignored.

The former theory is implausible, but not impossible. The latter theory is both plausible and likely.

More than one report

After all, who wants to tell the American people about missiles being sold to any Islamic terrorists, regardless of who they are allegedly fighting against?

This theory would explain the cover-up emanating from Washington.

It, along with the pre-election embarrassment of a terror attack, would explain the Administration’s adherence to the ludicrous “offensive video” explanation for days after the attack.

It would explain why the operators have not been interviewed or invited to testify before the Accountability Review Board. The ARB report is Washington politics at its worst – a document filled with bureaucratic nonsense about “recommendations” and references to the operators only facing “a few skirmishes” when returning from the compound to the Annex when, according to our source, “more than eighty terrorists were killed in lengthy firefights.”

It should come as no surprise that Hillary Clinton appointed four of the five people to the ARB.

It would also explain why Hillary Clinton thinks there is no difference between a terrorist attack and a spontaneous demonstration.

Amidst all these new revelations, it is easy to forget the distinction between the Ambassador’s compound and the nearby CIA Annex. This is critical, as it highlights the heroism of Tanto and his comrades.

These brave individuals were hired strictly as security for the case officers at the CIA Annex, not for the Ambassador’s compound. It was only during a routine meeting that Tanto told the compound’s occupants, “if you are in trouble, give us a call and we’ll come get you.”

Civilians intellectually understand that military service is about sacrifice, dedication, honor, and bravery. To men like Tanto, however, those words have a primal, visceral meaning. There was no legal or operational requirement for the operators to risk their lives.

Each man did so for one reason: they gave their word.

That was one reason the delay was so agonizing. The other reason was that nobody else was coming to help the Ambassador and his group, and the operators knew it. They were completely alone. The compound’s house had been set on fire. There was no air support. There was no cavalry.

Despite the heroic acts of Tanto and his comrades, the U.S. Government and the mainstream media have tried to bury everything having to do with their story. The disrespect shown to them by their former employer, and suppression of the truth, is what motivated the men to come forward.

Tanto said, “We watched on TV, as the news media distorted the facts. The story was being politicized, instead of it being about what was important: the sacrifices of Tyrone Woods and Glen Doherty. At one point, I heard on NPR how we were figments of the right wing’s imagination!”

Besides never being asked to testify at any hearings, the men were also denied reimbursement for their losses in Libya…right down to their socks, undershirts, and underwear.

The last straw came when, immediately following the memorial service for their fallen comrades, they were asked to sign non-disclosure agreements.

“We couldn’t stay silent after that. We resigned immediately,” Tanto said. “This has never been about politics. It’s about people hearing the truth, wherever it leads.”

As for whether a flood of emotion hit Tanto after the incident, he says it still hasn’t come out. “I’m holding on to it. It’s all still there. I need it to strengthen my resolve for all the naysayers who claim this didn’t happen.”

That’s why the support the team has received on social media means more to them than words can express.

“Please tell everyone how much it means to us to know when Americans have our back, so we don’t have to fight anymore. Any veteran just wants respect for what he did. It is so powerful to see some naysayer on Twitter say something and have a hundred replies bury him. “

“It helps keep the demons at bay.”