A Jew Walks Into A Nazi Bakery…. 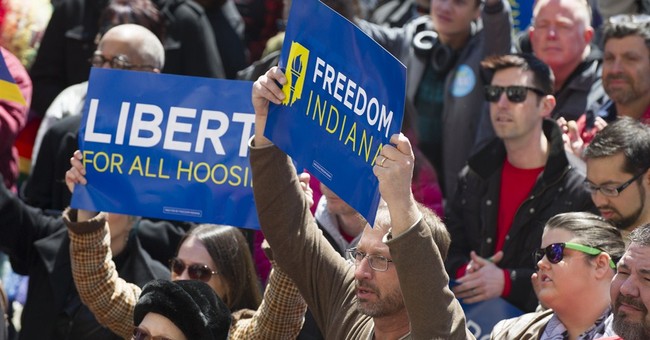 The law is explicit. The government cannot substantially burden anyone from exercising one’s religion. If it does so, it must “further a compelling government interest and be the least restrictive means of furthering that interest.”

This is no different than the laws in 19 other states, and the Federal Religious Freedom Restoration Act that passed in 1993 – by unanimous vote in the House, 97-3 in the Senate, and signed by the ultra-Right-wing-nutjob Bill Clinton.

So let me explain this to the dumb Liberals out there. Anything involving a public service isn’t going to be denied to a gay person. Furthermore, if a person or a company or religious organization engages in any kind of discrimination for “religious reasons”, the courts apply the test of “strict scrutiny” (the Sherbert Test) to the claim of religious infringement.

So if a group of religious psychopaths decide to throw gay people off buildings, behead Christians, stone women to death, and set heretics on fire, the government isn’t going to exempt this behavior because it’s a religious belief (Strangely, however, Liberals have proven that they are accepting of this religious behavior).

The Left is fine when government restricts freedom, but when that rare law comes along that reiterates it, they melt down like Hillary at a Benghazi hearing.

The Left hijacked this issue as it always does, by re-framing it to fit its own depraved philosophy, one that always de-values life and freedom. It is exactly the way the abortion debate has been handled. Pro-lifers frame the issue as a matter of murder. Pro-abortionists frame it as a matter of “choice”.

In the case of religious freedom laws, Leftists re-frame the reiteration of a group’s freedoms, instead making those protected by the law appear as bigots. It isn’t a pro-freedom law, it’s an anti-gay law. The complicit mainstream media, like USA TODAY, calls it a law “that grants businesses the right to refuse service to gay and lesbian couples.”

What a load of crap. How did this nonsense get started? Because last time a law like this passed, CBS News falsely claimed that an EMT could refuse to give aid to a homosexual, citing religious beliefs.

Never mind that no EMT would ever do something like refuse care to a homosexual, because EMTs are EMTs because they like saving lives.

But leave it to the Left to concoct the most ridiculous and impossible circumstance that Philip K. Dick could dream up, and make it reality. Firefighters won’t put out a gay fire! What if the only hospital in town refuses service to a gay person? What if the only barbershop in town won’t cut a gay head?

The Left must do this, because without victims, government has nothing to fix, and people cannot be controlled.

The Left is so very strident against discrimination – oh, but only gays, blacks, Hispanics, illegal immigrants, and Radical Islamists need apply for the victocracy.

Yet they don’t care about discriminating against Christians, and will do anything they can to align themselves against the Jews and Israel, because Leftist philosophy is anti-freedom, anti-religion, and ultimately anti-human.

The great irony is that these laws were passed because a gay couple decided to sue a bakery that wouldn’t make them a cake for their gay wedding. Instead of the couple just taking their business elsewhere, and doing everything they could to shame the business that turned them down, to put up awful reviews on Yelp, to protest in front of the store, and promote the more open-minded bakery, they chose to be vindictive.

Which forced the very governmental action they are now decrying.

We are now longer in an age where the Civil Rights Act is necessary, because of this silly thing called the internet. Were I, a Jew, to be refused service at a bakery, I wouldn’t need to go running to the government for justice. I’d be writing at TownHallFinance.com, making a stink at every review site I could find, marching with every other right-thinking person in town in front of the bakery, and publicly shaming the owners. They’d be out of business in a week.

That’s called the free market. Let the people decide. I don’t need to sue. I don’t need the Anti-Discrimination Bakery Act. I will not be a victim and cry to the government about the Aryans down the street.

And if somehow enough people in my one-bakery town patronized the Bakery of Hate enough to keep it in business, then I’d know who the bigots are in my town. I’d rather have them out in the open, and know who’s who.

My guess is they’d all vote Democrat, anyway.