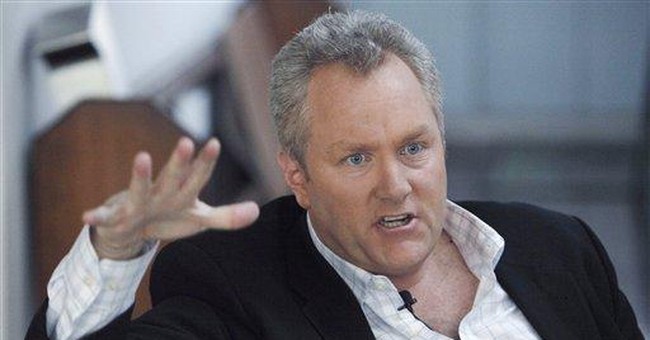 “Politics is downstream from culture. Reclaim the culture, you reclaim politics”. Those are the words of my hero, the late Andrew Breitbart, who inspired me to become a Conservative Warrior.

The problem with popular culture is that, up until recently, production and distribution was concentrated in the hands of the few, and they are all Liberals. Despite one failed movie and TV show after another that sought to undermine American and Conservative values, Hollywood still hasn’t gotten the picture.

There’s a reason that gross box-office ticket sale volume is down from the early part of the century, that studios have been forced to focus on properties that already have brand awareness, and that cable television is in a new golden age. Much of America has checked out of popular culture because the content does not reflect its values.

America is clearly hungry for this approach. We’ve already seen multiple examples. “The Hunger Games” and the “Batman” trilogy, along with virtually every Marvel film, delivers quality entertainment, a great story with interesting characters, and themes that are undeniably Conservative. It isn’t merely that there was brand awareness on these hits, because I guarantee you, if these films skewed left, they would not be the monster winners they are.

“The Hunger Games” is about fighting for individual freedom against a repressive, elitist government. “Batman” is about one man using his gifts to fight against evil. Virtually every Marvel story – particularly “Captain America” – is about finding the heroism in oneself to battle against that which is criminal, and wrong.

How about TV? “The Walking Dead” extols Conservative values, while almost deliberately laughing at the Left. It’s about making the hard choices to survive; of banding together to form a family when all is lost; about loyalty; about not giving in to evil but taking the fight to it. “Battlestar Galactica” showed the human race in diaspora, trying to reconstitute society, with the inevitable right choices being the ones that demonstrated leadership, a strong hand against the enemy, and faith in God. I’d even argue that “Lost” was Conservative, in that every character was forced into developing into a better person in order to defend themselves, and others, against an entity of pure evil, and they all are rewarded not only with redemption in this life, but the afterlife. How about reality television? “Duck Dynasty” anyone?

So how do we reclaim the culture? We have everything we need already. The means of production and distribution are now democratized.

On the production side, we have loads of Conservative talent. It isn’t just in Hollywood but all over the country. From young talent to journeyman to unemployed veterans, the creators already exist. Those in Hollywood who are Conservative, and it’s a lot of people, must keep their politics quiet.

As for content, the problem thus far is that Conservative content is too eager to be Conservative and not enough attention is given to it being quality entertainment. “If I want to send a message, I’ll use Western Union,” as Alfred Hitchcock once said. The thing about the examples cited above is that we never once hear an overt, or even whispered, piece of Conservative ideology. It’s just characters and story playing out in such a way that our values are championed. That’s what our stories need to be.

It’s really not that difficult.

So we have the talent, and if they can be guided to produce the right content, then Conservatives will flock to see it.

Distribution? We already have Philip Anschutz, who owns Regal Cinemas, the largest cinema chain in the US. He’s a Christian Conservative. He’ll play whatever makes money in his theatres, and if it comes down to a choice between quality entertainment for us as opposed to the Left, he’ll show our picture.

Television? A new network on cable or satellite is easy enough to create. There are fees to carry it on existing networks, but as we are seeing, it’s also easy to stream the content through any number of providers. Then that network must be filled with content – from drama to comedy to talk shows to news to game shows to reality.

What do we need financially? I say it’s $1.5 billion for movies, $1 billion for television, and $500 million to set up our own version of YouTube Studios, where Conservative talent who haven’t been discovered yet can experiment and workshop their content.

Who is going to put that money? The only people we need already exist, in droves. All they want to see is a real plan, a definitive guide for them to make money on their investment. They don’t want bad movies exhibited on the church circuit. They want quality content that will draw audiences and advertisers.

Does that plan exist? You bet it does. It’s as anti-Hollywood as it can be, a complete meritocracy, without a bureaucratic structure, designed to be efficient and effectives, without the suboptimal and nonsensical risk management employed by Hollywood.

All the financing doesn’t have to come in at once. No smart investor would do such a thing. They would pilot the program, do a small scale version until there is proof of concept.

Who are the financiers? John Malone, the Kochs, The DeVos clan, the Waltons, Anschutz, Bernard Arnault, Carl Icahn – the list goes on and on.


We cannot sit back and wait for the Leftist vision for America fail only to turn it over to Establishment Republicans. The answer lies in changing the culture. $3 billion is a lot of money, but it’s nothing compared to what we risk losing.