Laura Hollis
|
Posted: Jan 14, 2021 12:01 AM
Share   Tweet
The opinions expressed by columnists are their own and do not necessarily represent the views of Townhall.com. 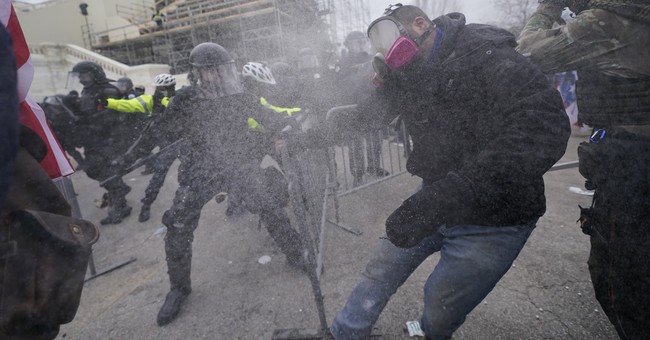 In a terribly unsettled time in American history, there are a few voices on both sides of the political aisle calling for "healing" and "unity." To say that these are desperately needed is an understatement. But merely wishing for it will not make it so.

To use an analogy of bodily illness, just as physical healing is not possible without an accurate diagnosis of the ailment, there can be no political healing without truth. And, just as an accurate diagnosis is a prerequisite to the successful combination of all available treatment methodologies, there can be no national "unity" when large swaths of the country are being deceived -- or rationally believe they are.

In fact, a free and civilized society cannot survive at all without a firm commitment to the truth, deeply ingrained in and exemplified by its most fundamental institutions, including government, law enforcement, educational institutions and the national media (broadcast, social and otherwise).

The conflict, anger and widespread resentment we are seeing now are the consequences of abandoning honesty in favor of hyperbole, hypocrisy and hysteria for political gain. Contrary to the popular narrative, this is not recent and did not originate under President Donald Trump or because of him. But it has escalated since his inauguration in 2017 and is now at a dangerous fever pitch.

The country will pay a terrible price unless those charged with the leadership of this nation -- in all industries and disciplines -- put self-interest (clicks, follows, subscribers, Nielsen ratings, book deals and speaking tours) aside and step up to initiate the needed changes.

Just a few such changes in the national dialogue will put us back on the right path. They are simple and straightforward but by no means easy.

1. The hyperbolic accusations must stop.

Politicians have always lobbed accusations at one another while vying for votes. But the advent of international broadcast and social media has given those accusations much broader reach. As voters have grown immune to garden-variety statements of political differences ("X will raise your taxes"; "Y will cut needed spending on social programs"), the accusations have become more extreme.

But those, too, are losing their punch. (Every Republican candidate cannot be Hitler-in-waiting.) So, it is no longer enough to demonize one's political opponent; now the accusations are being lobbed at his or her followers as well. In other words, the American public has become the target of political propaganda campaigns -- not only by the candidates and parties but by academics, "influencers" and the national media.

Across the board, Americans are tired of being lumped into categories, labeled and demonized. No, most Democratic voters do not want communism. Black voters do want justice, but most do not support violence, rioting, looting and arson. Conservatives and Republicans are sick to death of being called "deplorables," Nazis, racists, sexists and bigots.

These accusations are false. They are poison. And they pit Americans against one another when what we all should be doing is holding powerful people's feet to the fire. Instead, we're at each other's throats, while the rich and powerful grow richer and more powerful.

2. The hypocrisy must stop.

The same standards must apply to everyone. Americans have felt betrayed by public figures who have not held themselves to the COVID-19 safety protocols they imposed upon everyone else. And when mayors and governors permitted Black Lives Matter protests last summer but banned other public gatherings, they irreparably damaged the credibility of the government's claims about the seriousness of the coronavirus, and the necessity of lockdowns and other severe measures.

Even more serious are the reactions to last week's attack on the Capitol. There is universal shock and outrage at pipe bombs left at the Republican National Committee and Democratic National Committee headquarters, and the injuries and deaths caused by a mob at the Capitol building. But it is equally shocking to watch public officials pretend that the violent unrest we all watched for months last year was any less serious or somehow justified. Hundreds of marches were held protesting police abuse, and most were not violent. But those that were caused billions of dollars in damage, destroyed countless businesses and resulted in the deaths of almost three dozen people. If we are to take the position that we cannot judge all protesters by the actions of a relative few, then neither can we lump all pro-Trump marchers with the small group of people who burst into the Capitol and wreaked havoc.

3. The deceit must stop.

Examples of government deception in recent years include the following claims: former President Barack Obama saying that "If you like your health care plan, you can keep it"; the Benghazi terrorist attack was prompted by a video (it wasn't); Bowe Bergdahl served "with honor" (he was a deserter who got a dishonorable discharge); the Iran deal prevented Iran from getting nuclear weapons (it did not); Trump colluded with Russia to "steal the election" in 2016 (no); the Hunter Biden laptop content was fabricated and part of a "Russian disinformation campaign" (not true).

Our press fanned the flames of these falsehoods, censored the truth and castigated Americans who questioned what they were being told. Americans no longer trust politicians or the media at a time when trust is more important than ever.

4. The censorship must stop.

Do you want people to believe you? Then truthfully answer their questions; be honest when you don't know (or when you've made a mistake); and provide evidence to refute any misconceptions. On issues as serious as, for example, COVID-19 treatments or election integrity, public safety and social stability depend upon confidence in government. Insulting people, treating questions as stupid (or traitorous) and foreclosing debate and discussion create impressions of incompetence and corruption.

Those who want unity and healing have to be willing to do the heavy lifting to restore the public's confidence in the country's institutions. That starts with truth. If we cannot obtain that, our problems are just beginning.