A Victory for Speech, Faith and Life

Laura Hollis
|
Posted: Jun 28, 2018 12:01 AM
Share   Tweet
The opinions expressed by columnists are their own and do not necessarily represent the views of Townhall.com. 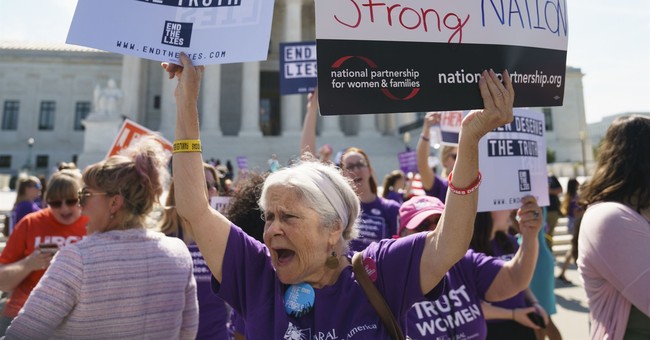 On June 26, the U.S. Supreme Court handed down its much-anticipated decision in the case of National Institute of Family and Life Advocates v. Becerra. At issue in the Becerra case was California’s odious Reproductive FACT Act, a 2015 statute that required pro-life (and predominantly Christian) crisis pregnancy centers to prominently display information (in multiple languages) announcing that they do not provide abortions, as well as information about where abortions are available. The law imposed fines of up to $1,000 per violation; given pro-life centers’ refusal to advertise abortion, such fines threatened the centers’ very existence.

Advocates of the law claimed it was necessary to “protect” women from “unlicensed” centers. This seemed to be a sleight-of-hand; only centers that provide certain medical services are required to be “licensed” under California law. Thus, pro-life crisis pregnancy centers, which do not provide medical services, are not even required to be licensed.

The plaintiffs in the Becerra case argued that the statute effectively forced them to advertise for abortion services, and was therefore a violation of their First Amendment rights of free speech and religion. They had lost in federal and state trial courts, as well as the Ninth Circuit Court of Appeals.

A 5-4 majority of the Supreme Court, however, agreed with the plaintiffs.

In an opinion written by Justice Clarence Thomas (joined by Justices Samuel Alito, Neil Gorsuch, John Roberts and Anthony Kennedy), the Court held that the Reproductive FACT Act was a presumptively unconstitutional regulation of speech based on its content. As such, it was subject to the “strict scrutiny” test and could only pass muster if it was “narrowly tailored to serve a compelling state interest.”

The state of California tried to argue that the state’s interest was in providing low-income women with accurate information about reproductive health services. The Supreme Court found this argument unpersuasive, largely because the statute, as written, targeted only pro-life crisis pregnancy centers, leaving hundreds of other agencies, clinics and organizations that see low-income women completely unaffected. Additionally, the Court noted that the state could advertise abortion services itself, without forcing others to do so.

The language of the majority’s opinion also reveals the Court’s strong suspicion that the Reproductive FACT Act was written not to provide low-income women with information but to silence speech with which the government disagrees. This, the Court noted, is impermissible.

Justice Kennedy wrote a concurring opinion in which he joins the majority, but goes further, chastising the state of California for engaging in what he calls a “paradigmatic example” of viewpoint discrimination. He writes, “The California Legislature included in its official history the congratulatory statement that the Act was part of California’s legacy of ‘forward thinking.’ But it is not forward thinking to force individuals to ‘be an instrument for fostering public adherence to an ideological point of view (they find) unacceptable.’”

In fact, much of the breathless argument about the “need” for the law has been transparently ideological all along. A New York Times article published a month after the law went into effect was titled, “Pregnancy Clinics Fight for Right to Deny Abortion Information.” Such a headline suggests that pro-life centers were the sole repository of information about abortion access. That is demonstrably false; abortion information is available online, in phone books, on billboards and in innumerable handouts distributed by Planned Parenthood and state health and welfare agencies. The media slant continues apace; NPR’s story about the Becerra case this week featured the headline, “Supreme Court sides with California anti-abortion pregnancy centers” and described plaintiffs as “abortion rights opponents,” rather than pro-life advocates.

For liberals, the real problem with pro-life clinics is not their licensure but their efficacy, as a quick read of the two articles referenced above makes clear. There are approximately 2,700 pro-life crisis pregnancy centers in the state of California alone -- more than three times the number of clinics that provide abortions. (This ratio is quite likely replicated around the country.) And the vast majority of women who visit pro-life pregnancy centers decide not to have an abortion. The existence -- and success -- of these clinics threatens Big Abortion’s bottom line.

For all the blather about being “pro-choice,” abortion advocates seem perennially perturbed by the number of women who choose life for their babies, rather than abortion.  The Reproductive FACT Act went after those who provide women with a choice -- a legitimate alternative to abortion -- and tried to force them to promote abortion.

Thanks to a slim majority in the Supreme Court, those efforts failed -- for now. The Becerra case is a victory for speech and faith and life. But it points out yet again that our most fundamental liberties hang by the thinnest of threads in one black robe on the nation’s highest court.