Laura Hollis
|
Posted: Apr 05, 2018 12:01 AM
Share   Tweet
The opinions expressed by columnists are their own and do not necessarily represent the views of Townhall.com. 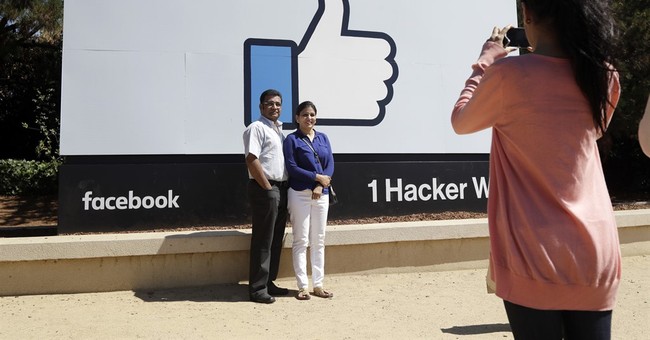 The outrage presently directed at Facebook for providing data that ended up being used by Donald Trump's 2016 presidential campaign is characteristically hypocritical. As former Obama campaign staffer Will St. Clair admitted in a 2013 New York Times article, the political use of user data aggregated by Facebook was tolerated by the company (and hailed as brilliant by everyone else) when it was used for a Democrat.

Similarly, billionaire entrepreneur and venture capitalist Peter Thiel made headlines (and enemies) when he backed Trump in 2016, and again when he announced that he was leaving Silicon Valley.

These reactions have the same root cause: Silicon Valley is a bastion of adherence to leftist orthodoxy.

As one who teaches entrepreneurship theory and practice, I'm amazed at how many of the geniuses who preach incessantly about the principles that built their companies into billion-dollar powerhouses cannot apply those same principles to the political process.

Take, for example, two practices that have dominated Silicon Valley's thinking for at least a decade: human-centered design and "lean" decision-making.

Popularized by Palo Alto design firm IDEO, human-centered design is an approach to the development of products and systems based upon how people actually use them. Users themselves are therefore deliberately engaged in the design process, and the focus is on user-centric -- as opposed to expert-centric -- thinking.

Lean decision-making has similar themes. Entrepreneur and author Eric Ries writes in his best-selling book, "The Lean Startup," that entrepreneurs must recognize they are launching ventures based upon untested (and often unidentified) assumptions. The successful entrepreneur will identify and test these assumptions up front -- using as little money as possible -- to get meaningful feedback from potential customers, and discover flaws in the business model, before he or she commits large sums of money and hurtles headlong towards failure.

The reason these principles form the basis for good business is because they're sensibly grounded in human nature. As such, they have powerful applicability to government as well as commerce. And yet the same gurus who are committed to prudent business operation simultaneously swear allegiance to leftist political philosophies that have produced failure after policy failure -- and at a staggering cost.

In contrast to the fiscally lean, customer-centric, collaborative, bottom-up ideation of successful Silicon Valley businesses, progressive leftism is the dogma of big government, top-down unaccountable decision-making, bloated bureaucracies, Ivy League "experts," and wasteful spending of astronomical amounts of money for intended results that never materialize. (One case in point: the United States has spent $22 trillion on the war on poverty since the 1960s, and has not even moved the needle.)

If companies operated this way, they'd go broke. Entrepreneurs either know -- or quickly learn -- that at some point, the prices of their products and services will be more than consumers are willing to pay. And quality matters; customers will not reward broken promises with brand loyalty.

Governments, on the other hand, assume that they can keep raising taxes on beleaguered citizens. But governments can go broke, too. Cities like Detroit and Stockton, California, have filed for bankruptcy. Illinois and New Jersey are effectively insolvent (and likely would file for bankruptcy if federal law allowed it). In Europe, spendthrift countries like Greece, Italy and Portugal have debt that dwarfs their national income, and are being economically supported by Germany and other more fiscally solvent nations.

Across the United States and the globe, citizens are fighting back, driven by intense frustration with a ruling class that refuses to listen to their constituents' legitimate concerns, including fiscal responsibility. But when voters rebel by choosing different politicians, the left (and their patsies on the right) treats those decisions as mere temper tantrums and actively seeks to thwart them.

When voting proves ineffective, people leave -- assuming that they can. (See, e.g., Illinois.) What will governments do next -- force people to stay and endure insufferable policies? It's not as far-fetched as it sounds. In June of 2016, British voters voted for "Brexit" -- for Great Britain to leave the oppressively bureaucratic European Union. Two years later, it still hasn't happened, and both major political parties are accused of actively trying to obstruct the express will of the people.

Here in the U.S., Donald Trump's election was a textbook, predictable reaction by voters to an out-of-control government whose excesses neither major political party has shown the will to curb.

The left doesn't like what voters have told them. But their response has been to double down on insults, to silence the opposition with speech codes, violent protests and social media censorship, and to import "new" voters, via a porous, unprotected border, who, it is assumed, will vote as they're told.

These are counterproductive practices, and the entrepreneurship crowd -- of all people -- should know better. Ries describes entrepreneurs' typical reaction to negative feedback from customers: Fire that customer and bring me one who'll tell me what I want to hear. This blinkered arrogance, he warns, is a prescription for failure.

It is, in business and in governance.

That said, disgruntled customers don't have to violently revolt against companies that displease them; competition ensures that there are other choices. But when citizens grow infuriated with governments that steal from them, lie to them, insult them, exploit them and refuse to listen when they express their displeasure peacefully through the electoral process, the choices are fewer.

And they are rarely peaceful.