Miscellaneous Musings About the Trump Victory

Laura Hollis
|
Posted: May 05, 2016 12:01 AM
Share   Tweet
The opinions expressed by columnists are their own and do not necessarily represent the views of Townhall.com. 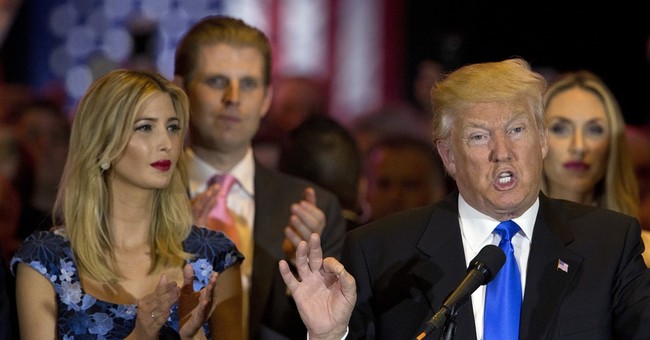 Is anyone not surprised by Donald Trump's ability to plow through the Republican primary process like a hot knife through butter? This is one for the history books, and scholars will be writing about it for decades (especially if Trump manages to pull off a win in November). But here are a few thoughts in the aftermath of the Indiana primary:

1. You cannot anger the electorate indefinitely without consequences. Americans are fed up with having things shoved down their throats by an arrogant government that no longer thinks of itself as representative. Congress won't act? The president will write executive orders. A heated issue is working its way through state courts and legislatures? Nuts to all that -- let's have five people in black robes impose their will on 320 million others. Add to that administrative and regulatory agencies that act with virtually no accountability; treaties and conventions that tie our hands without imposing similar strictures on other nations; and a lack of enforcement of our own laws, and you have a recipe for popular insurrection. This is a bipartisan phenomenon. (See, "Sanders, Bernie.")

2. Capitulation isn't compromise. Among the many things conservative voters are upset about is the GOP's apparent inability to do a single thing voters sent them to D.C. to do, whilst handing Obama victory after victory. When pressed on this point, the standard response seems to be: "But Obama will veto anything we pass." Uh-huh. So pass it anyway. Let him veto it. If you can't muster the votes for an override, so be it. But have something to show for your time there. Voters aren't punishing you for your failure to achieve; they are punishing you for your failure to try. What they see is neither courage nor cooperation, but cowardice and capitulation.

3. You can win without the media's approval. Just what are Republicans in Congress afraid of, anyway? The media. Can't have them saying all kinds of mean things now, can we? Because we all know that if the media hates you, you don't win elections, right?

Donald Trump has up-ended this entire narrative. Everyone is in a lather about the massive media coverage that Trump has received without having to pay for it. But what a great many people seem to overlook is that the vast majority of Trump's media coverage has been negative. (Does anyone remember the Huffington Post's decision to run any and all news about Trump in the "entertainment" section?) The media has been no friend to Trump -- and he keeps winning anyway.

Oh, sure -- there were a few pundits who noted with glee that Trump was capitalizing on voter discontent with the GOP insiders. But please -- Trump hasn't received anything like the fawning adulation that Obama received in 2008, when the media was all a-tingle over Obama's crisply pleated pants and polished vocal inflections.

A significant part of Trump's appeal is his in-your-face refusal to care what the media says about him. In fact, Trump has ridden the crest of one wave of media outrage after another, to dizzying heights of notoriety, if not outright popularity.

Trump has proven to intimidated and obsequious Republican politicians what many of us have been saying for years: Ignore the media, and take your message straight to the American public.

4. Trump is pulling Democrats, women, immigrants and African-Americans. The media would love for us to believe that Trump's core -- if not sole -- demographic is "angry conservative whites." But the story is more much complex than that. Trump is capitalizing on Democrat voter dissatisfaction, almost as much as Hillary Clinton's nemesis, Bernie Sanders; in Pennsylvania alone, 60,000 Democrat voters switched sides. Immigrants who have dutifully followed U.S. laws to come here resent those who have broken those laws, and they support Trump's insistence upon enforcing the law. Women vote for Trump in numbers that surprise pollsters and pundits. And there is more support for Trump among black Americans than history might suggest.

5. Trump has a better chance against Clinton than they're telling you. And now, with Donald Trump's path to the Republican nomination virtually assured, the discussion turns to Trump versus Clinton. Hillary Clinton is deeply unpopular, even (especially?) among liberals, who see her as a fraud and a sellout. She is unpopular with men, young people and even vocal feminists such as Susan Sarandon and Camille Paglia, many of whom have thrown their support behind Bernie Sanders. Clinton is dogged by the drip-drip-drip of Goldman Sachs speaking fees, classified emails, FBI investigations and accusations about Benghazi that linger like smoke. Other than women over 65, there is virtually no demographic that Hillary Clinton dominates.

And yet, the news has been filled for months with opinion pieces and polls purporting to show that Trump has no chance against Clinton.

Maybe. But these are the same people who told us that the Democrats would hold the house in 2010; who insisted that the 2014 elections would be "too close to call" and have "razor-thin" margins -- and who have insisted all along that Donald Trump's candidacy was a joke.

I think a lot of things are up for grabs.