Laura Hollis
|
Posted: Apr 21, 2016 12:01 AM
Share   Tweet
The opinions expressed by columnists are their own and do not necessarily represent the views of Townhall.com. 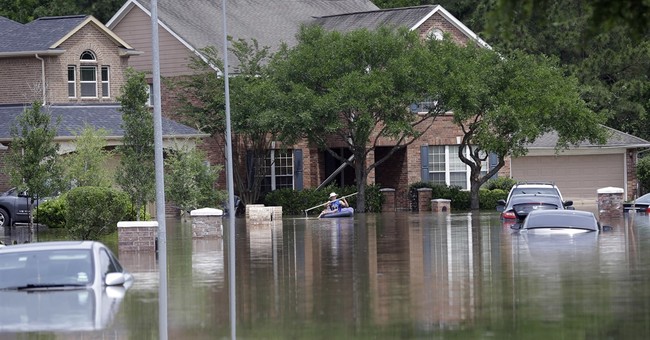 Trending
Earlier this week, the Weather Channel featured a brief video of the flooding in Brookshire, Texas. In the short clip -- which went viral -- a group of "good Samaritans" rescued a semi driver stranded by rapidly rising floodwaters. One of the volunteers, wearing a life vest, swam out to the truck attached to a rope that several men held onto from dry ground yards away.

The video demonstrates just how perilous flash flooding can be. By the time the driver was pulled from the cab of his truck, the water was already up to the headlights, and its flow was so powerful that six grown men had difficulty holding fast to the rescuer and the rescued.

But what stood out for me was the ethnic composition of the group of people performing the impromptu rescue: men who appeared to be of black, white and perhaps Hispanic backgrounds all pulled together to save another man from drowning. Commenters on the Weather Channel's site noted the same thing. One wrote, "Did anyone ask the rescuers if they were Democrats or Republican? Christian, Muslim or Jew? Doubt it ... They saw the need to help a fellow citizen and worked together." Another said, "Made me cry. This is what should be on the news." Still another said, "So beautiful. Why do most people believe this isn't the norm?"

Ah. Now there's a question. In truth, it is not remarkable at all that a group of people from a variety of ethnic, racial or cultural backgrounds find themselves in the same place at any given point in time in the United States. Nor is it remarkable that all of those people would pull together -- literally -- to save another man's life.

What is remarkable -- and deplorable -- is that that kind of cooperation and collaboration goes on every day in this country, and at some level, we all know this. We see it. Yet we ignore it in favor of popular negative narratives that are slowly but surely poisoning public morale.

Oh, it's true that the occasional heartwarming story -- like this one -- wends its way across cyberspace and captures people's attention for a fleeting instant. But then the national conversation drifts back to the comfortable familiarity of resentment, anger and hatred.

Academia is a source of some of the worst pollution when it comes to "honest" conversations about ethnicity, race, religion, culture, and every other conceivable human difference. For academics, it seems that "honesty" means coming up with infinitely new ways to rub old wounds raw, and extract "mea culpas" from current generations for past wrongs.

The "publish or perish" stricture and desperate clamor for tenure contributes to this in no small part: Gotta come up with a new theory. The more controversial the better. Controversy gets attention. And attention gets citations. This is exacerbated by the "ivory tower" ambience of academia, which insulates academics from the consequences of their pet theories, while the rest of the world deals with the aftermath.

At present, the hot theory is "privilege," which seeks to diminish the accomplishments of individuals who -- by virtue of circumstances beyond their control (they are white, or Christian, or straight, or male, or not disabled, or middle class or born to two married parents) -- are informed that they should acknowledge the unfair advantage they have received. This argument could be pursued back through history ad infinitum: Countless members of the existing human population also benefitted from the ancient Egyptians' use of slaves to build their magnificent architecture, the brutal Roman Empire's reach as far north as Hadrian's wall, and the Mongol Hordes' march across Europe, bringing with them bloodshed and bubonic plague.

This isn't "honesty"; it is grievance-mongering. It is ideological poison. It is turning us against each other and making us sick.

The flood rescue video is a glimpse of real honesty and real hope.

Focusing on the positive interactions between us all doesn't deny the truth or negate the existence of hostilities or hatreds -- past or present. But choosing to focus on the good in each other elevates and inspires us and those around us. If we spend all our time talking about nothing but hurts inflicted, we keep ourselves constantly agitated. Even more disturbing, we make our young people angry, embittered, resentful, mistrustful and aggressive.

If we raise the level of conversation by pointing out kindness and love, supporters, achievers, advocates, those who have overcome adversity and those who defied stereotypes, then we fill our hearts and those of the next generation with hope.

It will change your life.