Laura Hollis
|
Posted: Feb 11, 2016 12:01 AM
Share   Tweet
The opinions expressed by columnists are their own and do not necessarily represent the views of Townhall.com. 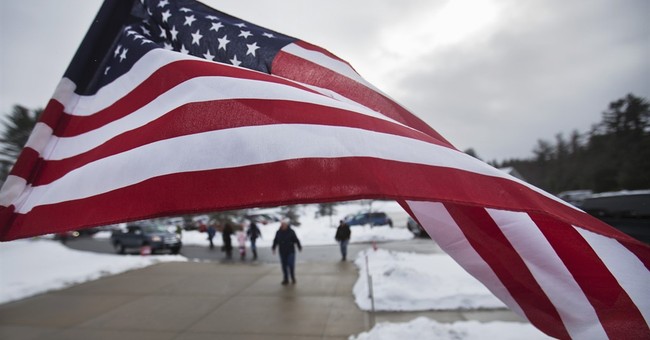 Within the past couple of weeks, a news item has been circulating describing the decision of Scott Masini, principal of Bruce Vento Elementary School in St. Paul, Minnesota, to cancel the celebrations of Halloween, Thanksgiving, Christmas and Valentine's Day during the school year.

Masini's purported argument is that these holidays reflect the "dominant culture" of the United States, and are therefore "threatening the culture of tolerance and respect for all."

This is completely asinine. But it reflects a worldview of a small -- yet increasingly vocal -- group in the United States who seem to be arguing that the only culture whose principles, values, history, and traditions don't count is the dominant culture in the United States.

The United States does have a dominant culture. Ethnically, it was originally Anglo-European -- although we draw from a much broader spectrum of the globe now. Our laws and legal systems draw heavily from Great Britain. In matters of political philosophy, ancient Greece and Rome were primary influences. And in terms of religious belief, America is a predominantly Christian country, with its values and foundational documents firmly grounded in Judeo-Christian principles.

But this defense was weak for two reasons. First, Obama went on to say that the U.S. is "a Jewish nation, a Muslim nation, a Buddhist nation, a Hindu nation..." That is simply not true. It is true that the United States is a nation in which Jews and Muslims and Buddhists and Hindus live and work. The tenets of those faiths, to the extent that they are not incompatible with America's laws, values, and traditions, are free to be practiced by their adherents. But the U.S. is not, under any reasonable interpretation of the words, a "Muslim nation" or a "Buddhist nation."

Second, even the arguably more accurate statement in Obama's 2006 speech is classic Obama straw man: "Whatever we once were, we are no longer just a Christian nation." The clear implication here is that we were once a country of only Christians. But that was never true. From our founding, we had people of other faiths (or none).

Under the most conservative estimates, 70 percent of Americans self-identify as Christians. Equally important, however, we are a nation founded on Christian values. Those values are incorporated into the foundational documents of our country, most notably in the Declaration of Independence, which states that that all human beings have rights that come not from government, but from our "Creator," including "life, liberty and the pursuit of happiness."

The argument that America's "dominant culture" is oppressive to those from other cultures is unmitigated garbage. It is the dominant culture that permits those from other cultures to flourish here. Jews, for example, represent less than 3 percent of America's total population. The dominance of Christian culture has not stopped Jewish Americans from becoming successful and productive citizens, from building temples, Hebrew day schools and Jewish community centers, or celebrating Jewish holidays like Rosh Hashanah, Yom Kippur and Hanukkah. (In some cities with a large Jewish population, Jewish high holy days are recognized holidays in the public calendar.) It has never been necessary that Christians cease celebrating the holidays that are part and parcel of our tradition in order for Jews to flourish here, nor have Jews demanded it.

Thus, assimilation is simultaneously accompanied by the preservation of distinct cultural and ethnic practices. This is not unique to American Jews by any means. Virtually every ethnic group which has emigrated to the United States in significant number has not only preserved certain beloved traditions -- including music, food, and holidays -- but has shared them with others. This occurs with such regularity that we scarcely notice it. We take it for granted that any American town will have Chinese, Italian, Japanese and Mexican restaurants. Larger cities will have German, Lebanese, Korean, Indian, Thai, Vietnamese, Ethiopian, Brazilian, and many others. Not only are foods popular, but a great many festivals and holidays tied to specific ethnicities have become widely celebrated in the U.S.: St. Patrick's Day, Paczki Day, Oktoberfest, Cinco de Mayo, Chinese New Year. Asian martial arts have developed broad cross-cultural appeal, as have Buddhist spirituality and meditation, and Hindu yoga practices. Music and literature from every country and region imaginable is available here.

No country and no culture is perfect. But America's "dominant culture" is remarkable in its own right. And it is what has made this kind of cultural exchange possible. Those who value it must fight for it.