Post-Debate Questions for the Democrat Candidates 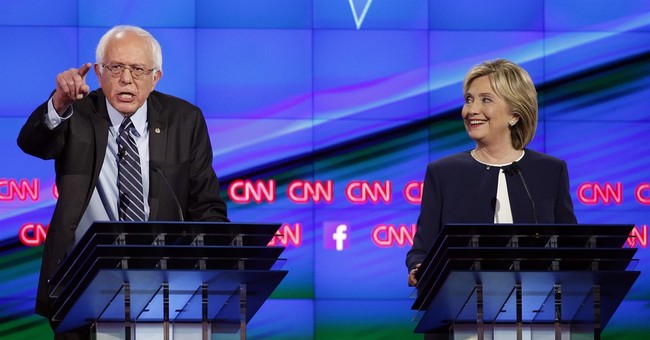 There are so many responses one might have to the fallacies and fictions spouted at Tuesday evening's first debate between the Democrat candidates for president, and so many questions that need to be asked after the debate. Here are just a few areas that need clarification.

1) Define "wealthy." Go on -- let's hear what that really means. Because the way Democrats throw that term around, it's never clear to whom they are referring. Decrying "tax cuts for the wealthy" and calling for "tax cuts for the middle class" doesn't mean much when nearly 50 percent of Americans pay no income taxes at all.

3) Define "opportunities for the middle class." This is one of the biggest whoppers for the Democrat Party. (And there are so many.) They love to bemoan the shrinking middle class, but refuse to look at the realities behind it and their roles in it. Hillary Clinton bragged about how the United States had built the biggest middle class in the world. Interesting story, that -- where did those job opportunities come from? Manufacturing. Construction. How is the Democrat Party on manufacturing? Construction? Coal and oil extraction?

4) Do you care about "global poverty," or don't you? The Democrats love to tell us that in a "global economy" we have an obligation to those around the world who are less fortunate. (This is one of their favorite justifications for "doing something about 'climate change.'") But when companies move factories, plants or call centers to those impoverished locations, Democrats wail that this is destroying the American middle class. Bernie Sanders is more consistent than most in opposing trade deals that he argues hurt American workers. But most Democrats refuse to admit that there is even a trade-off between raising the global standard of living, and American jobs and wages. Hillary Clinton certainly doesn't.

5) Do you even understand business? This is a rhetorical question, and the answer is clearly "no." From start to finish, virtually every position the Democrats take makes it evident that "business" is nothing but a whipping boy for them. Democrats say "business" as if it is synonymous with "big business." But most businesses in the United States are sole proprietorships. Of those companies that are incorporated, the overwhelming majority (80 percent-plus) are closely held and family-owned. What this means is that any policy that hurts business hurts employment. Democrats love to rail against "Wall Street." But it isn't "Wall Street" who will be hurt by the oppressive regulations and increased taxes Democrats propose -- it will be other businesses that hire the majority of Americans.

6) So how do you plan to "put money into jobs"? I'm not even sure what this turn of phrase means. Government doesn't create jobs (not even "shovel-ready" jobs, as it turns out); business creates jobs. Government takes money from people and companies that do create jobs, and then gives it to people who donate money to campaigns. That's not the same thing as "putting money into jobs."

7) What do you make of the increasingly vocal scientists who question the politicized conclusions about anthropogenic "climate change"? The Democrat debate (like all political debates) was a meme-fest. One of the most popular ones is "97 percent of scientists agree" that climate change is taking place, or "the science is settled." Except when it isn't. Climate change isn't being pitched as science; it's being pitched as religion: Proclaim your loyalty or be excommunicated as a heretic. It's very simple, really: if you're wrong about the results of your theory then you probably have to revisit your theory. And some of us are old enough to remember when the predictions were that the world was going to ice over, or that massive numbers would die of starvation from population explosion. ...Still waiting.

9) Free tuition for everyone? Who's guilty of voodoo economics now? Studies have recently demonstrated what logic already suggested: Federal student loans gave universities carte blanche to ratchet up tuition, with the result that tuition increases have outpaced inflation many times over. That's why student loan debt is over $1 trillion. And the Democrats' answer is "Let's make it free!" Oh, and free to illegal immigrants, as well. Since there was no discussion of securing the border, this means free to anyone on the planet who can get here?

10) Finally, not a single one of you has the courage to say, in a country of over 300 million people, that "all lives matter"? (Why does it actually even require courage to say that all lives matter?) If you can't tell every single American that his or her life matters, then you don't deserve to be the president of the United States. Period. Buying into the notion that saying "all lives matter" is the same thing as saying that some lives don't means you can't tell the difference between propaganda and policy.

But then, we already knew that.