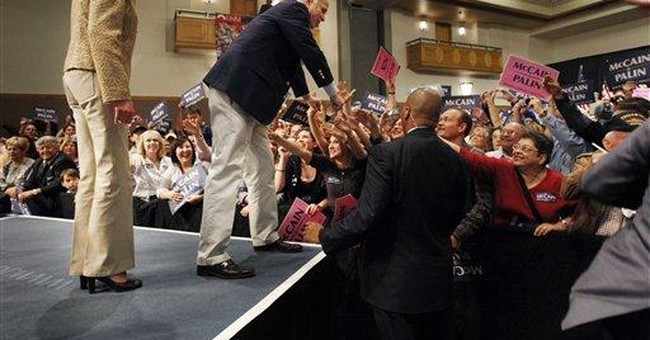 I thought I’d seen everything with Bob Dole’s blundering “I-deserve-to-be-elected-because-it’s-my-turn” schtick in 1996.  He had no message.  There were literally dozens of things that could have been used in opposition to then-incumbent President Bill Clinton (not the least of which were Hillary’s failed putsch of medical care, the beginning of what would be an eight-year string of scandals, and the public’s throw-the-bums-out sentiment in the 1994 Congressional elections that gave the Republicans control of Congress for the first time in decades).

It didn’t matter.  Dole used none of these.  His timing was off from the get-go.  He never mustered any momentum – much less enthusiasm – among conservatives, and he was trounced in November.

McCain’s “strategies” (if you can call them that) and his timing are starting to feel eerily familiar.  He seems to have no sense of the public’s sentiment.  This is either a failure of his advisors, or it is his own impenetrability.  Either way, it is hurting him badly.

Second example: as the financial markets were in meltdown two weeks ago, McCain announced that he was “suspending his campaign” to go to Washington and deal with the crisis.  Even supporters found themselves wondering, huh?  First of all, no one expected the bailout talks to last more than a few days.  Was attending to the business of governance for a day or two or three really a “suspension” of his campaign?  Instead of lending gravitas, it just made McCain look silly – particularly when his campaign was “unsuspended” just a day or two later.  It also allowed Obama to score points with his pithy observation that a president should be able to do more than one thing at a time.

Now – and this failure is the most critical of all – McCain appears to be allowing Obama and the Democrats to spread their false and propagandistic version of what caused the banking collapse, utterly uncontested.  Instead of telling the public the truth about how two Democratic Presidents and Democrats in Congress manipulated the financial markets, threatened lenders, allowed Fannie Mae and Freddie Mac to plunder securities, and ignored warnings of impending collapse; instead of hammering home the inexplicable conflicts of interest between Congressman Barney Frank’s position as Chairman of the House Financial Services Committee and his lover’s position at Fannie Mae; instead of showing the hypocrisy of Obama’s receipt of the second-largest campaign contributions from Fannie Mae – McCain has now decided that the public should reconsider Obama’s affiliations with the Reverend Jeremiah (“God damn America”) Wright and unrepentant bomber and domestic terrorist William (“I’d do it all again”) Ayers – issues that were in the news months ago.

And once again, McCain’s and Palin’s supporters are left scratching their heads.  And writing their articles and blogs.  And hosting their radio and television shows.  Watching the McCain campaign flounder, and reading and listening to conservative media, reminds me of being at a pee-wee football game, where a confused youngster has, to his own amazement, gotten the ball, and is now headed the wrong way down the field, while well-meaning parents are pointing and hollering, “It’s that way!  The goal is that way!”

While I agree that Obama’s associations are profoundly disturbing, and tell us plenty about his world view and what his goals for government are, the fact is that the public is fixated on the economy at the moment.

It would be one thing if there were no story for McCain to tell.  But there is.  And McCain and Palin need to tell this narrative to the public.  I have personally had conversations with any number of friends and colleagues who were stunned and appalled when confronted with the role of Democratic congressmen in the banking collapse.  The National Republican Congressional Committee has a powerful ad that shows the Dems in deep denial.  The very same Democrats who are now blaming the Bush administration, while clamoring for even more control over our markets, our financial institutions, our businesses.  The truth of these messages can convert people wavering on the issue of the economy, and perhaps leaning towards Obama’s seductive siren song of comforting government control.

Why isn’t Team McCain moving the ball down the field on this one?  It’s a simple message:  These guys have screwed up enough!  Don’t take our word for it - we’ve got it on tape.  They’ve already cost us $850 billion.  Why on earth would you put them in charge of anything else?

As with so many other issues, the narrative on the economy favors McCain and Palin.  Now if they’d only tell it.  It’s that way, John and Sarah.  The goal is that way.