Larry Provost
|
Posted: Feb 23, 2021 12:01 AM
Share   Tweet
The opinions expressed by columnists are their own and do not necessarily represent the views of Townhall.com. 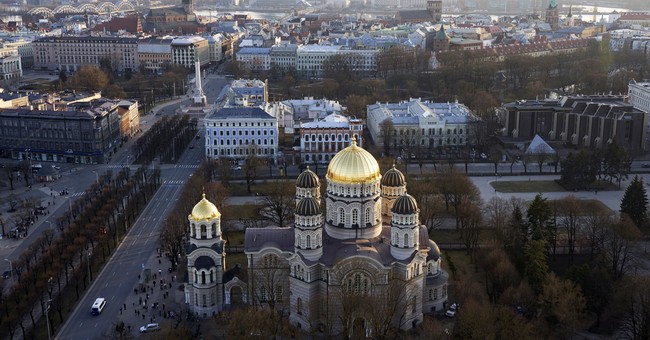 Throughout this month, Latvia has suspended up to seventeen Russian television channels that have been an aggressive and subversive force within the Baltic nation.

Earlier this month, a Russian channel named Rossija RTR was banned from Latvia by that nation’s National Electronic Mass Media Council (NEPLP). The NEPLP reasons given for that action were that Rossija RTR had engaged in “incitement to hatred or discrimination against a person or group of persons on grounds of sex, race or ethnic origin. To summon to war or to cause military conflict on grounds of origin, nationality, religion or belief, disability, age or other circumstances.”

Since summer 2020, Rossija RTR has called Ukraine a “terrorist country” and engaged in several instances of calling for war against the Baltic States, among other provocations.

A day after the Rossija RTR ban, a further sixteen Russian channels were removed from Latvian programming for failure to comply with periodic registration requirements that all commercial broadcasts in Latvia are subject to.

While the content of these channels are seen from a variety of outlets other than traditional television mediums, these suspensions nevertheless represent the most recent public step by the Latvian government to stand against the aggressive impulses of Russian President Vladimir Putin. The controversy over media and journalism has been a focal point of these aggressions. Shortly before Christmas 2020, Latvia’s Ministry of Foreign Affairs issued a bulletin, directly targeting the Russian government, stating:

“A state that cannot control its own security services or, in the best traditions of the Stalinist era, uses them to eliminate its political opponents and suppress civil freedoms has neither moral nor the political or legal right to comment on domestic processes of democratic states. Besides, Russia also imposes restrictions on the freedom of its civil society on a regular basis by banning and censoring the media and the internet. The increasing crackdown on other public activists and human rights defenders as well as communications with this kind of content do not contribute to the improvement of either the situation in Russia, or Russia’s image internationally.”

Thirty years after its reaffirmation of independence against the U.S.S.R, Latvia is not backing down from the continued provocations of the Russian government but is actively pushing back against them and not just through the communications airwaves.

Latvia continues to assert its independence while concurrently forging greater ties with its NATO allies. In recent years the United States, Canada, and other NATO nations have held training exercises in the Baltic States and in 2018 Latvia met the NATO spending goal of 2% of its GDP on defense. That same year education reforms were proposed and subsequently adopted reasserting Latvian as the primary language of instruction, with certain subjects exempted, in schools predominated by ethnic minorities in Latvia. This move largely effects the nearly one-quarter of people in Latvia who use Russian as their first language.

While Russia is extremely larger than Latvia in terms of population and territory, as well as having extensive military and cyber capability, the response of the Baltic nation has been one of increasing assertiveness against Russia’s human rights abuses and calls attention to its past resistance against the Soviet empire; a post-World War II resistance that lasted longer than any other movement of that era against the Soviet Union.

Current trends, and the policies stemming from them by its government, indicate that Latvia will continue to push back against the aggressive impulses of the Russian government in the years ahead.

*Views expressed in this article are those of the author and not any military or government agency.