75: Years Ago: The Allied Betrayal of Czechoslovakia

Larry Provost
|
Posted: May 07, 2020 12:01 AM
Share   Tweet
The opinions expressed by columnists are their own and do not necessarily represent the views of Townhall.com. 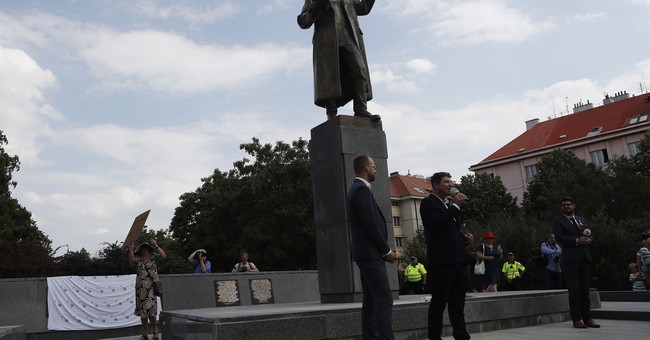 Seventy five years ago today, the citizens of Prague, Czechoslovakia broadcast appeals for help to the Western Allies.  These appeals were ignored.

In mid-April 1945, General William Simpson’s Ninth United States Army paused on the Elbe River and was ordered not to attack the Reich capital of Berlin.  The still advancing forces of the American Army consisted mainly of General Patton’s Third Army which were geared towards Bavaria, Austria, and Czechoslovakia, not supporting Simpson in a possible assault on Berlin.  This was for several reasons.  The first was that Berlin was well within the Soviet Zone of occupation and Supreme Allied Commander General Eisenhower believed there was no sense in wasting American lives for territory that would have to be given back to the Russians.  Ike expected casualties to be up to 100,000.  Also, there was no clear line of demarcation and if both the American and Russian armies had entered Berlin, the very shooting war that Hitler wanted between the Americans and the Russians would have been more likely to happen.  Additionally, there may have been a concern of saving American troops for future operations against Japan. Lastly, there was a belief that German troops were establishing a National Redoubt in Bavaria/Austria/Czechoslovakia and it would be better for American forces to concentrate there, especially with Bavaria being in the pre-determined American zone of occupation.  In some circles, the failure to take Berlin was not a popular decision but was the right one.

However, Prague was not Berlin and Prague is the capital that Allied forces should have taken.

On May 5, 1945, General Patton was ordered by General Bradley to advance into Czechoslovakia to advance to Pilsen and quite possibly further.  Patton moved so fast that the road to taking the lightly defended Prague was open.  Unlike the Soviet assault on Berlin, where Americans were always 50 to 200 miles further way from the capital than the Russians, Prague was much closer to American forces than Soviet forces.  The Czechs in Prague knew of the American advance and rose in open revolt against the German occupiers.  The S.S. moved to suppress the revolt and the Czechs broadcast appeals of help to the American Army.  Patton, knowing of the revolt, asked for permission to continue on to Prague but, after Eisenhower discussed the matter with the Russians, General Patton was ordered to stop.  General Antonov said to Eisenhower, “The Red Army had stopped its advance to the lower Elbe …at the Supreme Commander’s (Eisenhower’s) request.  I hope, General Eisenhower, that you will comply with our wishes relative to the advance of U.S. forces in Czechoslovakia.”  On May 6, Patton was ordered to stop.

Patton’s immediate superior, General Omar Bradley, devoted only two paragraphs in his autobiography to the fate of Czechoslovakia and said that the British (i.e. Churchill’s) concern over the issue was political only.  Further, Bradley said “Prague, like Berlin, had no strategic significance…Patton desperately wanted to liberate Prague, both for political reasons and, I am certain, for the headlines.”  Command Decisions, published by the Department of the Army’s Office of the Chief of Military History in 1960, supported the decision of General Eisenhower.

Bradley served an important role in balancing Patton but General Bradley also became bitter in his elder years and never lost an opportunity to disparage Patton.  Further, Bradley denigrated that the political views of men such as Churchill and Patton; casting cynicism on them in believing their political views were nothing more than desires for prestige and power. History shows Bradley and Eisenhower were wrong and that Patton and Churchill were correct.

At least 10,000 civilians died in Prague and the American reputation in Czechoslovakia was tainted by the failure to take the capital.  Instead of General Patton’s Third Army taking Prague and saving many of the civilians, and giving Western values a greater relevance in Czechoslovakia, the Soviet Union ended up taking Prague on May 9, one day after the War in Europe officially came to an end.

General Patton said, “I felt, and still feel, that we should have gone on to the Moldau River, and if the Russians didn’t like it, let them go to hell.”  The Moldau River, today called the Vltava River, presented a natural line of demarcation between American and Russian forces.  Further, when American and Soviet forces did meet up in Czechoslovakia, there was no shooting.

Also, Czechoslovakia was not to be split into occupation zones as was Germany or even Austria.  It was open for the taking and no territory would had to have been given back to the Russians.  If anything, the occupation by American forces of the Czech capital would have had a much more positive post war development than Soviet occupation.  This was not the first time the Czechs were let down by the Allies, with the first being the Munich agreement.  Without American occupation forces in the country, instead only the evils of communism held real force in Czechoslovakia. Finally, the humanitarian issues of our Czech allies rising up should have negated any previous agreement with the Russians.  Instead Allied leadership let the Czechs down by failing to advance, something that the Russians did to Poles in Warsaw the year before.

Patton’s Third Army should have been allowed to take Prague and rescue our Czech allies.