Did Billy Graham's Best Friend Meet Him In Heaven?

Larry Provost
|
Posted: Feb 27, 2018 12:01 AM
Share   Tweet
The opinions expressed by columnists are their own and do not necessarily represent the views of Townhall.com. 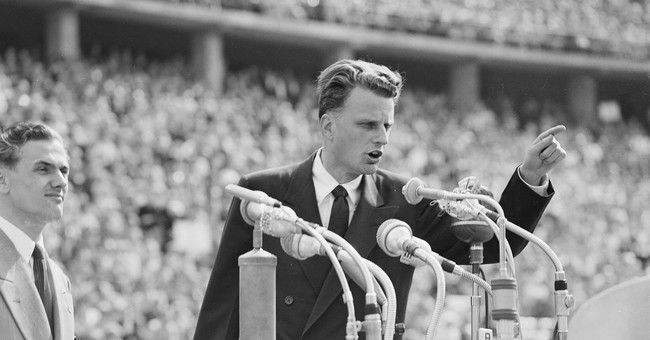 Charles Templeton was from Canada and was co-founder of the organization Youth for Christ, which hired Billy Graham as its first full time evangelist.  Templeton and Graham led rallies together in America and in Europe.  Many thought that Templeton was the more talented preacher of the two.  However, what followed was a truly sad story.

By the late 1940’s Templeton began to doubt the Genesis account of creation.  Further, he had doubts about the concept of hell and why a loving God would allow suffering in the world.  Finally, he had trouble accepting the deity of Jesus. After attending the liberal Princeton Theological Seminary, Templeton left the ministry and Christianity. He was divorced a couple of times and entered politics, almost becoming the leader of the Ontario Liberal Party, and journalism.  In 1996, he published a book entitled Farewell to God.  It was around this time Templeton was diagnosed with Alzheimer’s disease.

After the publication of Farewell to God Lee Strobel, a former atheist and attorney turned Christian author, interviewed Templeton for his book The Case for Faith.  Strobel asked Templeton about his objections to Christianity.  During most of the interview, Templeton was adamant and forceful despite his creeping illness.  Yet Strobel wrote that when he asked Templeton his thoughts about Jesus:

“Templeton’s body language softened. It was as if he suddenly felt relaxed and comfortable in talking about an old and dear friend. His voice, which at times had displayed such a sharp and insistent edge, now took on a melancholy and reflective tone. His guard seemingly down, he spoke in an unhurried pace, almost nostalgically, carefully choosing his words as he talked about Jesus.

“He was,” Templeton began, “the greatest human being who has ever lived. He was a moral genius. His ethical sense was unique. He was the intrinsically wisest person that I’ve ever encountered in my life or in my readings. His commitment was total and led to his own death, much to the detriment of the world. What could one say about him except that this was a form of greatness?”

I was taken aback. “You sound like you really care about him,” I said.

“And tough! Just look at Jesus. He castigated people. He was angry. People don’t think of him that way, but they don’t read the Bible. He had a righteous anger. He cared for the oppressed and exploited. There’s no question that he had the highest moral standard, the least duplicity, the greatest compassion, of any human being in history.

With that tears flooded his eyes. He turned his head and looked downward, raising his left hand to shield his face from me. His shoulders bobbed as he wept. . . .

Templeton fought to compose himself. I could tell it wasn’t like him to lose control in front of a stranger. He sighed deeply and wiped away a tear. After a few more awkward moments, he waved his hand dismissively. Finally, quietly but adamantly, he insisted: “Enough of that.”

As a person Templeton was very likeable, had a great intellectual curiosity and searched for truth.  He said he could not be a liar and preach something he did not believe.  That is respectable.  After reading The Case for Faith it was apparent that Strobel liked Templeton very much too.  The Strobel interview appeared to be the end of Templeton’s encounters with Jesus.  But he may have had one more encounter with God shortly before his death.

Beverly Ivany of the Salvation Army had read Farewell to God and was, ironically, strengthened in her faith after reading Templeton’s book and became friends with him before his death in 2001.  Ivany wrote that Templeton’s last words, as reported by Templeton’s wife Madeleine, were “Madeleine, do you see them?  Do you hear them?  The angels!  They’re calling my name.  I’m going home!”

Only the Lord knows what happened to Charles Templeton.  Maybe, just maybe, Billy’s best friend repented and returned to his Jesus after all and, in doing so, was able to greet his friend Billy as he entered Heaven to meet the Jesus they loved and adored.