The Silent Majority Won't Be So Silent Come November

Larry O'Connor
|
Posted: Jul 24, 2020 12:25 PM
Share   Tweet
The opinions expressed by columnists are their own and do not necessarily represent the views of Townhall.com. 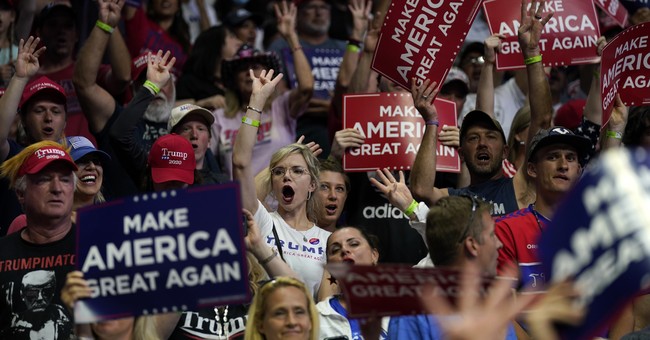 A stunning new poll from the Cato Institute shows 62% of Americans are afraid to openly share their political beliefs with a whopping 77% of Republicans fearing some sort of backlash for being "outed" as a Trump-supporting conservative.

No one who has been paying attention to our society should be shocked by this.

From Fox News' Tucker Carlson nearly getting doxxed by The New York Times to New Orleans Saints quarterback Drew Brees being ostracized by the same sports league he helped enrich to a teacher in Michigan getting fired for saying Donald Trump is our president (which, last time I checked was an undeniable fact) publicly expressing any opinion that goes against the authors of The 1619 Project or the most extreme sexual deviance of Hollywood's radical left endangers one's privacy, career, and even physical well-being.

The culture that has been fostered and empowered by intersectional academic elites protected by tenure at well-endowed (and government-funded) universities as well as the arbiters of acceptable behavior who sit behind plexiglass desks in cable news studios high above the streets of Manhattan, the lessons have been carefully and painfully taught to all Americans. If you're not in-line with the woke minority with the loudest voices, better stay quiet if you know what's good for you.

One question from the Cato poll is most relevant to the lesson we've all had to learn:  "Would you support or oppose firing a business executive from their job if it became known that they privately donated money to Republican Donald Trump's re-election campaign for president?"

Forty-two percent of Democrats and 50% of liberals answered "Yes."

With a liberal in America, you've got a 50/50 shot of being fired if it's discovered you donated to the re-election of the president of the United States. A coin-flip. Who wants to take those chances?

They'll destroy anyone in their way. And they'll even lie to do it.

They attacked a 16-year-old boy whose only sin was to wear a MAGA hat while attending a march to protect unborn babies. But, that was enough for the inquisition to condemn him. If they could lie to destroy his life, you think they'll hesitate to use your comment on a Facebook post to destroy yours?

Of course, they will. It's what they do. And they think it's how they will win.

At least, for now, they're wrong.

We just need to vote.

We just need to keep our heads down, smile as they scream and rant, and try to burn down their own failed Democrat-run cities, and vote.

We don't need to constantly argue for funding our cops; we just need to elect representatives who are paid to make that argument for us.

We don't need to rail against Nancy Pelosi's lies and corruption; we just need to elect enough Republicans to Congress to de-fang and humiliate her once and for all.

We don't need to convince anyone about the dangers of a Biden administration populated by Bernie Sanders, Elizabeth Warren, Kamala Harris, and Ilhan Omar; we just need to re-elect Donald Trump, who is not afraid to make these arguments for us.

He is unafraid. He's been there. They call him "Hitler" on a regular basis and he keeps fighting. Let him. Let him fight on your behalf as long as you are there for him in November.

Just know that there's nothing wrong with you for wanting your freedoms. You're not at fault for cherishing your First Amendment rights to the unencumbered practice of your faith and uninfringed expression of your political beliefs. There's nothing "intolerant" about wanting to protect yourself, your family, and your property from criminals who wish to steal or destroy what you've earned.

There's nothing wrong with you for wanting to enjoy a baseball game or a movie or a late-night television talk show without your politics and beliefs targeted for mockery and disdain.

You are not the problem.

They should be embarrassed to voice their un-American, destructive ideologies in a country that only allows it due to the sacrifice of brave men and women like you who fought for these lunatics' right to scream in the streets in the first place.

But this is the world we live in today. Be proud that you are in the silent 77% of this country who believe in the founding principles and values of this great nation but are too intimidated to speak that truth out loud. Own it. And show up in November.

The mob is not winning by keeping you silent and resolved.

The mob only wins if they actually win.