Optimism Reigned in Trump’s First Address to Congress As Did Civility, Leadership, Unity, and Facts

Larry Kudlow
|
Posted: Mar 02, 2017 12:01 AM
Share   Tweet
The opinions expressed by columnists are their own and do not necessarily represent the views of Townhall.com. 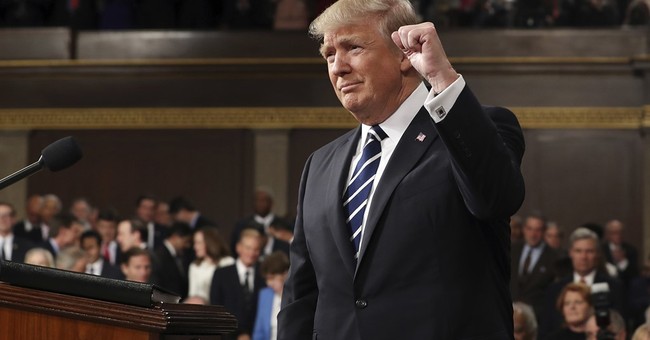 The mark of great presidents is optimism -- visionary optimism and transformational optimism. During Tuesday night’s remarkable speech before Congress, Donald Trump was brimming with optimism, from start to end. My guess is that his marvelous speech will imbue and inspire new optimism and confidence throughout the entire country.

Stock markets surged over 300 points the day after the speech, and I’ll bet the president’s approval ratings jump over 20 points.

There are so many Trump cynics and critics who watched this event and hoped for a train-wreck, shock-value disaster. Whoops. It didn’t happen. They completely misjudged Mr. Trump.

He wasn’t angry. He didn’t lash out. His voice was calm and modulated. And he was incredibly effective.

In fact, he was riveting. You couldn’t take your eyes off him. You couldn’t even take a bathroom break. You didn’t want to miss a word.

President’s Trump’s speech was infused with civility, which is something we all hoped for as an alternative to the coarseness of American politics (and the rest of the culture, for that matter).

He made fact-based arguments on the economy, health care, education, immigration, national security, and public safety. And he did so respectfully. He attempted to persuade, and it was wonderful to watch.

And time and again, he reached across the aisle to the Democrats. This was a unity speech, not a partisan one. The president asked for common ground and common good. He was saying: Let’s work together to solve all these problems that have troubled us for so many years.

I have no idea how the Democrats will respond. But poll after poll has shown that the country yearns for bipartisanship rather than the flame-throwing, name-calling political contentiousness that has governed Washington and the campaign trail for so long.

All the Trump campaign themes were there. He intends to keep his promises. I thought he was especially convincing on merit-based immigration. And he set out the principles of health-care reform, education choice, and law and order everywhere -- especially in the big inner cities where poverty has ruled alongside violence in a downward spiral that seems impossible to fix.

In recent days, the president has spoken to various business groups about 3 percent-plus growth, which would generate far more revenues and far fewer deficits than conventional, pessimistic economists argue. During the speech before Congress, the president stuck to his guns on both economic growth and tax reform.

On foreign affairs, he pledged to stay with NATO, but he reminded everyone that his job is to protect the interests of the United States first and foremost.

On trade, his message was more ambiguous. Outright protectionism was muted, but the threat hangs in the air. The divisive border-adjustment tax looks to be part of a White House-GOP congressional deal, which is unfortunate. But let’s wait on that to see the full story.

There’s also the threat of a new GOP entitlement in the form of refundable tax credits. But let’s wait on that as well, until the budget details are released.

Of course, there was the heartbreaking salute to Carryn Owens, the widow of U.S. Navy SEAL William “Ryan” Owens. It was followed by long, thunderous applause. It was an incredible and unforgettable moment.

And then the president concluded.

“We want peace, wherever peace can be found,” he said.

“Hopefully, the 250th year for America will see a world that is more peaceful, more just, and more free,” he added.

He pointed to Bell’s telephone, Edison’s telegraph, and Remington’s typewriter, suggesting that working together we can empower our aspirations and put aside our fears.

“But we can only get there together,” he said. “We are one people, with one destiny. We all bleed the same blood. We all salute the same flag. And we are all made by the same God.”

That is optimism. That is leadership. And that is greatness. Mr. Trump’s allies and doubters will now sleep better and with a little more hope than many of them will dare to admit.

Speeches like this can change history. Do not underestimate this president. Like tens of millions, I’m sure -- I’m proud of him.