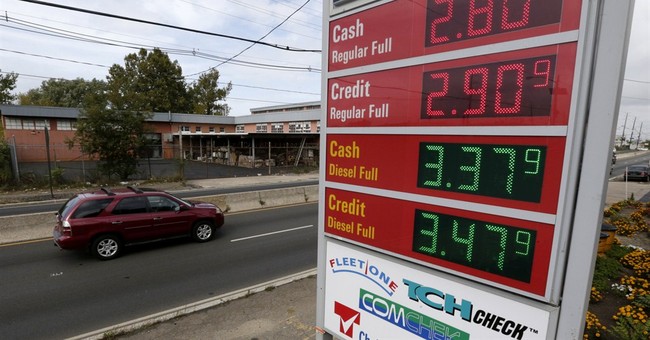 Steep stock market corrections often create shrouds of pessimism that do bad things to people’s brainpower. And one of the absolutely stupidest things I have heard in recent weeks is that the recent drop in oil prices is bad. You heard me right. Serious people on financial television are saying lower oil prices are a signal of worldwide economic collapse. Here at home that translates to recession, deflation, a profits collapse, and rising unemployment.

I’ve been around for a while, and I’ve seldom heard such gibberish.

The latest stock market scare stems from a bunch of fears, like the possible spread of Ebola, economic slowdowns in Europe and Asia, and deflation worries. And when the stock market decides to correct, any reason will do. We must respect the wisdom of the market.

But the recent $20 drop in crude oil is an unambiguous good thing for the American and world economies. Unambiguous.

As I understand the lower-oil-prices-are-bad argument, the shift from roughly $100 to $80 a barrel will somehow close down the American energy revolution and destroy all the new jobs and related infrastructure services that have fueled our recovery.

Nonsense. I spoke with a CEO who is literally at the cutting edge of the horizontal-drilling and hydraulic-fracturing revolution about the so-called “profit break-even point,” or the marginal cost of producing the next barrel of oil. He told me it averages between $50 and $60 a barrel. And a new report from Citigroup energy analyst Edwin Morse argues that oil has to fall to $50 or less to fully halt shale-production growth.

But $80 is not $50. The economy won’t be destroyed. Plus, even $80 per barrel does great economic harm to our enemies Russia and Iran. A good thing.

Of course the fracking revolution has created new jobs. But not nearly as many as some think. Delving into data from the Bureau of Labor Statistics (BLS), during the jobs recovery of the last four years, employment growth in “oil and gas extraction” and “support activities for oil and gas operations” has increased by something around 200,000. That’s a good number, but it’s only a small fraction of the roughly 9 million new jobs created since the middle of 2010.

There are energy-related spillover jobs, though they’re tough to calculate. A recent Marcellus shale study suggests the creation of over 45,000 construction jobs. And in places like North Dakota, Texas, and Pennsylvania, the fracking revolution has created high-pay jobs -- say $80,000 for the roustabouts who previously were unemployed. A BLS study shows North Dakota waitresses averaging $37,000 a year.

That’s good news. But my point is, if production slowed in the event prices fall below $50, the American economy won’t collapse.

More important: Virtually all consumers and producers will benefit from lower energy costs. Households could save as much as $100 billion because of today’s lower fuel costs. Business fuel savings will also be substantial. The result is a much more competitive U.S. (despite our high tax rates).

Retail gasoline at the pump is down around $3.15 a gallon from nearly $4 a little while back. Don’t you agree that’s a good thing?

All these factors will increase U.S. economic growth, not reduce it. Basically, the fracking revolution has delivered a powerful and positive supply shock to the economy. It means that more output increases real growth and reduces inflation for any given increase in nominal GDP -- the exact opposite of what we saw in the 1970s.

As a percentage of energy consumption, U.S. energy production has increased from 69 percent in 2005 to 85 percent currently. We’re almost self-sufficient right now. So a related knock-on effect is the significant reduction in energy imports, which is lowering our trade gap, strengthening King Dollar, and increasing our economic growth.

Let me help all those analysts who have lost their minds in this stock correction. We’re witnessing a big outward move of the energy supply curve. By nearly doubling our oil output in recent years, it’s surprising the oil-price break hasn’t come sooner. It has very little to do with falling demand. In fact, the International Energy Agency predicts world energy consumption may only drop two-tenths of 1 percent -- hardly measurable.

Finally, a political message: Falling energy prices are so good for the economy that a new Republican Congress, in its first 90 days, should put a bill on President Obama’s desk authorizing the Keystone Pipeline, opening federal lands to energy development, and ending oil export restrictions. Totally pro-growth.

Let the GOP dare the president to veto it.