Ben Bernanke Is My Kind of Guy 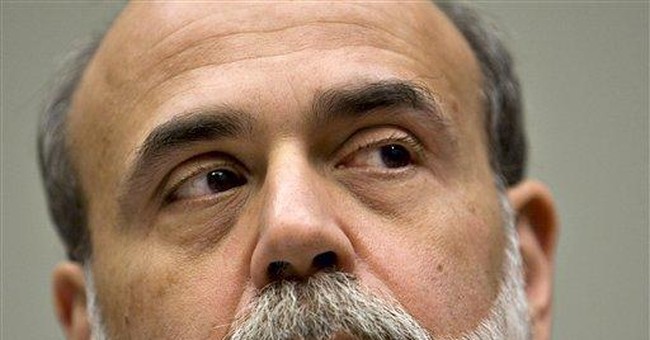 I have really learned to like Ben Bernanke. He’s the man. And his interest-rate cuts are vastly more effective than the so-called economic-stimulus rebate plan coming out of Congress and the White House.

Why do I say this? Simple. I just got my latest adjustable-rate mortgage statement from the bank. When I originally refinanced this loan, it was 5.75 percent. And last summer my ARM soared to 8.25 percent. But guess what? Through February it has round-tripped all the way back to 6 percent.

He’s my kind of guy.

And you know what else? I’m not even getting a tax rebate from Washington. I make too much money.

That’s the message I just got from the IRS. They sent me -- and about 135 million other taxpaying households -- a recent notice. As I thumb down this little letter I learn painfully that taxpayers with adjusted gross incomes of more than $75,000, or more than $150,000 if married and filing jointly, will have their rebate payments reduced or phased-out completely.

I showed this letter to my beautiful bride. We concluded that we’ll be phased-out completely.

By the way, this little IRS letter cost the taxpayers a cool $42 million. That’s right. The administrative expense of this “phased-out completely” IRS note is costing all of us 42 very, very large.

But who cares? Gentle Ben has come through with a wonderful windfall.

Incidentally, those of us whose rebates will be reduced or phased-out completely comprise the top 5 percent of taxpayers and pay 60 percent of all personal income taxes. In total, three-fifths of hard-working Americans will get little or nothing from the famous rebate. Doesn’t hardly seem fair, does it?

But like I said, who cares? The Fed has come through. And not just for upper-income earners, either.

I did some back-of-the-envelope calculating for so-called median-price homeowners. The latest news from the National Association of Realtors is that falling home prices are spurring at least a small increase in home sales. That’s called the free-market. When the price of something falls, we buy more of it. So as existing median home prices dropped again in February (they’re down 14 percent from the peak two years ago), home sales went up slightly, by 2.9 percent. Of course, home sales are still down 30 percent from the peak set in mid-2005. But the market is adjusting. And as it continues to do so, more and more people will purchase homes and realize their great American dream.

So right now the so-called median home price is $196,000, roughly back to 2004 levels. And it’s still about 60 percent higher than ten years ago. (Studies show homeowners generally don’t sell for about a decade, so I use ten years as the comparison.) But here’s where Gentle Ben comes in. A $196,000 home and a 10 percent equity down payment leaves $176,000 to be financed, perhaps with an adjustable-rate mortgage. And since the Fed slashed its target rate and LIBOR rates dropped roughly in sync, the owner of this median-price home is now saving $300 a month compared to last summer, or about $3,600 a year.

That’s a big rebate from the Fed. It’s about three-times bigger than what Uncle Sam is promising. The official IRS notice says the average married couple filing jointly may get $1,200. But Fed head Bernanke is giving median homeowners $2,400 more than that amount. A lot better, right?

Incidentally, all of Bernanke’s emergency machinations to fight the recession in housing and housing-related credit are starting to show very positive effects. Along with various new schemes to backstop the banking system and provide short-term lending help to banks and broker-dealers, many on Wall Street are coming around to the view that something called “systemic risk” is being reduced in the financial world. That includes all those lousy sub-prime securitized mortgages, along with various buyout loans and nasty things like collateralized debt obligations. Sharp-eyed Wall Street analyst Dick Bove puts it quite simply: The worst of the financial crisis may well be behind us.

This, in turn, has caused a big rally in stocks. On top of that, the value of the dollar on foreign-exchange markets is beginning to go up and the price of gold has plunged nearly $100. All this has moved longtime inflation bear Donald Luskin to suggest that the worst of the future-inflation threat may now be over.

So you know what? Let’s give this guy Bernanke a little credit. I think I may make him my new best friend.