The Case for McCain 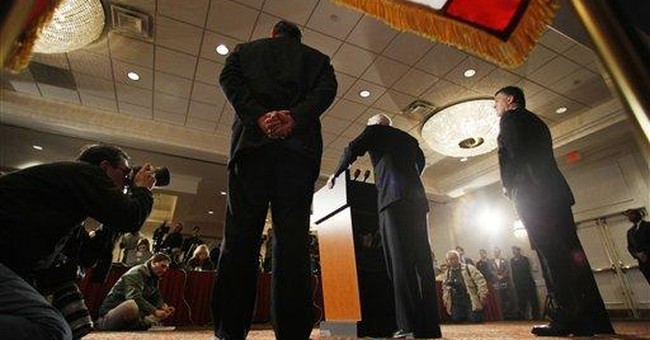 Some things in life are quite simple. Here's one of them: Sen. John McCain is going to be our next president.

For starters, McCain will have a unified Republican Party -- conservatives and all -- working hard for him. He's also going to win over the Reagan Democrats, the Bush Democrats and the Perot independents. These folks demand a strong military, want government off their backs, and are sick and tired of growing federal deficits and out-of-control spending. McCain's their man.

If you recall, it was the cross-over Democrats and independents who helped elect Ronald Reagan twice and put Papa Bush in office for what was expected to be a Reagan third-term. When Papa Bush waffled, they went to Perot. But they came back to support the Gingrich Congress and later stayed with George W. Bush in 2000 and 2004.

In 2006, they walked away again, penalizing a GOP Congress that embraced heavy spending and corrupt earmarks. But now they'll come back. McCain is tailor-made for this group.

Just think of McCain in a debate versus Hillary Clinton or Barack Obama. Remember McCain's zinger about Hillary's $1,000,000 earmark for a Woodstock Hall of Fame museum? He said he didn't know much about Woodstock because he was "tied up at the time." It was a killer line, and we'll hear it again.

McCain is also good news for business and the stock market. He wants to cut the corporate tax and keep dividend and cap-gains tax rates low. He's tough as nails on restraining government spending and blowing up earmarks. On top of all this, he's a very strong free trader who knows America can compete with the rest of the world.

Stock market fears about a new wave of tax hikes should be put aside. It ain't gonna happen after McCain is sworn in. Neither will protectionism. So far as I can tell, high taxes and diminished free trade are the biggest worries for business and stocks. Investors can cast their fears aside.

This also happens to be a good time for the GOP to nominate someone who served bravely and courageously in the military. McCain is much more than a POW who somehow survived the Hanoi Hilton. He is a true military man. It flows through his veins, posing a whopper of a problem for Hillary or Obama. Guaranteed, there will be no chicken-hawk taunts.

And let's not forget that military leaders who know all about war, security and defense are exactly the people who cherish peace the most. When John McCain talks about the global terror war and how to deal with it, and how to protect this country, and how to move toward peace, voters will listen. So will folks around the world. This is all part of McCain's character.

A short while back, I heard former Bush Chief of Staff Andy Card give an engaging talk at an Awakening conference in Sea Island, Ga. Card asked: What's the most important character trait for a successful president? And he answered: the courage to be lonely. In other words, the guts to make tough decisions. Not poll-driven, politically driven or selfish decisions, but decisions made on the basis of what is right and what is wrong, and what is best for America.

McCain is no flip-flopper. Just think about his stance against ethanol subsidies in Iowa and federal hurricane insurance in Florida. (And Florida's Gov. Crist still supported him!) Think of his duty-honor-loyalty persona, to borrow from my friend Kim Strassel of The Wall Street Journal. Duty-honor-loyalty is part of the American military code of conduct. In this most important sense, McCain is a profoundly conservative man. When he makes a promise, he keeps it.

And don't forget his resiliency, consistency and backbone. Here was a man moving around the country, without money and resources. He remained resolute on winning in Iraq, on the surge and on the need to prevail abroad if we are to remain safe at home. Democrats were talking defeat. Republicans were hardly talking at all. But McCain soldiered on. Armed with courage, strength and character, he kept his eyes on the prize. This may be the greatest political comeback in presidential history.

One of the troubles with American politics nowadays is that we don't appreciate our military men and women enough. We don't value their intelligence, their fitness or their values. There was a time in American history -- especially in the 19th century -- when we held the military in great esteem. George Washington, of course, was one of our bravest generals, blessed with uncommon character and strength.

Well, John McCain is a descendant of George Washington and a foot solder in his army. America yearns for exactly that kind of foot soldier. That's why he's gonna win.