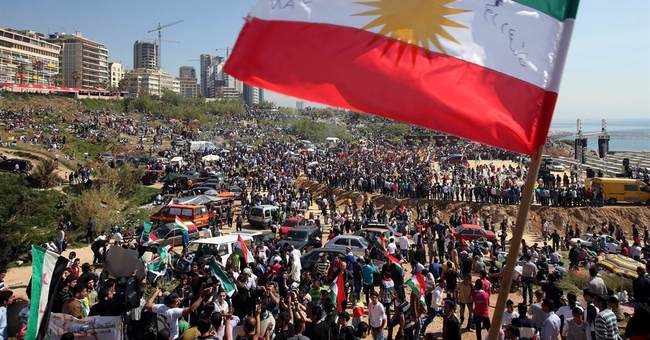 Winton Churchill surveyed the staggering magnitude of worldwide carnage and destruction at the end of World War II and remarked that there was never a war easier to prevent. When Hitler stationed troops in the Rhineland in 1936, in clear violation of the Versailles treaty, the French military alone could have overwhelmed the German Army. But with the horrors of World War I still vividly remembered, the European allies were politically unable to move against Hitler. So they waited and talked. The cost of their inaction was 60 million lives.

In the face of Obama’s endless decrees that the war with militant al Qaeda was over and his underlying fervent belief that the world would be safer with the U.S. in retreat, his dangerous delusions are now wreaking vast carnage in IS- (Islamic State) controlled Syria and all across the Tigris/Euphrates Valley, an area the size of Great Britain. As retired Marine Corps General James Mattis puts it, “No war is over until the enemy says it’s over.”

Despite the grotesque footage of mass executions, beheadings, and crucifixions emanating from what many are calling the new Muslim Caliphate, there are some hopeful signals emanating from the emergence of a free, independent Kurdistan, a new western-friendly Muslim state that can become a beacon of hope for positive change in the extraordinarily troubled Muslim heartland.

News from the Syrian Front

Recently, the focus of the war with IS shifted to Syria, to the Kurdish city of Kobani far away from Iraqi Kurdistan, located on the border next to Turkey. Over the past few weeks, in the tradition of the seventh-century armies of Allah, IS has besieged the city there hoping that its capture would provide it a recruitment boost and demoralize the Kurds who now make up the only effective ground forces confronting it. Due to desperate pleas and western fears that there would be a huge civilian massacre, the U.S. and its allies launched several hundred bombing raids in and around the city. While IS did breach a portion of the city’s defenses and living conditions are desperate, the valiant Kurds still hold most of the city.

More significantly, Turkey’s President Erdogan has now agreed to allow Kurdish reinforcements to transit through Turkey to reach the city. Reports are that they have arrived. This is an important development because a portion of the Kurdish forces fighting IS in Iraq and Syria are members of the PKK, the Kurdistan Workers Party, which has been fighting Turkey for its independence. Over the past three decades, Turkey’s civil war with the Turkish Kurds of the PKK has resulted in 40,000 dead. Both the U.S. and Turkey list it as a terrorist organization.

Like most Islamic heads of state, Erdogan is almost always playing a double game, balancing his Western interests with his desire to curry favor with various jihadist elements inside his country or in his neighborhood. For example, Turkey buys oil from IS which it produces from captured Iraqi oil wells, for less than half its market value, providing the new Islamofascist state with $3 million a day to fund its war effort.

Turkey recently encouraged its businesses to invest in IS occupied Iraq and it allows IS fighters to train and stage attacks on Syria inside Turkey. But perhaps what is more telling, Erdogan has said that his party, the Justice and Development Party, “…is deeply rooted in the Seljuks and Ottomans.” By this he is hinting that he wants to see the Assad regime in Syria fall because, as some astute observers have come to believe, he thinks he can manipulate the rise of IS to gain control of the lands once controlled for 500 years by the Turkish Ottoman Empire and that he seeks to be the sultan of the new Caliphate. By supplying IS and supporting those at war with it, he is playing the ultimate double game.

George Bush once observed that conducting American foreign policy is like playing chess in three dimensions. Nowhere outside of Syria could that observation be more spot on. In Syria there rages a three-sided civil war for control of the country, now waged by three armies, by those of the Assad regime allied with Iran and Russia, by those of IS funded by Qatar and influential figures close to the Saudi Royal family, and Turkey, and by those of the “moderate” FSA (Free Syria Army) of approximately 10,000 rebels which wishes to be funded by the Western powers. The FSA is fighting IS and the Assad regime. IS is also fighting the FSA and the regime. If ever there was ever a foreign war where American interests were unclear, it’s now Syria and its neighborhood. This murderous quagmire also screams a clear admonition to the American electorate—don’t elect a foreign policy novice to be president!

But the Good News Is…

In my book, Lessons from Fallen Civilizations – Can a Bankrupt America Survive the Current Islamic Threat? I record that after the Ottomans lost the battle for Vienna in 1683, European and Russian armies began steadily taking back lands that the armies of Allah had won and held for five centuries. Eventually the lands which form today’s Hungary, the Balkans, Rumania, Bulgaria and Greece would be liberated from Muslim rule. The battle for Vienna, fought on September 11, 1683 would be the turning of the tide. (Muslims know that September 11, 1683 was the high point of Muslim domination over the Christian infidels and that it is the reason bin Laden selected that day for his attack.)

Throughout the three-hundred year decline which culminated in the dissolution of the Ottoman Empire at the end of WWI, the Islamic sages and potentates inside the capital walls of Istanbul continuously grappled with the questions—Why are we losing battle after battle to the infidel? Isn’t Allah on our side? They continuously came back to the same conclusion. The faithful had fallen away from Muslim purity and they simply needed to be more devout Muslims.

IS, Al Qaeda, and Militant Muslims Everywhere Are the New Devout

The Egyptian writer Aly Salem who lives in New York and is an advocate of reforming Islam from within writes, that various polls such as the Pew Research’s 2013 poll, The World’s Muslims, “indicate that in many Muslim countries, the population is overwhelmingly in favor of veiling women, the death penalty for leaving Islam, stoning as punishment for adultery, and where rabid anti-Semitism is rampant.”

Salem also points out that Sayed Qutb, also an Egyptian, in the late 50’s published In the Shadows of the Quran which has become the manifesto of today’s jihadists. His life and writings created ardent disciples of al Qaeda’s Zawahiri and bin Laden. It is not an exaggeration to say that he is to militant Islamism what Marx is to Communism. And just as his eighteenth and nineteenth century Ottoman predecessors, his message is—conquer the infidel with a pure Islamic heart.

While Obama constantly reminds us that the barbarity of IS and the rising stream of lone-wolf attacks inside the West have nothing to do with Islam, Salem counters, “Saudi Arabia (our putative ally) routinely bedheads women for sorcery and witchcraft.”

Enter the Kurds who are fighting for their survival, are allied with the West and even Israel, and deserve to live in a free and independent Kurdistan. If we did not have a president who was blinded by his multiculturist dogma he might realize that we in the West are embroiled in an ideological war with a significant portion of Islam and that no amount of bombing raids can win it. He might therefore go to the podium and champion the valiant all-female Kurdish fighters who are on the front lines of this war. Theirs’ is an example of female liberation and respect that the whole world should applaud and emulate, the president could say. The world has already seen their photos. They fight not wearing veils or burkas but in fatigues and with Kalashnikovs.

Perhaps this president will now see the necessity of waging an ideological war against this barbarous wing of Islam. He could go on to praise Kurdistan for its faithful alliance with the Western powers including its recognition of Israel. He could double down by authoring a new U.S. doctrine which would withhold U.S. aid from any country which did not recognize Israel’s right to exist. And when the Kurds where ready he could offer to the Kurds, conditioned by a vote from Congress, a recognition of their independence. These are things which the developments in Kurdistan offer the U.S. ; a chance to go on offense in the war with militant Islam while at the same time encouraging the much needed Islamic reformation.

Cortney O'Brien
Did You Catch What's Funny About WaPo's Op-Ed About Why It's Tough to be Conservative Right Now?
Matt Vespa