Create a New Kurdistan and Destabilize Iran (Part I) 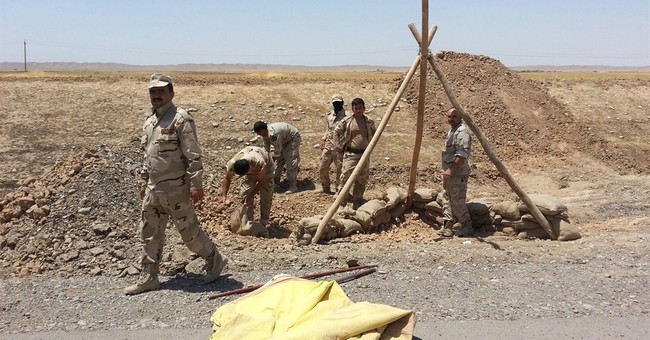 In 627, Mohammad’s earliest biographer, Ibn Ishaq, records that his army held off a twenty-five day siege by Mecca’s ruling tribe, the Quraysh, at his redoubt near Medina. When the prophet learned that the Meccan army included some of the city’s Jews, he ordered the attack of a nearby largely defenseless Jewish settlement and tribe, the Banu Qurayza. While the prophet was overseeing the decapitations, “He caught a glimpse of Rihanna, a beautiful Jewish woman, whose husband and father were beheaded before her eyes just hours earlier. Muhammad asked her to become his wife. She refused. So he took her as his unwilling slave and concubine.

The Horror that is ISIS

As the world is horrified to learn that innocent Iraqis, even little girls, are being beheaded and women are being captured as sexual booty by ISIS, one could easily ask, “What inspires such cruelty?” The answer is—the Prophet, Mohammad. As I explain in my book, Lessons from Fallen Civilizations, every Muslim learns from childhood that there is nothing about the life of the Prophet that can be judged. Rather his is the life by which all others are judged.

ISIS is now a far more brutal and, in every category, a far more capable terrorist organization than was bin Laden’s al Qaeda when it mounted the 9/11 attacks. It controls a land mass the size of New England, has emptied banks, has control of commerce including oil production, has captured American-made sophisticated weaponry including 30 M1 tanks and howitzers, has absorbed Iraqi military leaders including Sunni generals who commanded Baathist troops under Sadam Hussein. It has even gotten control of uranium which could be used to construct “dirty bombs.”

ISIS is also openly threatening to attack the U.S. Its mercurial leader, Abu Bakr al Baghdadi, upon his 2009 release from the prison, Camp Bucca in Iraq, said, “I’ll see you guys in New York City.” What worries defense planners most is the fact that ISIS is not just recruiting wannabe jihadists from all over the Muslim world but from Europe and the U.S also. The nightmare scenario is that hardened ISIS fighters traveling on European and American passports will return to their adoptive countries armed with the ingredients for and the knowledge to detonate crude WMD’s.

Meanwhile America’s Commander in Chief is playing golf and James O’Keefe dressed up as Osama bin Laden walks across the Rio Grande and into the Texas interior without ever even seeing a border control agent. It seems that what needs to happen now is that a coalition of leaders from the Defense Department, Homeland Security, and our intelligence agencies must lay out a concise doomsday scenario which will scare the hell out of Obama, scare him out of his faculty-lounge, capitulationist pacifism. It needs to be delivered in private and in person to the president. Perhaps Joint Chiefs Chairman, Martin Dempsey, would be a good messenger as he has finally begun to speak openly of a strategy to “initially contain, eventually disrupt and finally defeat ISIS over time.”

The advance of ISIS and the chaos engulfing the Iraqi government dramatically showcase this administration’s disastrous foreign policies but strangely offer the U.S. the chance to once again seize the initiative while, at the same time, capture the minds and hearts of significant portion of the Muslim world—the Kurds. The Kurds were the first indigenous population to be attacked with chemical weapons by their own government. Ever since President Bush the Elder installed the no-fly zone over Northern Iraq after the cessation of hostilities in the first Gulf War, the Kurds have been extremely trustworthy and grateful allies of the U.S. (They also have active trade and warm relations with Israel.)

This president and his leftist lap-dog media must first quit this stupid talk of ‘war weariness.” How wearying will it be if we wake up one morning to learn that WMD’s have been simultaneously detonated in numerous American cities? America needs a reliable permanent base in the Middle East for nearly the same reason we still have bases in South Korea. Even if we can gain the collective resolve to defeat ISIS, there will be, for the foreseeable future, unremitting new threats emanating from the region. Therefore, America needs a major military presence in the Middle East because, as we observed in the second Iraq war, it is far better to be battling the jihadists in Fallujah than in New York City. In short, an intelligent approach to national security would dictate that we need to be gathering intelligence on the ground there in the heart of the Middle East, partnering with friendly allies, and have the ability to respond quickly to destroy growing terrorist cells. Good intelligence and overwhelming military capability are what is needed to stamp out terrorism, not passivity and talk.

The rise of ISIS has been a huge distraction from the even bigger threat from resurgent militant Islam—Iran. The theocracy ruling Iran has been at war with U.S. since it overran our embassy in 1979. It is the world’s leading state sponsor of terrorism, is responsible for a great deal of our soldiers’ loss of life in the Iraq war. It was even was a co-conspirator in the 9/11 attacks. Now that Iran has become nuclear-weapons capable state, the regime must be toppled.

For all these reasons, the US must change course and forge an alliance with the Kurds, offering them all military support necessary to defeat ISIS as well as our unconditional recognition of Kurdish statehood when they choose to declare themselves an independent state. Every U.S. president since Jimmy Carter has sought a two-state solution for the Palestinians. Why should we and every other nation who’s sought Palestinian independence over the last fifty years deny the Muslim Kurds their own homeland? We should be wise enough to turn this endless rhetoric around in favor of the Kurdish homeland. In return, we should ask for American military basing rights in Kurdistan and, even more importantly, that the Kurds put the Muslim militants and their western apologists back on their heels by formally decreeing that Israel has the right to exist and that it be free to defend its territory.

In 49 B.C. Julius Caesar and his army, having conquered all of Gaul crossed the Alps and were approaching a small creek, the Rubicon. Based on an ancient Roman law, a general retuning to Italy by this route was to disband his army before crossing into what was considered Italy proper or he was guilty of treason. Caesar had received word that leaders of the corrupt republic in Rome would kill him if he was to return without his army. He was too popular and too powerful. When he crossed the stream, he famously stated, “The die is cast.” Rome would be plunged into civil war and the republic lost.

Over the last few days, Obama has ordered bombing raids against ISIS convoys in and around the City of Irbil and the trapped Yazidis on the Sinjar Mountains. This is war, Mr. President. . You’ve killed ISIS members and their brethren are now more determined to come for you and for us. You must now forget about appeasement. Only total victory is going to gain us safety. The die is cast.