Larry Elder
|
Posted: Jun 25, 2020 12:01 AM
Share   Tweet
The opinions expressed by columnists are their own and do not necessarily represent the views of Townhall.com. 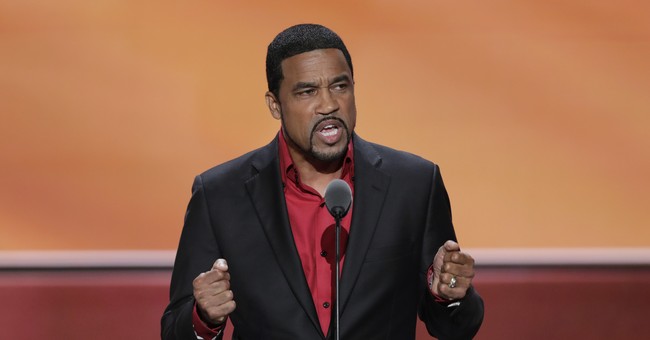 On June 19, also known as Juneteenth, the celebration of the end of slavery in the United States, we released our film, "Uncle Tom." It follows a young, black, Christian contractor, Chad Jackson, who was a long-time Democrat until challenged by a fellow Christian to read the platforms of the Democratic and Republican parties.

Jackson was shocked to discover that his support for limited government, low taxes and school choice, and his opposition to abortion on demand, made him a...Republican!

"Uncle Tom" explores the often-vicious blowback Jackson got from friends and family, let alone others, when he announced his conversion. Instead of Jackson's evolution sparking a healthy discussion about which party's policies better advance the interests of Blacks, Jackson found himself being called "Uncle Tom," a "sellout" and a "self-loather."

The film simply asks: "Why is there no respectful disagreement in the black community? Why are great black thinkers like Thomas Sowell, Walter Williams and Shelby Steele ignored or marginalized by the black and mainstream media?" Despite impressive, decades-long bodies of work -- columns, books and speeches -- Sowell, Williams and Steele are completely unknown to many Blacks, and not just young Blacks.

"Uncle Tom" asks, why can't these points of view be debated? Are Black conservatives any less interested in the advancement of the Black community than Black liberals? If not, why the vitriol? Why the derision?

The early reviews of "Uncle Tom" exceeded our wildest expectations. As of this writing, the movie site IMDb shows that over 350 viewers rated the film, giving it an overall rating of 9.7 out of 10. One hundred and thirteen posted written reviews, with all but one giving it 10 stars out of 10. (The one exception gave it a 9.)

"This may be the best documentary I've ever seen -- I am a professional filmmaker. This is one of, if not the most important film of the 21st century. I do not say that lightly. Everyone has to see this. It's truly life changing. It's a film full of heart, victory, unity, truth, and true patriotism -- You'll never be so proud to be an American. Don't pass on it."

"This movie is like an alarm clock -- Some people might not like what they are hearing when they watch it but that doesn't change the fact that it is time to wake up. I applaud the courage, the genius, and the love and compassion that went into the making of this important film."

"Thank you for giving us the opportunity to watch a wonderful film that rejects the victim narrative that the Democrats try and push on the black community. This film is so powerful and deserves so much positive recognition. I had high expectations for this film, and it EXCEEDED my expectations!!"

"A clean, wonderfully informative production. I was aware of some of the notions put forward in this film but by no means whatsoever was I ready to be immersed with just so much factually unequivocal depth! Truly eye-opening and fantastic to see such a diverse array of characters, each with their own insights and anecdotes. A straightforward and rather in-your-face approach to demolishing the left's insistence on minority control. Superb production, cast and motive. Regardless of your political leaning, this no holds barred piece definitely gets the mind racing and questioning all that we are inundated with in the media."

"This honestly made me cry. I cannot believe I didn't know this!!! The denigration of the black family by liberal supremacy makes me sick. Aren't these the same people who control all of Hollywood, 95% of the media, and big tech. They have used violence and trickery to gain their power ... my heart is aching!"

"A MASSIVE EYE OPENER! I'm a documentary junkie and this is one of the greatest I've seen. Extremely well put together, talking to some truly inspirational, intelligent, and motivated individuals who in my opinion holds the key to elevate Americans to the next level, regardless of race. Will be watching again."

To see "Uncle Tom," just go to UncleTom.com. Let me know what you think.