Midterms: Republicans Had a Great Story to Tell - and It Staved Off Disaster

Larry Elder
|
Posted: Nov 08, 2018 12:01 AM
Share   Tweet
The opinions expressed by columnists are their own and do not necessarily represent the views of Townhall.com. 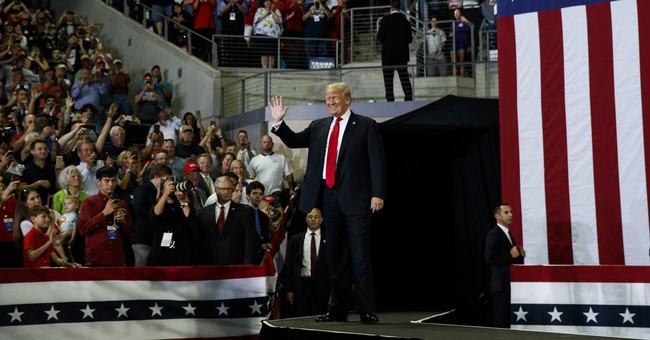 As expected, Democrats regained control of the House of Representatives. But the much-anticipated "blue wave" failed to appear. History shows that the first midterm election for the party in the White House usually results in a loss, often a big loss, in that party's House members. President Barack Obama, for example, lost 63 seats in the House and 6 seats in the Senate in the 2010 midterms. In the 21 midterm elections held from 1934 through 2014, the President's party has gained seats in both the Senate and the House only twice: during Franklin Delano Roosevelt's and George W. Bush's first midterm elections. The 2018 GOP House lost seats, more than the 23 seats Democrats needed to flip, but not nearly the thumping the Democrats hoped for.

Forty Republicans -- three senators and 37 representatives -- chose not to run for re-election in 2018, while another 14 left their offices early or announced their resignations. This hurt. Only 18 Democrats declined to seek re-election, with another four leaving office early or resigning. From 1964 through 2016, 85 to 98 percent of House incumbents seeking re-election won.

In January 2018, NPR ran a story about the record number of House Republicans who decided not to seek re-election. Rep. Charlie Dent, R-Penn., according to NPR's Kelsey Snell, "didn't want to spend the next 10 months talking about or defending President Trump." Dent said: "You know, this campaign cycle, 2018, will simply be a referendum on the President. We'll be talking about him and his latest tweet or comment or an incendiary remark or whatever. So you're really not speaking about or talking about major issues." In short, Trump would be on the ballot in the midterms, and Dent, likely echoing the fears of fellow Republicans who chose not to run, wanted no part in defending Trump.

But on Tuesday, Democrats lost several marquee races where high-power surrogates like Barack Obama, Joe Biden and Oprah Winfrey campaigned. Democrat Beto O'Rourke lost his Texas senate bid to Ted Cruz. Democrat Stacey Abrams appears to have lost the Georgia governor's race. Democrat Andrew Gillum lost the Florida governor race to Republican Ron DeSantis, for whom Trump energetically campaigned. For the most part, where Trump campaigned, his candidate won. That Republicans held off the much anticipated giant blue wave and limited the gubernatorial losses to about a half a dozen reflects the degree to which the media, and many Republicans, still underestimate Trump.

Remember when serious pundits urged electors to refuse to certify Trump's election? Several congressional Democrats refused to attend Trump's inauguration, where the new President gave an address that Democrats and many in the media described as "combative" and "divisive" and "partisan." Some critics even predicted that, because of Trump's alleged "mental instability," a cabinet official or another "adult in the administration" would invoke the 25th Amendment. This drumbeat grew so loud that Trump's White House doctor discussed the results of Trump's physical at a press conference, where reporters asked about Trump's mental fitness to serve. Pundits and cable hosts practically ran out of adjectives while calling Trump "racist," "sexist," "anti-Semitic," "homophobic" and "xenophobic."

When the deputy attorney general appointed Robert Mueller to investigate the allegation of a Trump-Russia "collusion," Trump-haters began the countdown on when they expected Trump to resign, one step before Mueller outed him as an election cheat. Rep. Maxine Waters, D-Calif., called for Trump's impeachment almost from the moment he took office.

When Trump visited Speaker Paul Ryan, Democratic House members not only heckled, but some held up signs critical of Trump and his policy of separating families that tried to enter through our southern border. CNN's Don Lemon has called Trump "racist." According to "nonpartisan" Pew Research Center, 90 percent of broadcast networks' (ABC, CBS and NBC) news coverage of Trump has been negative. With the exception of Fox News, Trump takes a nightly battering on cable news.

But a funny thing happened on the way to this year's midterms. The stock market kept hitting record highs. The majority of Americans, for the first time in years, felt confident about their personal economic condition and future. 2018's first two quarters of GDP growth came in at 2.2 and 4.2 percent, with the third quarter registering a strong 3.5 percent. In October, 250,000 jobs were created, exceeding expectations. Black unemployment reached its the lowest percent since the Bureau of Labor Statistics began tracking unemployment by race in the '70s. An NAACP poll released in August put Trump's approval rate at 21 percent for blacks. The Nov. 5, 2018 Rasmussen daily Presidential Tracking Poll showed Trump with an approval rating 5 points higher than Obama's at the same point in his presidency.

Republicans had a good story to tell, and it staved off disaster. Had fewer GOP House incumbents decided not to run, the results would have been even better for Republicans. Yes, for the next two years, Trump will face investigation after investigation. But for the Republican Party as a whole, Tuesday could have been worse, much worse.