Larry Elder
|
Posted: Jan 25, 2018 12:01 AM
Share   Tweet
The opinions expressed by columnists are their own and do not necessarily represent the views of Townhall.com. 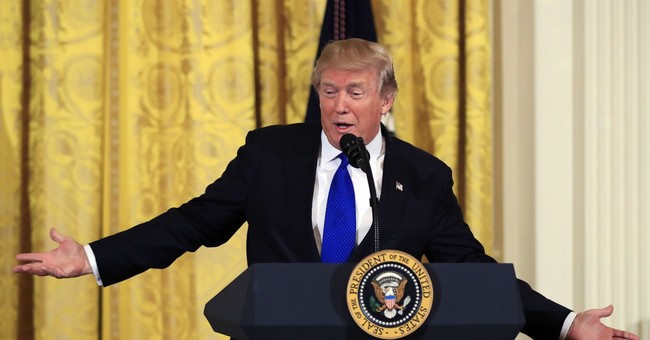 When Trump's apparent use of the word "s---hole" makes headlines, one cannot help but recall the analysis of the media provided by President Obama's deputy national security adviser and foreign policy speechwriter. In discussing his perception of reporters' ignorance of foreign affairs, Ben Rhodes said: "Most of the outlets are reporting on world events from Washington. The average reporter we talk to is 27 years old, and their only reporting experience consists of being around political campaigns. That's a sea change. They literally know nothing."

But in Trump's case, critics claim his recent use of profanity corroborates, underscores and advances the narrative that the President is "racist." Here's what happened. In a "bi-partisan" White House discussion about the immigration debate, Trump reportedly referred to Haiti and African countries as "s---holes," and wondered why America takes in more immigrants from Africa than from countries like Norway.

Out came the pitchforks. One Democrat, Texas Rep. Al Green, not only pronounced the President "racist," but says that his alleged racism constitutes grounds for impeachment, apart from the findings of the special counsel.

What about President Obama?

He, too, made a Trump-like statement about the cultural superiority of one group over another. In April 2016, The Atlantic published an article about President Obama's foreign policy challenges, a frustrated Obama complained about the difficulty of achieving peace in the Middle East. Obama said, "If only everyone [in the Middle East] could be like Scandinavians, this [achieving peace] would all be easy."

Note to Rep. Green: Norway is Scandinavian country. Again, Obama made the same point as did Trump -- yet no one called Obama "racist."

Obama also called Libya, an African country, a "s--- show" following his admittedly failed military intervention in 2011. He blamed its tribal divisions: "The degree of tribal division in Libya was greater than our analysts had expected. And our ability to have any kind of structure there that we could interact with and start training and start providing resources broke down very quickly."

Republican Sen. Lindsey Graham used harsh language in describing countries to our south. Graham, in 2013, said: "The people coming across the southern border live in hellholes. They don't like that. They want to come here. Our problem is we can't have everybody in the world who lives in a hellhole come to America." Where were the racism-watchers then?

Few Trump-haters appear to have read "The Dark Side of Camelot" by former New York Times writer Seymour Hersh. He writes that President John F. Kennedy was warned about a wealthy, high-profile Democrat, who not only supported another candidate but tried to get evidence of Kennedy's alleged extra-marital liaisons. Later, when some Senators pushed for a high-profile ambassadorship for this Democratic donor, Kennedy did not forget. "I'm going to f--- him," Kennedy said. "I'm going to send him to one of those boogie republics in Central Africa." "Boogie republics" does not sound like a term of endearment.

Then there's Kennedy's treatment of Sammy Davis Jr. The gifted singer/actor/dancer/musician/comedian campaigned hard for JFK in the 1960 presidential race, and even postponed his wedding to a white actress until after the election. Davis feared his marriage might alienate voters who disapproved of interracial marriage, so he waited until after Kennedy won to get married. But after Kennedy got elected, the newly married Sammy was uninvited to Kennedy's inauguration, to appease those offended by the high-profile marriage.

As for Trump's "racism," he must be putting forth policies to harm blacks, right? But Trump seeks to empower urban parents through education vouchers so that parents can opt out of an underperforming public school. Trump wants to stop illegal immigration. Economists like Harvard's Jorge Borjas claim that urban American workers without high school diplomas face competition for jobs against unskilled illegal workers, who also put downward pressure on the wages of these U.S. workers.

In an era where activists unfairly brand police as racist profilers, Trumps supports the cops. The bogus Black Lives Matter movement has caused an increase in murder and other types of violent crime in cities like St. Louis, (right outside Ferguson) and Baltimore. The victims of this increased crime are disproportionately black -- the very people the activists purport to care about. In one year of the Trump administration, blacks have seen an increase in the labor force participation rate and blacks are enjoying record low levels of unemployment.

If Trump wants to practice racism, his incompetence has been staggering.