Larry Elder
|
Posted: Dec 22, 2016 12:01 AM
Share   Tweet
The opinions expressed by columnists are their own and do not necessarily represent the views of Townhall.com. 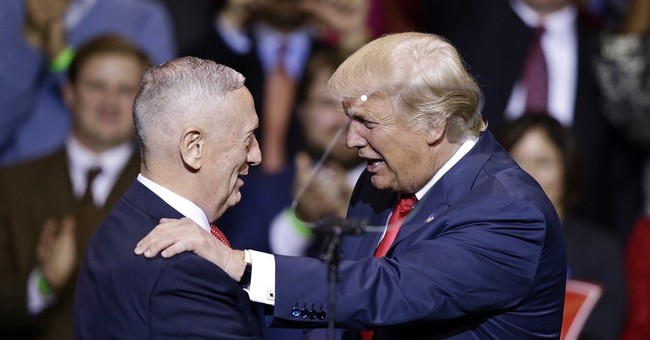 Trending
Last week, I received this email from Rennae:

"Larry Wayne Lindsey is from Colorado. He has been a staunch supporter of President-elect Donald Trump, who had a big rally on the state capital steps in Colorado, where Larry did security.

"Larry is a Marine veteran who served with honor. He has also been battling cancer for about three years. Three days ago, they only gave him the night to live. I fear he won't get to see the inauguration. I am trying to get through a maze of people to see if we can get a call from President-elect Trump to Larry. It would mean so much to him.

"I never ask for much, but this would be an amazing gift for a man who is a true patriot and an inspiration to so many.

"Thanks, Larry. There is something about the guys named 'Larry.'"

Well, there's something about Marines, too. My dad was a Montford Point Marine. I wrote back:

"I sent your message along to a top aide to Mr. Trump. Obviously, I don't know what will happen. But let's give it a shot."

The following day, I received this message from Rennae:

"Thanks so much, Larry. He had a really tough night, but he is a warrior. You are better than the best! I owe you!

"Here is the message," she wrote, "that Larry Lindsey just posted."

"PJ said that Gen. Mattis asked if there was anything he could do for me ... imagine that for a moment, if you will, exactly what that meant to me. I said, 'Yes, sir, there is one thing. You can tell him I said Semper Fi and to give 'em hell!'

"What an honor to have the attention and concern of these courageous people who will be responsible for the rebuilding of this amazing country of ours. What a wonderful day today, with the tremendous outpouring of love and patriotism and birthday wishes from everyone!

"God bless you all, from the bottom of my heart!

Shortly after this Mr. Lindsey posted a video from his hospital bed. It was to be his last message:

"President Trump, Vice President Pence, and Gen. Mattis, I would like to say that the greatest honor of my life has been to wage this battle with you.

"I have been prouder of being a Marine than anything I have ever done in my life. Having a hand, in some small way, in fighting for my country has meant the world to me. There is no greater honor for me -- to have great men like you leading this country back to its foundation and back to God.

"Because with Trump, I have no doubt in my heart and in my mind that you will be perhaps the greatest president in the history of our country.

"Vice President Pence, I am so honored to call you my vice president. You are an incredibly good man, and probably the only vice president in 150 years to have any brains -- and I appreciate that about you. Your candor and your honesty, from both of you men, is much needed in this day and time.

"Gen. Mattis, sir, it appears that I am now out of ammunition, but I continue to fight with my last breath. I do not fear death because I know where I'm going, and I'm only going home for a rest. It's you people here, the good people of America, for whom I cry, my loved ones and my friends, and the sacrifices they continue to make in this fight to restore our country.

"I want you to know, each and every one of you, that we have taken on a challenge that has only just begun. The real battle lies ahead.

A few hours after this last post, according to his Facebook page, Marine Lindsey died peacefully in the arms of his wife Natasha at 10:45 p.m. on his birthday, Dec. 17.