Nancy Reagan: 'Do You Really Think People Will Say That?'

Larry Elder
|
Posted: Mar 10, 2016 12:01 AM
Share   Tweet
The opinions expressed by columnists are their own and do not necessarily represent the views of Townhall.com. 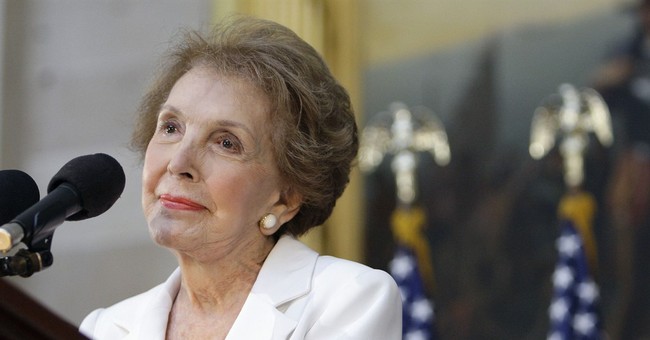 Trending
Editor's Note: The following column was originally published in 2004.

Larry Elder: Let me tell you what an honor this is. This is like meeting royalty.

Nancy Reagan: Thank you very much. Thank you.

Elder: Tell me what you consider your greatest accomplishment.

Reagan: My greatest accomplishment. Well, I think raising the awareness of the drug problem, traveling around and promoting that, and I think we did do some good.

Elder: The best part of being first lady?

Reagan: Oh, my. Well, the best part of being first lady is having the chance to travel to all the countries I never would have gone to, and meeting all the people I never would have met, and being a part of history was wonderful.

Elder: Mrs. Reagan, you were first lady for eight years. In eight years, lots of things happened. Tell me the most memorable moment you had in the White House.

Reagan: Well, I think his legacy was making the country feel good about itself again, making people feel good. There was a whole optimism that he exuded.

Elder: And is that the quality about Ron Reagan that you most admire -- his optimism?

Elder: Tell us what some of the others are, his qualities.

Reagan: Oh, his kindness, his ability to be a great communicator, to communicate with people -- all kinds of people, all different ages, it didn't make any difference. He just connected with them. He was a very romantic man, as those letters he wrote show. A wise man. I could go on and on. How long have we got? (Laughter)

Elder: The thing that people most misunderstand about Ron Reagan.

Elder: And, Mrs. Reagan, about you. Tell us a little bit about you growing up, any stories you want to tell us.

Reagan: Well, I was brought up in Chicago, and my father was a neurosurgeon. He was the first neurosurgeon in Chicago. And I was a nurse's aide, and I used to watch my father operate, which takes people a little aback when I say that. I graduated from school there, and then I went east to college, went to Smith College. Anything more than that? (Laughter)

Reagan: You know, I really wasn't anything, until I married Ronnie. I wasn't registered to vote. I knew nothing about politics, really nothing. So I can't claim to being really anything, or certainly having any influence over him. That I didn't.

Elder: Well, you were a quick study. (Laughter.) Let's talk a little bit about the Ronald Reagan Library. Why is it so important?

Reagan: Well, it's so important because, on the West Coast, or the whole West area -- usually all these things are in the East, you know -- there's nothing in the West. So here it is, for all the children to take advantage of, and they can learn so much from it. They can learn, I mean, there's everything here: Ronnie's letters, everything about his life and my life.

Elder: And finally, Mrs. Reagan, a similar question to one of the ones I asked you earlier about your husband: Twenty-five years from now, 50 years from now, a hundred years from now -- what do you want people to say about Nancy Reagan?

Elder: Thank you so much for your time. I appreciate it.

When the audio stopped rolling, I made a suggestion about her legacy -- that she loved her husband unconditionally, that she gave him confidence and the courage of his convictions, and that she maintained his spirit. She smiled and said, "Do you really think people will say that?"