The Paris Attacks and the Rise of ISIS 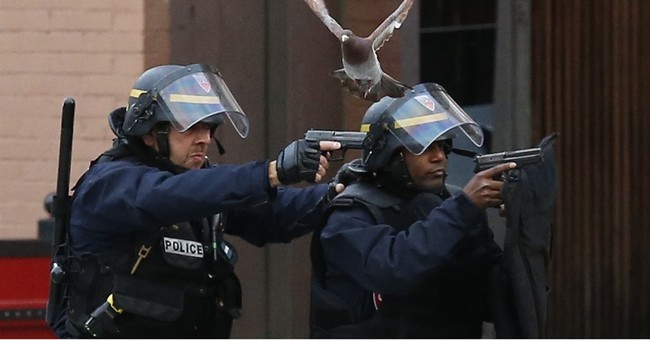 In the wake of the Paris attacks, let's examine the rise of ISIS.

During the last Democratic debate, Hillary Clinton gave this unchallenged "explanation" of why we left Iraq -- without a stay-behind force. She said, "I think that what happened when we abided by the agreement that George W. Bush made with the Iraqis to leave by 2011, is that an Iraqi army was left that had been trained and that was prepared to defend Iraq."

But in 2007, President George W. Bush issued this stark warning about a premature pullout from Iraq: "I know some in Washington would like us to start leaving Iraq now. To begin withdrawing before our commanders tell us we are ready would be dangerous for Iraq, for the region, and for the United States. It would mean surrendering the future of Iraq to al-Qaida. It would mean that we'd be risking mass killings on a horrific scale. It would mean we'd allow the terrorists to establish a safe haven in Iraq to replace the one they lost in Afghanistan. It would mean increasing the probability that American troops would have to return at some later date to confront an enemy that is even more dangerous."

President Barack Obama's apologists now say that, well, Obama simply executed the timetable that the Iraqis and President George W. Bush had agreed to before Obama took office -- and thus he pulled us completely out of Iraq.

Here are just a few of the holes in this cover-your-ass-and-blame-Bush narrative.

First, since when has Obama felt bound to anything George W. Bush agreed to?

After taking office, Obama immediately reneged on Bush's missile-defense deal with Poland and the Czech Republic. But when it comes to a stay-behind plan for us in Iraq, Bush tied Obama's hands? Please.

Second, former Vice President Dick Cheney, in October 2011, two months before Obama pulled out all the troops, said that the agreement envisioned a negotiation for a stay-behind force: "There was another provision in (Bush's status-of-forces agreement) that's very important, seems to have been ignored, which was that we would also reserve the right to negotiate with the Iraqis on some stay-behind forces. ... They're a new democracy; they're not very well organized yet. I worry that in the rush for the exit here, that we may in fact make it very difficult for them to succeed."

Third, as Max Boot, a senior fellow in national security studies at the Council on Foreign Relations, describes in a 2011 Wall Street Journal piece, Obama -- who ran on getting us completely out of Iraq -- never seriously tried to negotiate a deal to stay, didn't want one and found any convenient excuse, including blaming Iraq for its intransigence, to leave without a stay-behind force. "The popular explanation is that the Iraqis refused to provide legal immunity for U.S. troops if they are accused of breaking Iraq's laws," wrote Boot. "So why was it possible for the Bush administration to reach a deal with the Iraqis but not for the Obama administration? Quite simply it was a matter of will: President Bush really wanted to get a deal done, whereas Mr. Obama did not."

Fourth, if Bush tied Obama's hands why did so many push him to leave a stay-behind force? Then-Secretary of State Hillary Clinton pushed for a stay-behind force. According to the Daily Beast, "At the time of the negotiations, Clinton's State Department and the Obama White House were not on the same page. ... For Clinton, her State Department senior staff -- as well as for top officials at the time, including Defense Secretary Leon Panetta and CIA Director David Petraeus -- there was a national security interest in keeping thousands of troops in Iraq."

Army Chief of Staff Gen. Ray Odierno, upon his recent retirement, said that he, too, believes a stay-behind force could've dealt with ISIS: "I go back to the work we did in 2007 (through) 2010, and we got into a place that was really good. Violence was low, the economy was growing, politics looked like it was heading in the right direction. ... We thought we had it going exactly in the right direction, but now we watch it fall apart. It's frustrating. ... I think, maybe, if we had stayed a little more engaged, I think maybe it might have prevented it." Nothing about "hands being tied" by Bush or that Iraq pushed us out.

It's laughable now to hear Bush-hating critics -- who opposed the Iraq war from the start, who voted for Barack Obama because he promised to pull us completely out of Iraq -- now say they actually wanted a stay-behind force in Iraq. But the dastardly George W. Bush, who orchestrated a war they considered "dumb," tied their hands and prevented them from staying. Pass the barf bag.

Do the Bush-hating/Obama-protecting critics think Americans are stupid? Don't answer that.