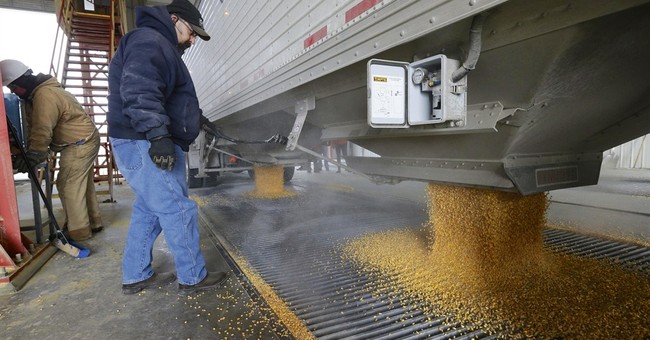 Can someone explain why the "party of limited government" continues, with a straight face, to support ethanol? Republican Sen. Chuck Grassley of Iowa says about the heavily subsided product, "Everything about ethanol is good, good, good."

Supporters of ethanol -- which we make from corn -- say it reduces our dependence on foreign oil, is cheaper and aids the environment because it burns cleaner than non-blended fossil fuels. In 1996, The New York Times wrote: "At a time when Congress has been overhauling the nation's systems of agricultural subsidies, and public officials across the country have considered huge cuts in benefits to big corporations, ethanol has been untouched. Largely through the efforts of (then soon-to-be 1996 GOP presidential nominee Sen. Bob Dole of Kansas), it has remained one of the most subsidized American industries."

Dole's office said, "As a national leader on agriculture policy, Sen. Dole is a longtime supporter of this clean-burning all-American renewable fuel to promote new markets for American grain, jobs for our nation's farm belt and energy self-sufficiency." The statement noted that Kansas contained 13,500 corn farms and four ethanol plants.

That was nearly 20 years ago. The rip-off continues.

The New York Times recently wrote about the wooing of deep-pocket Republican donors by the 2016 presidential hopefuls: "Some of the gatherings are expressly intended to bring candidates in line with the policy positions of donors on issues like government spending and foreign policy. While Mr. (Bruce) Rastetter's agriculture forum will cover a range of issues, much of the advocacy surrounding the event, including a 'V.I.P. press reception' featuring Iowa's Republican governor, is aimed at pushing the candidates to support the Renewable Fuel Standard, which is coveted by the ethanol industry."

Who is Rastetter? He's a "prominent 'super PAC' donor" who organized the Iowa Agriculture Summit where, per the Times: "Each (Republican presidential hopeful) will submit questions from Mr. Rastetter ... whose business interests range from meat processing to ethanol production."

How do the facts line up with the wondrous claims about ethanol -- clean burning, cheap and decreases our dependency on foreign sources?

Ethanol increases the demand for corn, which means corn prices go up. This causes prices for farmland to rise. It also raises the prices for animal feed, which makes food prices go up. Not just on meat -- prices have gone up on poultry and dairy products, as well as foodstuffs containing cornstarch, cornmeal, corn syrup and other corn products. Meanwhile, the U.S., which as recently as 2007 supplied two-thirds of the world's corn with its exports, now supplies only a little over one-third. And the amount of corn used to produce the ethanol to fill one SUV's gas tank could feed one person for one year.

Today, according to the USDA, ethanol accounts for roughly 6.6 percent of total transport fuel consumption, but consumes about 40 percent of the U.S. corn supply.

In 2007, Rolling Stone's Jeff Goodell wrote in "The Ethanol Scam": "Ethanol doesn't burn cleaner than gasoline, nor is it cheaper. Our current ethanol production represents only 3.5 percent of our gasoline consumption -- yet it consumes twenty percent of the entire U.S. corn crop, causing the price of corn to double in the last two years and raising the threat of hunger in the Third World. And the increasing acreage devoted to corn for ethanol means less land for other staple crops, giving farmers in South America an incentive to carve fields out of tropical forests that help to cool the planet and stave off global warming."

The ethanol-increased demand for corn also entices more farmers to plant more land with corn, instead of balancing their risk by planting other crops. Goodell wrote: "Corn is already the most subsidized crop in America, raking in a total of $51 billion in federal handouts between 1995 and 2005 -- twice as much as wheat subsidies and four times as much as soybeans. Ethanol itself is propped up by hefty subsidies, including a fifty-one-cent-per-gallon tax allowance for refiners. And a study by the International Institute for Sustainable Development found that ethanol subsidies amount to as much as $1.38 per gallon -- about half of ethanol's wholesale market price."

What about the environment?

Goodell writes: "But as a gasoline substitute, ethanol has big problems: Its energy density is one-third less than gasoline, which means you have to burn more of it to get the same amount of power. It also has a nasty tendency to absorb water, so it can't be transported in existing pipelines and must be distributed by truck or rail, which is tremendously inefficient."

Ethanol is a rip-off, pure and simple. Aside from fattening the coffers of ethanol producers like Archer Daniels Midland, it is not justifiable on any basis, not least from a Republican Party that supposedly believes in free, unfettered, non-subsidized markets. Ethanol is an inexcusable theft from taxpayers. That the Republican leadership still supports this undermines the "Republican message" and makes the party look like a band of hypocrites.