Ferguson: Not Even An O.J. Jury Would Convict Officer Wilson 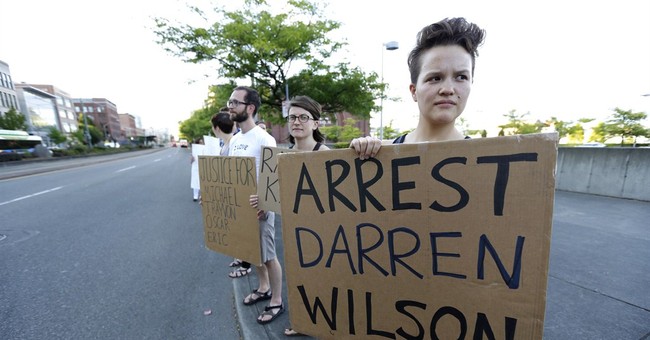 Ferguson, Missouri, police officer Darren Wilson is neither Mark Fuhrman nor Barney Fife. Based on what has been presented so far in the media, not even an O.J. Simpson juror would find Wilson guilty of murder.

Many simply have chosen to believe that teenager Michael Brown was "executed" or "shot several times in the back" -- the evidence can wait. Witnesses who definitively assert that officer Wilson "shot him in the back" have been contradicted by the Brown family's own medical expert, respected pathologist Dr. Michael Baden, who conceded the wounds could be consistent with Brown charging toward Wilson, not running away.

Baden, asked by the family to provide an independent autopsy, saw several bullet wounds; all but one clearly came from the front. This is important because it refutes the contention that Brown was shot several times in the back, as stated by witnesses.

Was Brown running away, "executed" by being "gunned down in the back"? At least two witnesses, so far, claim that, no, Brown charged toward officer Wilson, a version consistent with Wilson's apparent description of what happened.

Did officer Wilson stop Brown because he thought Brown was a suspect in a robbery? The Ferguson police chief, in a press conference, said that Brown was stopped because he was walking in the middle of the street. The chief, however, later told the media that at some point officer Wilson apparently saw Brown carrying cigars and "made the connection" to the report of a robbery that Wilson heard about minutes earlier on his radio.

Talk about a reasonable doubt case.

If it's true that the 6-foot-4-inch, nearly 300-pound Brown struggled with the officer in the squad car, and if it is true that after breaking free Brown turned around and came back at Wilson, the officer had every reason to fear for his safety and for the safety of others. After all, there had been a struggle in the police vehicle over the officer's gun, during which at least one shot was fired, although witnesses contradict each other or have given different versions about the initial contact in the vehicle.

In any case, three investigations -- one by the FBI -- guarantee the case will be thoroughly examined, not "swept under the rug" as some "activists" predicted.

In his novel "Bonfire of the Vanities," Tom Wolfe writes about the media pursuit for "The Great White Defendant." This is a man, accused of wrongdoing, whom the media, "activists" and especially those who just love watching The Man squirm and "get what's coming to him," can all agree to hate.

The pursuit of the Great White Defendant absolves us from discussing the 2012 murder stats, when 6,454 blacks were murdered -- accounting for over half of all homicide victims in this country. Almost all were killed by other blacks. Chicago in 2012 averaged 10 murders a week, mostly blacks killed by other blacks.

No concrete data exists on how often blacks are killed by officers. One left-wing web site put the number at 313 blacks killed in "extrajudicial shootings" by cops, "security guards" and "vigilantes" in 2012, claiming 136 of them were unarmed.

While media covered Ferguson as if it were D-Day, there were other incidents of "racial" news that never became national stories:

A rabbi in Miami, walking to the synagogue, was murdered by two young black males. Crime unsolved.

A black homeless man was stabbed to death by six illegal aliens last month. No national debate on porous borders and the crime committed by illegals?

A 72-year-old white man is seen on video knocked down by a young black man ?- apparently part of the so-called Knockout game.

In Philadelphia, a black park ranger was brutally beaten by a black skater when the ranger told him skating was not allowed there. All was captured on video tape.

For the third time in as many years, a Chinese graduate student at USC was murdered in South Central Los Angeles last month. Four teens have been arrested, including one illegal alien. Were these Chinese students racially profiled? No national debate on the issue of crime committed by illegal aliens who enter through our porous borders?

By all means, investigate the Ferguson shooting. But where's the perspective?

The No. 1 cause of preventable death for young black men is homicide. For whites, it's unintentional injuries, such as car accidents. And if a high percentage of the kids in a neighborhood are without dads, and if those children are 20 times more likely to end up in jail, isn't this a far bigger problem than the rare instance in which an unarmed black person -- unjustifiably or not -- is killed by a cop?